Endocrinology and immunology: the benefits of cross-talk

Sex-based differences in immune responses contribute to variations in the incidence of inflammatory disorders, including a greater susceptibility to autoimmune disorders in women and a greater susceptibility to infectious diseases in males.1 Certain differences are present throughout life, while others are only apparent after puberty, suggesting both genes and hormones contribute to different immune responses between the sexes.

BROUGHT TOGETHER BY SEX BALANCE

Despite the known importance of these interactions, relatively little cross-fostering of ideas has occurred between the fields of endocrinology and immunology. A major step change came in 2014, when National Institutes of Health Director Francis Collins announced changes to funding policy that required sex balance in cell and animal studies.2 This meant that many researchers were now required to use both ‘simple males’ and ‘complicated females’ when dissecting biological mechanism.

This approach was not new to endocrinologists, but considering sex as a biological variable is still often overlooked in the field of immunology, with fewer than 10% of articles reporting the sex of the animal or human subjects analysed.3 Nevertheless, recent observations in macrophage immunology have highlighted a key role for sex in controlling their behaviour. 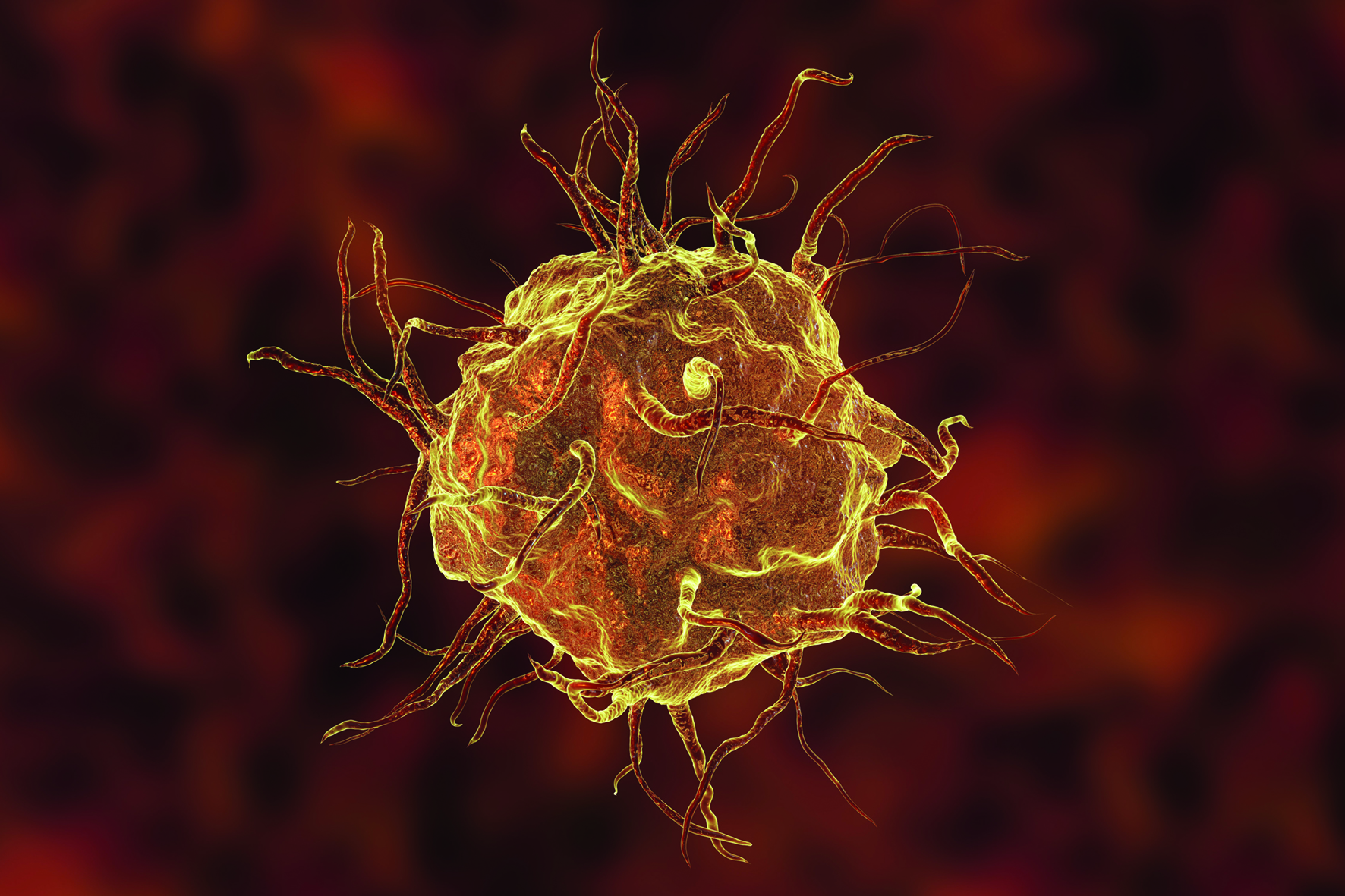 One such observation was that the rate of replenishment of macrophages in the peritoneal cavity differed between male and female mice. The ontogeny of tissue macrophages has attracted a lot of attention in recent years, following the revelation that macrophages in some organs can persist for much of adult life through self-renewal, without the need for replenishment by monocytes in blood. However, while it was known that the relative contribution of self-renewal versus replenishment by monocytes is very much tissue-dependent, if and how sex may influence these processes had never been addressed directly.

When macrophage immunologists Calum Bain and Steve Jenkins were investigating these processes in the peritoneal cavity, they found that the rate of replenishment was much slower in females than in males. Importantly, this difference only became apparent after puberty.4 They thought this phenomenon was something to do with ovarian function, probably oestrogens, so sought our advice as endocrinologists on how they could test this.

At this point, we were also struggling to interpret our data characterising the macrophage compartment of the uterus using a macrophage reporter mouse. Thankfully, consulting with macrophage experts such as Calum and Steve quickly helped us to better understand our data, assess expression of some key surface markers and move our paper forward to publication later that year.5 Figuring out the sex dimorphism in peritoneal macrophage turnover proved to be less straightforward.

ACCOUNTING FOR THE OESTROUS CYCLE

Typically, males are often used in animal model selection, due to concerns about confounding contributions from variations in females across the oestrous cycle. Limiting variables is an essential approach to defining physiological mechanisms, but accounting for the oestrous cycle is not a trivial task. Depending on your experimental model, this can also be a resource-intensive way to show not very much. Unfortunately, we found that this was the case for peritoneal macrophage turnover. However, reassuringly, this was consistent with previous meta-analysis that showed, for most applications, female mice tested throughout their hormone cycles display no more variability than males.6

'Consulting with macrophage experts such as Calum and Steve quickly helped us to better understand our data, and move our paper forward to publication.'

We next turned to the ovary itself, taking a standard approach to ovariectomise and then administer replacement oestradiol to the mice. However, we added two further arms that were important to consider from an immunological perspective. First, given the inflammatory nature of surgery, we performed a sham ovariectomy procedure to account for the effect of surgical intervention in the peritoneal cavity. Secondly, we also performed unilateral ovariectomy, i.e. removed only one ovary, to account for the possibility that changes in peritoneal macrophage turnover could be due to migration to the ovary. This didn’t make sense from an endocrinological perspective, as we knew that hypothalamic-pituitary- gonadal feedback would compensate for the loss of ovarian function, but if the ovary was functioning as a ‘sink’ for peritoneal macrophages, we would expect to see a graded effect between loss of one or two ovaries. 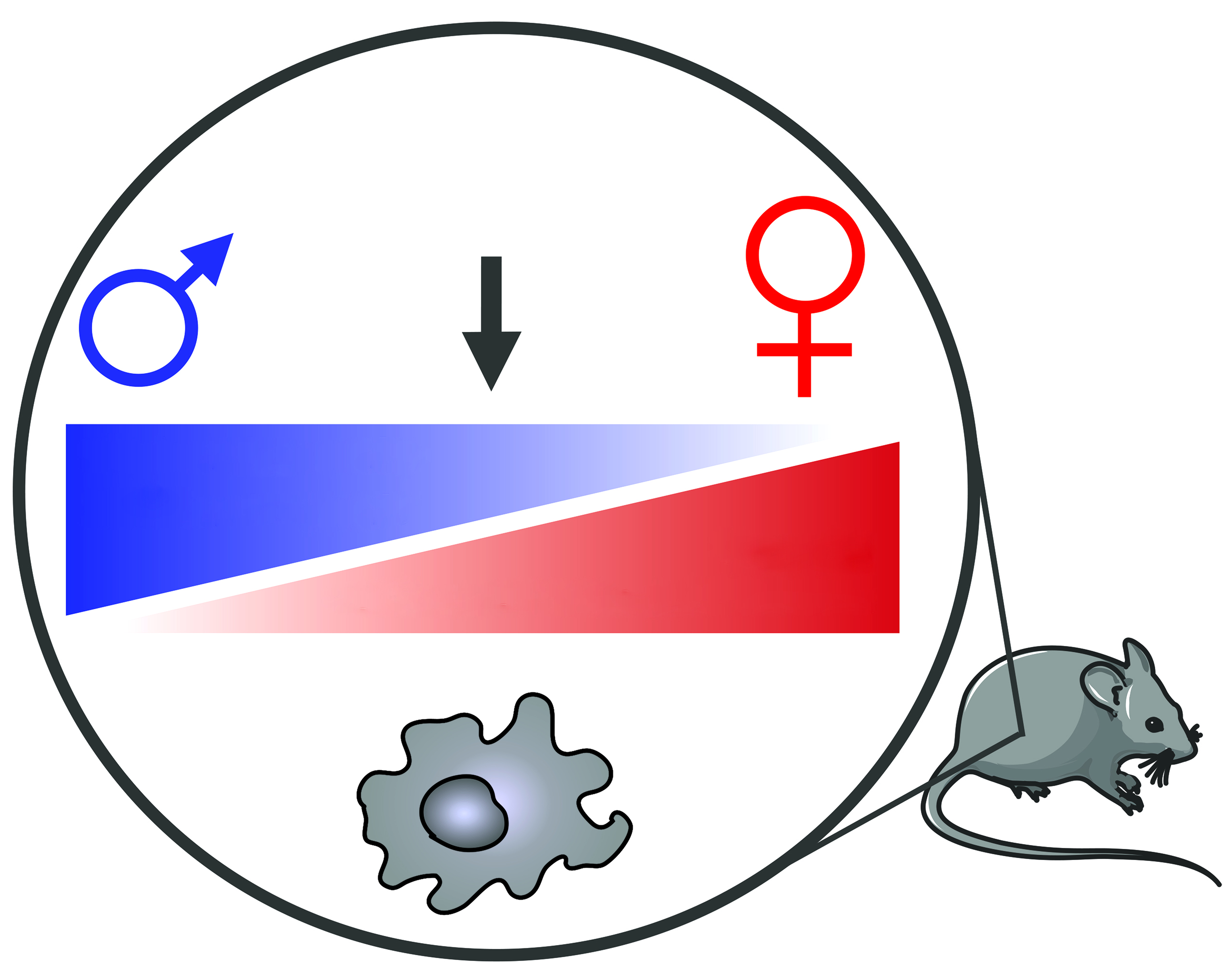 The behaviour of macrophages in the peritoneal cavity is influenced by the sex of the organism. Credit: Calum Bain and Servier Medical Art

When initial experiments showed that complete ovariectomy increased macrophage turnover, we were excited, but when it turned out that exogenous oestradiol could not rescue this effect we were surprised. We were also surprised to find that both sham-operated mice and unilateral ovariectomy showed increased peritoneal macrophage turnover – although this was not as pronounced as that induced by complete ovariectomy. These experiments told us two very important things: that surgery itself changed peritoneal macrophage turnover and that ovarian factors other than oestradiol drove the dimorphic replenishment kinetics.

Unfortunately, we were not in a position to investigate the myriad ovarian factors that could be involved: progesterone? testosterone? inhibin? As is often the case, the new data generated more questions than we could reasonably answer.

The project moved on to using transcriptional profiling to define functional differences in male versus female peritoneal macrophages. Together, we found that sexually dimorphic differences in peritoneal macrophages contribute to differences in the ability to protect against pneumococcal peritonitis between the sexes. This may account for the known dimorphism in women, who are less likely to get peritonitis and less likely to suffer adverse outcomes following surgery than males. The work was published in June 2020, some 4+ years since the first ‘simple’ experiments were planned.7

An understanding of how hormones, genetics and development can impact on inflammatory processes is required to investigate mechanisms of sexually dimorphic phenomena. An acute example of this is the ongoing SARS-CoV-2 pandemic, with sex affecting the severity of clinical outcomes for COVID-19 patients. Thus, bringing expertise in endocrinology and immunology together is of critical importance to moving both fields forward and for uncovering clinically important mechanisms.

In our studies, we learned that sex is important, but it’s also complicated. Working together moved our research forward in new directions. It was a long road but, along the way, the research supported training of students and led to new publications and grants. Apart from anything else, it was pretty good fun!