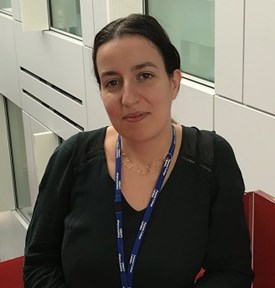 Genome-wide association studies are uncovering disease-associated genetic variants at an unprecedented pace. The majority of these variants are noncoding, which makes their interpretation challenging. At the same time, large consortia have released vast amounts of data, particularly transcriptomic and epigenomic, for many human tissues and cell types. This webinar will provide an overview of the online resources that we can now exploit to prioritise likely disease causal variants, and how to use them to construct robust hypotheses for future experimental investigations.

Dr Inês Cebola is a molecular biologist with a strong interest in understanding how non-coding sequences affect disease risk. She spent 8 years in Prof Jorge Ferrer’s team, in which she investigated how sequence variation in pancreatic transcriptional enhancers can contribute to both rare and common forms of diabetes. In the past few years, she applied genome editing in pancreatic beta cells to investigate 3D chromatin interactions between enhancers and their target genes. She is now an Advanced Research Fellow at Imperial College London, where her group is applying functional genomics approaches to investigate genetic factors contributing to metabolic disease.

You must register before 12 noon on Tuesday 22 September to ensure you receive the viewing link.

To honour individuals who have helped to significantly advance the field of endocrinology. Seven medals are available each year.