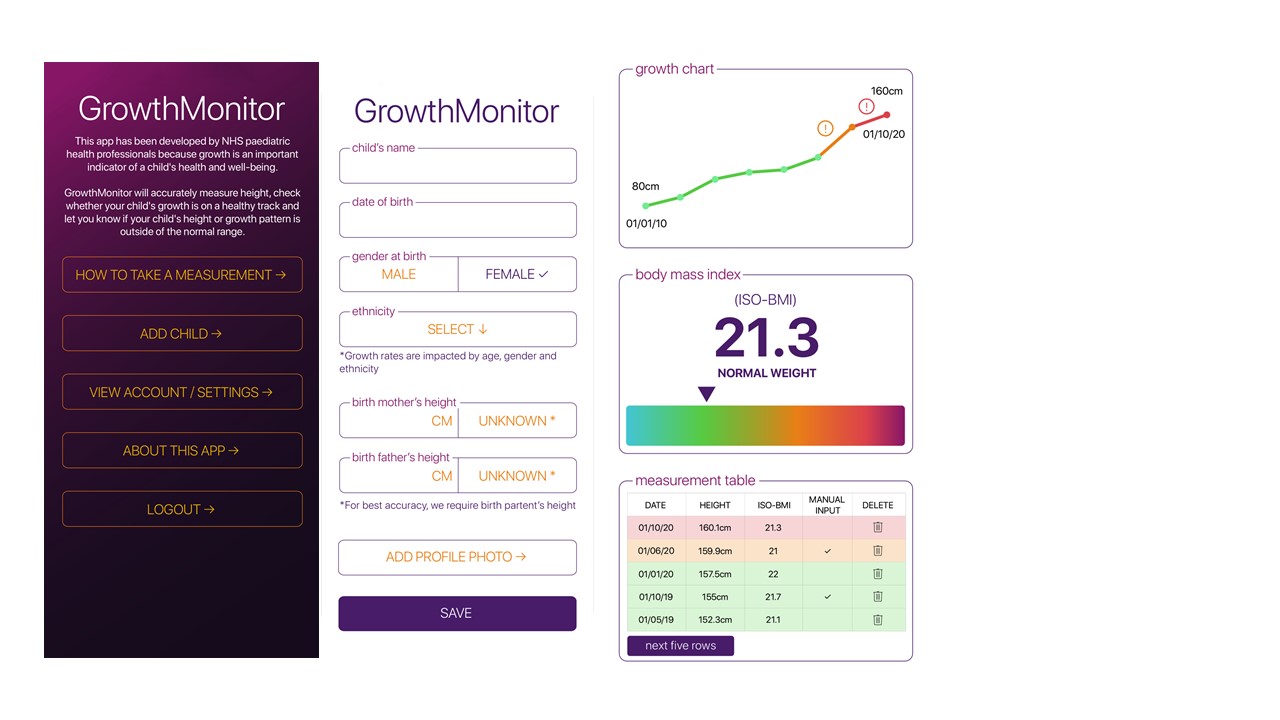 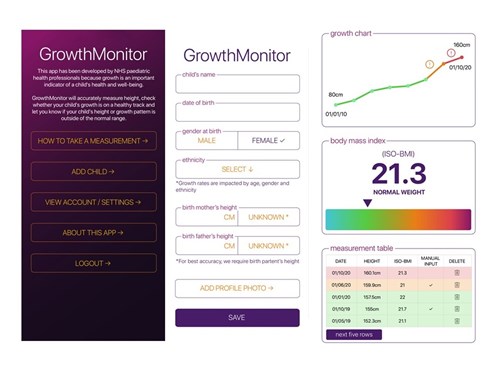 A ground-breaking new, mobile phone app, ‘GrowthMonitor’ places the accurate measurement of children’sheight in the hands of parents and carers. Preliminary data presented at the Society for Endocrinology annual conference in Edinburgh suggests that the app could reliably identify treatable growth disorders, much earlier, with significant improvements in child health.

Childhood growth is a strong indicator of health and well-being in children, but delays in the diagnosis of growth disorders are common in the UK. In contrast to many European health systems, monitoring child growth has not been a priority in the UK and serious, treatable conditions are often diagnosed late. Growth failure may be the first and only sign of many chronic childhood diseases or indicate a specific growth disorder such as growth hormone deficiency (1 in 4,000 children), Noonan and Turner syndrome (each 1 in 2,500 children) and SHOX deficiency (up to 20% of undiagnosed short stature).

A reliable and accurate method for parents and carers to monitor growth at home could be a cost-effective and convenient strategy to identify those children in need of medical referral, empowering parents, raising awareness and reducing pressure on primary care services.

An interdisciplinary group, led by Professor Helen Storr, at Queen Mary University London, has developed a user-friendly app called ‘GrowthMonitor’ to do just this. Research Nurse, Dr Thilipan Thaventhiran, led the pilot testing of the ‘GrowthMonitor’ app in 79 children, showing that height data measured by the app were highly accurate when compared to gold standard clinic stadiometer measurements. The app uses a simple traffic light system, based on predetermined threshold heights, to inform parents that growth is either normal (green), to continue monitoring (amber) or to seek medical advice (red).

Dr Thaventhiran believes “The ‘GrowthMonitor’ app technology could transform our approach to childhood growth monitoring, by empowering carers to identify growth problems early, enabling much earlier diagnosis and treatment of growth disorders. It could also provide reassurance to parents whose children are growing normally thereby reducing unnecessary anxiety and referrals to paediatric services.”

Following the positive pilot data obtained in a hospital setting, further testing is now underway assessing the app’s usability in the home environment. This phase is critical in evaluating the app in the hands of parents and carers, away from the hospital.

Project lead, Professor Storr says; “In line with the government drive to digitise healthcare, this type of app-based technology provides a model for healthcare innovation which is both cost-effective, convenient, accurate and reliable. Engaging patients, parents and carers in monitoring childhood growth is empowering and raises awareness of important and potentially treatable conditions”

Objective. Develop and test the accuracy of GrowthMonitor, an app which enables families to measure a child’s height at home as a cost-effective alternative to primary care growth monitoring.

Conclusion. Our preliminary data suggest that the GrowthMonitor app produces accurate, reliable height measurements. This technology could transform the approach to growth monitoring and facilitate early referral/diagnosis of growth disorders.

This work was funded by the Grant for Growth Innovation (GGI) and Barts Charity.

The poster “Development and testing of a novel ‘GrowthMonitor’ Smartphone App for growth monitoring and the detection of growth disorders” was presented at SfE BES 2021 in Edinburgh, UK on Monday 8 November 2021.

The Society for Endocrinology’s annual conference, SfE BES 2021, was held at the Edinburgh International Conference Centre on 8-10 November 2021. The conference featured some of the world’s leading endocrine researchers, nurses and clinicians coming together to exchange knowledge, share experiences and strengthen collaborations across our global community of endocrinologists.

Endocrinology in the news