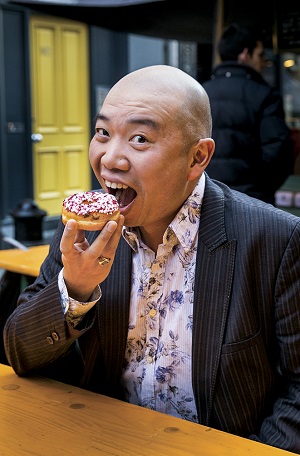 Increasingly, when we apply for grants or promotion, we are asked to define our ‘pathways to impact’ in the former and to describe our actual impact in the latter. A significant portion of this impact will involve public engagement, which often seems a waste of time to many of us. However, it is useful to remember that, while only 0.00001% of the population will ever read our papers, the other 99.9% pay for our salaries and fund our research. I would therefore argue that it is our duty to engage with the public and let them know, particularly in these times of financial uncertainty, what their tax £/€/$s are being spent on.

In recent years, my public engagement ‘weapon of choice’ has been TV broadcasting. I started small, with brief appearances as a ‘talking head’. Then, through a series of serendipitous events, it has – unexpectedly and at great speed – snow-balled into a full-blown presenting gig.

While the vast majority of you would shudder at the thought of having your body mass index and body fat percentage measured and broadcast on national TV (which I did for the BBC’s ‘Horizon’; I can report that my wife was thrilled), many of you will be interviewed on camera for your expert opinion at some point in your careers.

WHEN THE PHONE RINGS...

There are two distinct stages to consider when you first receive that phone call asking for your opinion on some contemporaneous finding.

The first and most important is to refine your message. Is it couched in the appropriate language for your target audience? Are you being interviewed for Channel 5, Sky, Channel 4, BBC1, BBC2 or BBC4 (I list these in order of increasing editorial sophistication)? Is it succinct enough? This is critical, as will become clear below.

The second and, to many, most nerve-wracking, is filming day. I thought it would be useful to demystify the process a little, so that when your moment in the spotlight arrives, you’ll find it easier to concentrate on preserving the message you are trying to convey to the public. 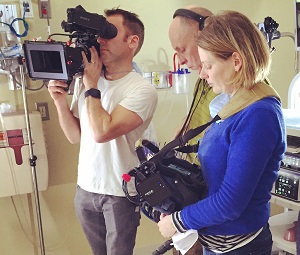 IN FRONT OF THE CAMERA

While there is much artistry in the framing of shots and in the editing, the actual mechanics of filming a sequence are quite standard.

(a) There will be ‘set up’ shots. These either set up the relationship between you and the presenter or, where there is no presenter, you as the expert in your lab/ward/office with a pipette/stethoscope/ computer.

(b) Then comes the filming of the interview. This will almost always be done with only one camera and, since you are the expert in residence, will begin with you. You will be instructed to ignore the camera and face about 5º off the lens (only the presenter ‘breaks the fourth wall’ and speaks to the camera). When asked a question, you will of course reply in a typically nuanced and fully caveated fashion. The director, perhaps sporting a (wo)man-bun or hipster-jacket or both, might say, ‘that was wonderful, well put, how eloquent ... now shorter’. This process is repeated interminably until your initially carefully crafted answer is converted into Haiku, e.g. ‘Fat is bad’. The camera will then turn to the presenter (if present) and film him/her asking the questions and nodding in a sage fashion. This is called ‘filming singles’.

(c) The final part of the process is filming the non-synchronised wide shots (‘non-sync wides’) and general views (‘GVs’). Non-sync wides are artistic shots taken from a distance, typically of you and the presenter sitting and talking, but where no synchronised sound is being recorded. GVs are atmospheric shots relevant to the locale and topic of the interview, and won’t involve you.

All of this footage is then edited down into one seamless sequence. What will surprise you is that, while the whole process might have taken half a day, this only equates to about 1–2 minutes of actual broadcast material.

This is why it is absolutely critical that you have your message in a succinct form. With only 1 minute of screen time, the director is looking for your best and most relevant sound bite (although they never actually annunciate this to you). So resist the temptation to blab on, otherwise the piece of information that is edited and used may not fully reflect the message you want to get across, or indeed mention it at all.

If, however, you have already refined your messages into sound bites (of under 10 seconds – I am not kidding), and you keep repeating these throughout the interview, then they are more likely to be used unedited. This is a very useful strategy that I picked up early on in order to maintain some editorial control in a process which is inherently uncontrollable (to us experts at least).

Of course, this can all be quite stressful and is clearly not to everyone’s taste and disposition. If, however, it is suited to your temperament, and is handled correctly, then the potential audience reach – and therefore your impact – could be very large indeed.

Giles has appeared on several BBC TV programmes, including ‘Horizon: Why are we getting so fat?’ and ‘Horizon Special: What’s the right diet for you?’