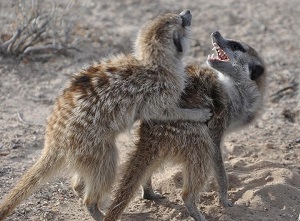 Differences in reproductive hormone concentrations between the sexes are the norm in vertebrates, with males typically exhibiting an androgen bias and females an oestrogen bias. Although these differences can be reduced in female-dominant species, typically the most dominant females still exhibit lower androgen profiles than males.

Davies et al. measured sex hormone concentrations in the meerkat (Suricata suricatta), an aggressively dominant co-operative breeder, where the alpha females produce over 80% of pups that survive until adulthood. They found unusual hormone patterns in both sexes, with males exhibiting high oestrogen levels (relative to subordinate females) and females having higher androstenedione levels and equivalent testosterone levels when compared with males. While hormone profiles did not significantly differ between males, more dominant females exhibited significantly higher androgen levels than their subordinate counterparts.

This is the first example in vertebrates of such an unusual reproductive hormone balance between the sexes. Higher levels of androgens in the female may underlie natural history traits of female aggression and reproductive skew exhibited by this species.