The usefulness of radioiodine ablation following surgery is a controversial subject. There is some debate about which patients with differentiated thyroid cancer (DTC) should receive it and at what dose. Most endocrinologists, however, would agree that the successful treatment of recurrent and metastatic disease with radioiodine is crucial for a good prognosis. Outcomes for advanced disease which no longer takes up radioiodine (radioiodine refractory DTC, RR-DTC) are often very poor, with dismal 10-year survival rates of <10%.

New systemic therapies for the treatment of RR-DTC, such as the tyrosine kinase inhibitors sofarenib and lenvatinib, have recently shown genuine promise in clinical trials. The DECISION (sofarenib) and SELECT (lenvatinib) phase 3 trials showed significantly improved progression-free survival. However, the considerable toxicities that are associated with these drugs may severely impact patients’ quality of life and ultimately become intolerable.

‘Our work identified the first known molecule to interact with the sodiumiodide symporter and modulate its function.’

Another strategy for the treatment of RR-DTC is to restore radioiodine uptake in order to enable effective radioiodine treatment. This has highlighted a need to understand exactly how radioiodine uptake is regulated and how it is repressed in RR-DTC. Since the cloning of the sodium-iodide symporter (NIS) gene in 1996, we have known that this large transmembrane glycoprotein mediates radioiodine uptake. Its key regulator is thyroid-stimulating hormone (TSH), which induces both NIS expression and protein function, the latter by promoting membrane localisation. TSH levels are therefore boosted prior to radioiodine administration to enhance NIS function, either through induction of hypothyroidism following thyroid hormone withdrawal or by giving recombinant TSH. However, this is not effective in RR-DTC.

The driver mutation of the tumour plays a role in the loss of radioiodine uptake in RR-DTC, with mutated genes within the MAPK pathway (e.g. RET fusion, RAS) clearly associated with reduced uptake. In particular, the BRAFV600E mutation, found in ~60% of papillary thyroid cancers (PTC), is commonly found in RR-DTC and is known to inhibit the expression of iodide-metabolising genes including NIS. It is also linked with reduced NIS membrane localisation.

Consequently, in preclinical studies, MAPK pathway inhibitors have been effective in stimulating NIS expression and radioiodine uptake. This has led to a phase 2 clinical trial determining the effect of a MEK inhibitor, selumetinib, prior to radioiodine uptake in metastatic RR-DTC. Increased tumoural radioiodine uptake was seen in 60% of patients; in those with sufficient uptake for an ablative dose, tumour size was reduced and either a partial response or stable disease was observed. This study is certainly encouraging for the strategy of radioiodine uptake restoration, and a multicentre trial (SEL-I-METRY) is now underway in the UK to evaluate the use of selumetinib in RR-DTC.

‘The driver mutation of the tumour plays a role in the loss of radioiodine uptake, with mutated genes within the MAPK pathway clearly associated with reduced uptake.’

Although BRAFV600E mutant tumours tended to respond poorly to preradioiodine selumetinib treatment, a similar trial in patients with BRAFV600E mutations suggested that dabrafenib (a specific BRAFV600E inhibitor) may be beneficial. More recently, the MEK inhibitor CKI, which sustains ERK inhibition, was found to be far better at restoring radioiodine uptake than selumetinib, which has a transient effect, although this is yet to be tested clinically.

Additional drug treatments are likely to be required for significant restoration of radioiodine uptake, particularly for BRAFV600E mutant tumours. Potential targets include TGFβ (transforming growth factor-β), which is induced by BRAFV600E and represses NIS through SMAD independently of the MAPK pathway. Recent data suggest this is mediated through reactive oxygen species (ROS) generated by NOX4, providing further possible targets. Other potential targets include the PI3K-AKT and NOTCH signalling pathways, as well as epigenetic alterations such as DNA hypermethylation and histone deacetylation. Redifferentiation using retinoids, PPAR-γ (peroxisome proliferator-activated receptor-γ) agonists and, more specifically, the modulation of miRNAs against key thyroid transcription factors such as PAX8 still warrant attention.

Correct targeting of NIS to the plasma membrane is essential for its function. Our work identified the first known molecule to interact with NIS and modulate its function. Pituitary tumour-transforming gene-binding factor (PBF) expression is upregulated in thyroid cancer and is induced by BRAFV600E. PBF binds NIS and induces its internalisation. This interaction is mediated by PBF phosphorylation at Y174; the loss of phosphorylation through mutation or inhibition of the kinase responsible, Src, abrogates NIS–PBF binding. Src kinase inhibitors potently repress PBF-pY174 and prevent PBF-mediated repression of NIS. They therefore have potential clinical utility in restoring radioiodine uptake, particularly in the BRAFV600E mutant tumours in which PBF is most highly expressed.

We are currently investigating two further novel interactors of NIS which modulate its function; ADP-ribosylation factor 4 (ARF4) and valosin-containing protein (VCP). ARF4 induces NIS function but is significantly downregulated in PTC. Conversely, VCP represses radioiodine uptake and is overexpressed in PTC. Both are under evaluation as potential targets for radioiodine restoration.

It is likely that a combination of drug treatments will be required for maximum restoration of radioiodine uptake in RR-DTC. The ultimate preradioiodine treatment also has the potential for multiple applications. For example, it may be used to treat radioiodine-avid DTC and allow significant reduction in overall dosage and number of treatments. It may also increase the effectiveness of ablation and/or similarly allow a reduction in dosage. 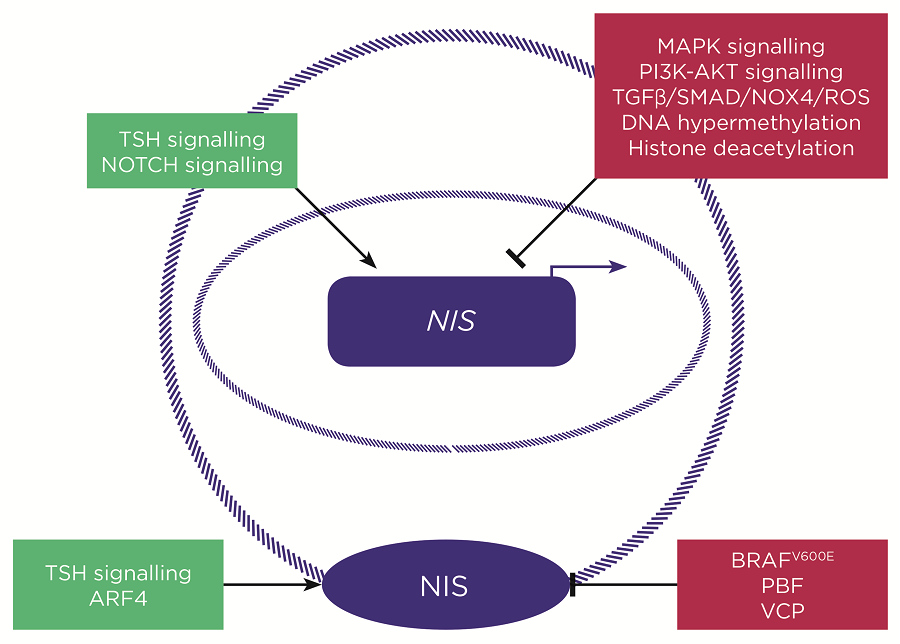 APPLICATION TO OTHER TISSUES

The application of radioiodine treatment in breast cancer remains a possibility, due to endogenous NIS expression within breast tumours. Although the signalling pathways that drive NIS expression are different to those in thyroid cancer and, for example, MEK inhibitors are not useful, the effects of the NIS interactors PBF, ARF4 and VCP on radioiodine uptake are consistent in breast cancer and may represent effective targets for enhancing the functionality of NIS within these tumours.

Finally, progress continues to be made in the targeted delivery of the NIS gene to multiple tumour types, including hepatocellular carcinoma and colon cancer, in order to facilitate radioiodine treatment. Modulation of these NIS interactors may therefore boost the efficacy of exogenous NIS delivery in multiple other tumours. Overall, the stimulation of radioiodine uptake via NIS has great clinical potential which continues to gather momentum.