Fat may be one of the most under-appreciated tissues in the body. It comprises lipid-laden mature adipocytes and precursor stem cells, along with other specialised cell types, all entwined in a network of extracellular matrix, blood vessels and nerves. Hence, adipose tissue is not the lump of inert blubber it may seem. Indeed, the critical roles adipose tissue plays in human health are still frequently overlooked. Instead, it can be disregarded as an irrelevance, a cosmetic imperfection or assumed to be ‘a bad thing’, when in fact it is (or should be) performing an array of remarkable and complex functions.

The importance of appropriately functioning adipose tissue is most clearly illustrated by rare individuals suffering from a generalised lack of fat, or lipodystrophy, which leads to multiple endocrine and metabolic problems.

Counterintuitively, the mechanisms underlying these problems are likely to be shared in obese individuals. This was probably first articulated by RD Lawrence as long ago as 1946.1 Describing a patient with lipodystrophy, fatty liver and diabetes, he noted that ‘No fat could be stored in the usual depots, and so it circulated in excess and produced lipaemia.’ He went on to discuss diabetes in obesity, hypothesising that this arises from ‘such an overfilling of the fat depots that they can no longer accept and absorb an excess of sugar from food.’ As such, he elegantly identified that the lack of available storage capacity is a mechanism by which a lack of fat development or the over-expansion of adipose tissue can cause similar health problems.

Hence the first, and almost certainly the most critical, job of adipose tissue is to act as a safe store for lipids. Losing this capacity leads to inappropriate lipid accumulation and dysfunction in other tissues.

Adipose tissue also provides a readily mobilised source of energy when required. This requires a complex co-ordinated response to endocrine and neuronal signals to precisely regulate nutrient uptake, processing, storage, breakdown and release.2 The typical white adipocyte can measure over 0.1mm in diameter. Occupying at least 90% of its volume is a single, huge droplet of lipid. Everything else this cell must do is achieved in a thin, surrounding ‘skin’ of cytoplasm. Given the range of its abilities this is a remarkable feat.

One of the other key roles of the adipocyte is to secrete local and systemically acting endocrine factors.3 Probably best known of these are the centrally acting satiety factor leptin, and the protein adiponectin, whose levels are closely correlated with insulin sensitivity. However, many others have been described with a bewildering array of effects, some beneficial and others harmful to the metabolic health of the individual. In addition to these roles, adipose tissue can act as a mechanical barrier against injury and provide insulation from the cold. 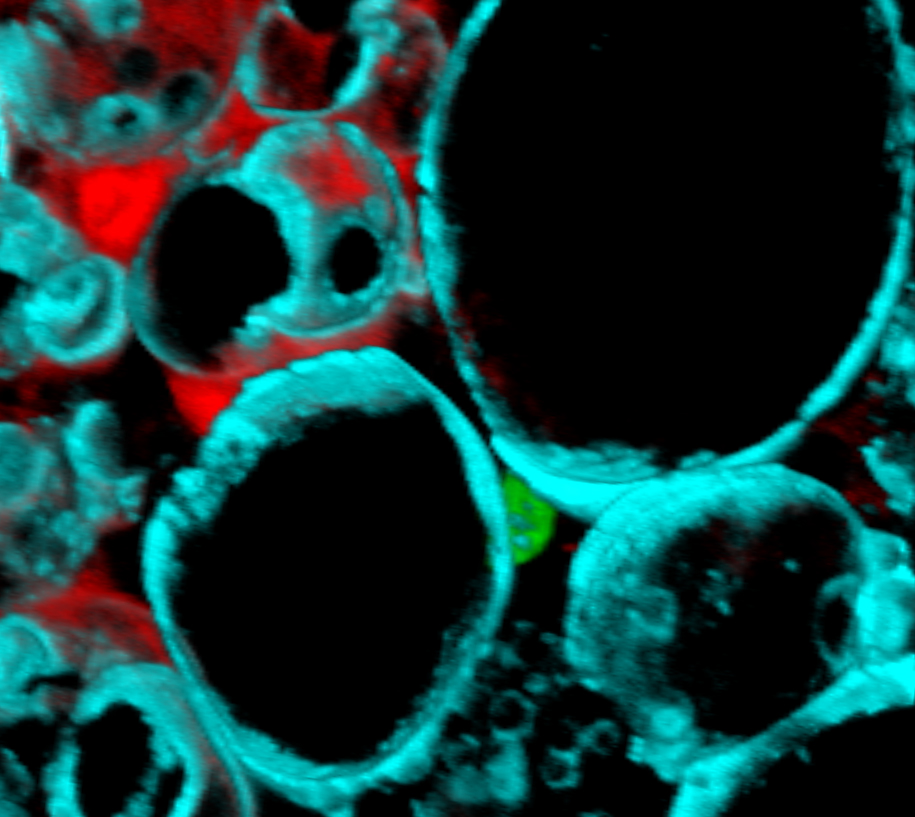 3D rendering of a 100-µm thick section of murine adipose tissue in the kidney. Immunoﬂuorescent staining for the lipid droplet protein perilipin is in cyan. A lineage tracing Cre-induced tdTomato ﬂuorescent protein labels a subset of adipocytes red. In the centre, the nucleus of a resident adipose stem cell is labelled green. ©J. Rochford

Where fat accumulates in the body can have significantly different effects on health. Subcutaneous white adipose tissue is generally beneficial, whilst expansion of visceral white adipose tissue in obesity is strongly correlated with metabolic disease. However, this broad statement hides the fact that different adipose depots are highly specialised and varied in function.

For example, unlike other fat, bone marrow adipose tissue increases during calorie restriction.4 Indeed, bone marrow fat can be subdivided into at least two anatomically and functionally distinct types. Several depots of thermogenic brown adipose tissue exist, as well as cells that share some features of both white and brown adipocytes (so called brite or beige adipocytes). Their presence in adult humans has led to intense interest in harnessing their ability to ‘burn’ stored lipids then dissipate the energy, as an anti-obesity therapy.5 Overall, targeting the development or function of defined adipose types could favour metabolically healthy fat tissue, with the potential to significantly improve health in obesity.

‘The first, and almost certainly the most critical, job of adipose tissue is to act as a safe store for lipids.’

As well as systemic effects, adipose tissues may also more specifically influence closely associated tissues. Perivascular adipose tissue can locally affect vascular function. Adipose tissue in the joints plays key roles in their maintenance, with changes in its function contributing to joint disorders such as osteoarthritis. Small depots of adipocytes exist within or adjacent to the heart, kidney, eyes and elsewhere. Teasing apart what each one does in its specific location is likely to reveal new insights regarding adipocyte function that have been missed by more generic analyses of well-studied adipose depots.

The adipocytes that comprise different depots can develop from several distinct populations of stem cells, whose nature can dictate the overall function of the tissues they generate.6 Understanding their identity and potential has importance beyond the function of fat, as stem cells isolated from adipose tissue have been used therapeutically to generate a variety of cell types.

Such is the complexity of the origins and functions of adipocytes between and within different depots. Some are dedicated to long term storage, some provide an on-site fuel source, whilst others are releasing endocrine signals or generating heat. The range of abilities is remarkable. Not bad for the humble fat cell.

Top
Brown (and brown-like) adipocytes: their role and potential