Why are our bones full of fat? The secrets of bone marrow adipose tissue

Stop and think about your bones: what images come to mind? Perhaps a skull with grinning jaws, or the strong white limbs stretching out towards your fingers and toes. You might even think of the bone marrow within them, producing the blood that courses through your veins. But this is not the whole picture, for your skeleton hides a secret: it is full of fat, and no one knows why.

This unsolved mystery is surprising. Scientists first noticed that our bone marrow contains fat-storing cells, called adipocytes, over a century ago.1 Having adipocytes in our bones might strike you as unusual, but it is not: in mammals, bone marrow adipose tissue (MAT) develops steadily after birth and accumulates rapidly during puberty such that, by the time we reach adulthood, it can comprise up to 70% of bone marrow volume – this represents over 8% of total fat mass!2

MAT is not distributed uniformly around the skeleton, but instead predominates in the arms and legs. This peripheral MAT develops early after birth and is rarely depleted, and thus has been termed ‘constitutive MAT’ (cMAT).3 In contrast, more central sites, such as the spine, pelvis and sternum, as well as more proximal regions of the long bones, contain less MAT and more haematopoietic red marrow (see Figure). At these sites, marrow adipocytes are more diffuse and tend to increase or decrease in response to environmental or pathological factors; hence, this depot has been dubbed ‘regulated MAT’ (rMAT).3

Other properties of marrow adipocytes also vary across these skeletal sites, with potential implications for the impact of MAT on health and disease.2,3 Indeed, MAT further increases with ageing and in diverse clinical conditions, including skeletal, metabolic and haematological diseases (Figure). Consequently, MAT is now attracting considerable interest as a potential player in the development of numerous diseases. However, unlike white and brown adipose tissues (WAT and BAT respectively), the study of MAT has been relatively limited. Consequently, the physiological and pathological functions of MAT remain poorly understood.4 So, what is the function of MAT, and how might it affect human health? 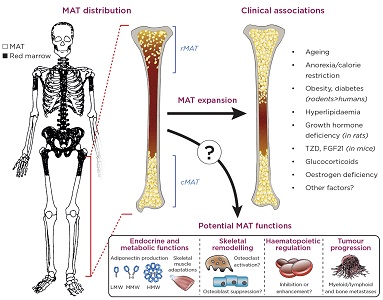 BAD TO THE BONE?

Increased bone marrow adiposity (BMA) is associated with lower bone mineral density and increased skeletal fragility, for example in osteoporosis, ageing and oestrogen deficiency.5 This has motivated research into how MAT has an impact upon skeletal integrity.

One possibility is that bone marrow adipocytes share the same skeletal stem cell precursor as bone-forming osteoblasts, in which case MAT accumulation might occur at the expense of osteoblast development.6 However, whilst this is true during embryonic development, it isn’t firmly established if this common precursor persists through to adulthood to contribute to postnatal tissue maintenance.

Another possibility is that bone marrow adipocytes secrete local factors that directly impair bone formation and/or stimulate bone resorption, thereby increasing fracture risk.7 Intriguingly, such paracrine actions might also promote the growth of tumours within the bone, whether primary myeloid/lymphoid cancers, or metastases from elsewhere (Figure).8,9

Is MAT accumulation therefore bad for bone health? Unfortunately, it is too early to tell. Although increased MAT may be associated with elevated fracture risk, increased MAT is not always associated with bone loss. The potential impact of MAT on skeletal tumour development also remains to be fully understood. Given the public health challenges posed by osteoporosis, skeletal cancers and ageing-associated diseases, elucidating these functions of MAT is a major goal of ongoing research.

The key function of bone marrow is in blood cell production, so it is unsurprising that many of the earliest studies of MAT were pursued from a haematological perspective. Generally, decreased BMA is associated with increased haematopoiesis,10 suggesting a suppressive effect of MAT.

However, not all data support a negative effect on haematopoiesis. Indeed, recent research suggests that, in the context of bone marrow transplants, marrow adipocytes secrete a molecule called stem cell factor, through which they promote haematopoiesis and the regeneration of haematopoietic stem cells.12 Thus, as for the putative effects of MAT on bone, its impact on haematopoiesis is proving to be more complex than first suspected (Figure).

BEYOND THE BONE: METABOLIC AND ENDOCRINE FUNCTIONS

Although MAT’s functions within the bone and marrow remain to be conclusively established, it seems clear that marrow adipocytes can influence skeletal homeostasis and haematopoiesis by secreting locally acting factors. But does MAT, like WAT, also secrete endocrine products to exert systemic metabolic effects?

Recent studies from our labs and others support this possibility. Numerous reports show that bone marrow adipocytes produce leptin, the prototypical adipocyte-derived hormone that has a major influence over energy homeostasis, inflammation and reproductive function.7 We have found that, as in WAT, leptin expression in MAT is suppressed in response to decreased caloric intake,13 demonstrating that MAT and WAT share common mechanisms to regulate their endocrine functions.

Whether MAT contributes to circulating leptin remains unknown, but its function as a source of other endocrine factors is becoming clear. A major focus of our research has been on MAT as a source of adiponectin, the other major hormone produced by adipose tissue. Despite this adipose source, circulating adiponectin is decreased in obesity and increased in states of leanness, such as during caloric restriction. Even after 20 years of extensive research on adiponectin, the basis for this so-called ‘adiponectin paradox’ had remained incompletely understood; why would an adipose-derived hormone be increased when WAT is lacking?

It was through this lens that we began to view MAT in a new light. In stark contrast to WAT, MAT formation increases in starvation states, such as during caloric restriction in animals and in human patients with anorexia nervosa.14 Both MAT and circulating adiponectin are also increased in many other conditions, such as ageing, oestrogen deficiency and following treatment with glucocorticoids or anti-diabetic drugs (Figure).4 But are these mere coincidences, or does MAT actually contribute to circulating adiponectin?

To answer this question, we combined clinical observations with studies in a unique mouse model that resists MAT formation. These approaches revealed that, during caloric restriction, MAT expansion is required for the full increases in circulating adiponectin,15 a conclusion since supported by our more recent research.4,13 MAT expansion during caloric restriction also appears to influence metabolic adaptations within skeletal muscle.15 It is unclear if this is via adiponectin or other endocrine factors, but it underscores the potential of MAT to exert systemic effects.

Over the past decade, the burgeoning field of MAT research has hugely advanced our understanding of MAT formation and function. MAT is no longer considered an inert ‘space filler’ within the bone marrow, but an active tissue with diverse implications for skeletal remodelling, tumour progression, haematopoietic regulation, and systemic endocrine and metabolic functions. Nevertheless, the study of MAT still falls far behind that of WAT and BAT, and therefore many key questions remain to be firmly answered.

Thankfully, a broad scientific community is now coalescing around MAT research. The first international meeting on BMA was held in Lille, France, in 2015, with successful follow-up meetings in 2016 and 2017. At the 2017 BMA meeting in Lausanne, Switzerland, attendees voted to establish the International Bone Marrow Adiposity Society, which aims to advance knowledge of BMA (www.bma-society.org). These developments highlight the increasing interest and enthusiasm for study of MAT. Therefore, we can be confident that future research efforts will continue to unlock fundamental knowledge of MAT biology, both as an endocrine organ and beyond.