The winner of the 2018 award is Janet Lewis of the University Hospital of Wales (UHW), Cardiff. Here, Janet tells us about her campaigning to improve care and reduce inequalities for patients with neuroendocrine tumours (NETs) in Wales.

‘Part of my endocrine specialist nursing role at UHW involves the care of patients with NETs. Our service for these patients developed quickly, and I began to see large numbers of metastatic gastrointestinal/bronchial and genetic NETs in my nurse-led clinic. It became apparent that patients were receiving inadequate and disjointed care, due to the location in which they lived. Those living in North Wales had access to a centre of excellence in Liverpool, but patients who lived outside the Cardiff area had to wait 6 weeks for a referral to our centre.

While the incidence and prevalence of NETs are low in comparison with other cancers, their effect and impact on patients and families are devastating. Most clinicians and surgeons may never come across NET patients in their career. Many patients received limited support from cancer charities, which lacked the knowledge and skills to guide the patient through their cancer journey. This left patients feeling isolated and lonely. 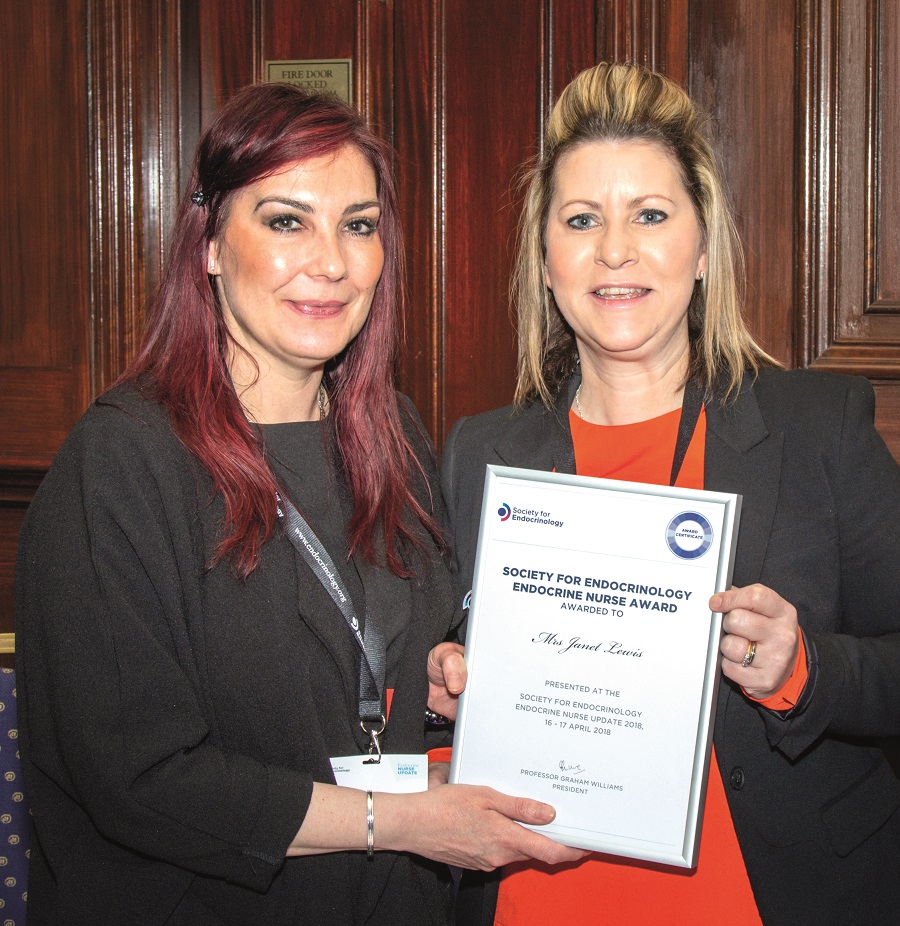 Witnessing the injustice of the “postcode lottery”, I felt compelled to raise awareness of NETs. I established a support group in Cardiff , with the help of Cathy Bouvier, Director of NET Patient Foundation, and some patients. Now our support group has 50–60 members. It has been a tremendous help to our patients by sharing experiences, as well as by offering support and education to individuals and their relatives.

The patients and I began to question why people with NETs were not recognised and treated in the same way as patients with other types of cancer, who have routine access to services, including a designated clinical nurse specialist (CNS). We researched the Welsh Cancer Delivery Plan, amongst other documents. This stated that all patients with cancer should have equal access to treatment, regardless of where they lived in Wales, with access to a CNS, of which the NET patients had neither.

This inspired us to network with other cancer charities and third-party sectors. We invited ourselves to cancer conferences and focus groups, to raise awareness of NETs. We sent patient stories to Welsh Assembly Members (AMs), Chief Executives of seven Health Boards and the Welsh Minister. We held an awareness event in the National Assembly for Wales on World NET day 2013, where Sally Jenkins (a NET patient) and Professor Steve Davies (consultant endocrinologist) presented a comprehensive case to the AMs. This was highly successful and we were invited to participate in the inquiry into implementation of the Welsh Government’s Cancer Delivery Plan.

‘Witnessing the injustice of the “postcode lottery”, I felt compelled to raise awareness of NETs.’

Through the strong support of the AMs who sat on the Committee of the Welsh Cancer Plan, the Health Minister agreed that NET services in Wales should be examined urgently. He instructed the Welsh Health Specialised Services Committee (WHSCC) to create a task and finish group, which included the Director of the NET Patient Foundation, patients, consultants and myself. The cancer planners and commissioners of the WHSCC were highly professional, very caring and understanding. They collated important statistics and information and as a group, we all worked in partnership, which led to a highly successful outcome. WHSCC agreed to commission NET services in Wales and funds were released centrally to develop the service.

The implementation of these recommendations is still in its early development, but patients now have access to the new NET service in Cardiff and NET centres of excellence in Liverpool and London, which provide pioneering treatments and PET gallium scans not currently available in Wales. Two designated NET CNSs have also been recruited to support patients.

This powerful partnership between patients and nurses has had a significant impact on patient care. The overall effect of these recommendations has been the commissioning of new services, leading to an improvement in the standard and equity of care for NET patients in Wales.'

Applications are open for the 2019 Endocrine Nurse Award until 29 June 2018. See www.endocrinology.org/grants-and-awards.