The end of 'stress' as we know it

I have borrowed the title of this article from a book I wrote with Elizabeth Norton Lasley in 2002.1 The purpose of this article, like the book, is to redirect thinking away from the rather broad and ambiguous meaning of ‘stress’ as a concept and a word. Instead, the aim is to focus on the biological impact, both good and bad, of experiences throughout the life course, whether or not we call them ‘stressful’. Hormones play a key role in what happens, acting on both the brain and the rest of the body.2

‘Stress’ is everywhere in our daily experiences and conversations and yet, except for describing the ‘fight or flight’ response, most people do not understand what is going on in the brain and body.

We become anxious when hearing about violence, chaos and discord. The pace of our daily lives, and the demands upon us and our children, often lead us to feel that there is too much to do in so little time! This disrupts our natural biological rhythms and encourages unhealthy behaviours, such as eating too much of the wrong things and neglecting exercise and good sleep. The result is in an unhealthy lifestyle.

Poverty and racial and ethnic discrimination, and a lack of educational opportunities and economic advancement, take their toll. Adverse experiences in infancy and childhood, including poverty, leave a lifelong imprint on the brain and body. This undermines long term health, increasing the incidence of cardiovascular disease, diabetes, depression, substance abuse, anti-social behaviour and dementia.3

How does all of this stress ‘get under our skin’? What does it do to our brains and our bodies, how does it do it, and what can we do about it? 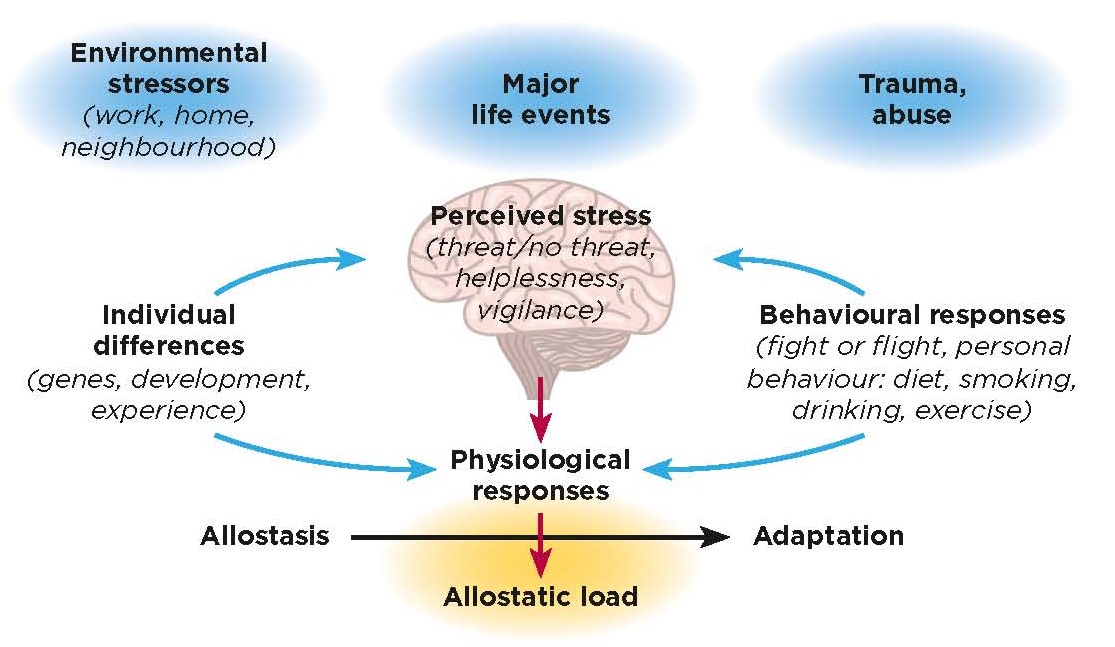 Figure 1. The brain is the central organ that perceives and responds to events that are potential threats and directs both physiological and behavioural responses. Hormones play a key role and signal back to the brain to affect behaviour and brain architecture. ©McEwen BS 1998 New England Journal of Medicine 338 171–179; Brain ©Shutterstock

For starters, ‘good stress’ involves our taking a chance on something we want, such as interviewing for a job or school, or giving a talk before strangers, and feeling rewarded when we are successful. ‘Tolerable stress’ means that something bad happens, for instance failing to get that job or position in school, losing a job or experiencing the death of a loved one, but where one has the personal resources and support systems to weather the storm.

‘Toxic stress’ means that something bad is going on but in circumstances where one does not have the personal resources or support systems, resulting in a lack of control. As a result, over time, one may suffer mental and physical health problems, particularly if the situation is not resolved. This occurs through a gradual process called ‘allostatic load and overload’.

‘Homeostasis’ means the physiological state which the body maintains to keep us alive: that is body temperature and pH within a narrow range and an adequate oxygen supply. In order to maintain homeostasis, the body activates via ‘allostasis’ the release of mediators like cortisol, adrenaline, the immune system, the autonomic nervous system, metabolism and neurochemical systems in the brain to promote adaptation (Figure 1). This occurs, for example, when we get out of bed in the morning, walk up a flight of stairs, are surprised by something unexpected, get into an argument, or run to catch a train.

We may only refer to some of these experiences as ‘stressful’ and thus the word does not really recognise all of the underlying biology. The mediators help us adapt as long as they are turned on in an orchestrated and balanced manner and turned off efficiently when not needed. ‘Allostatic load’ is when this happens over weeks and months and produces, for example, an accumulation of abdominal fat or hypertension, i.e. an ‘allostatic state’. ‘Allostatic overload’ refers to what occurs in toxic stress and may lead to disease, e.g. coronary artery blockade or diabetes or depression. 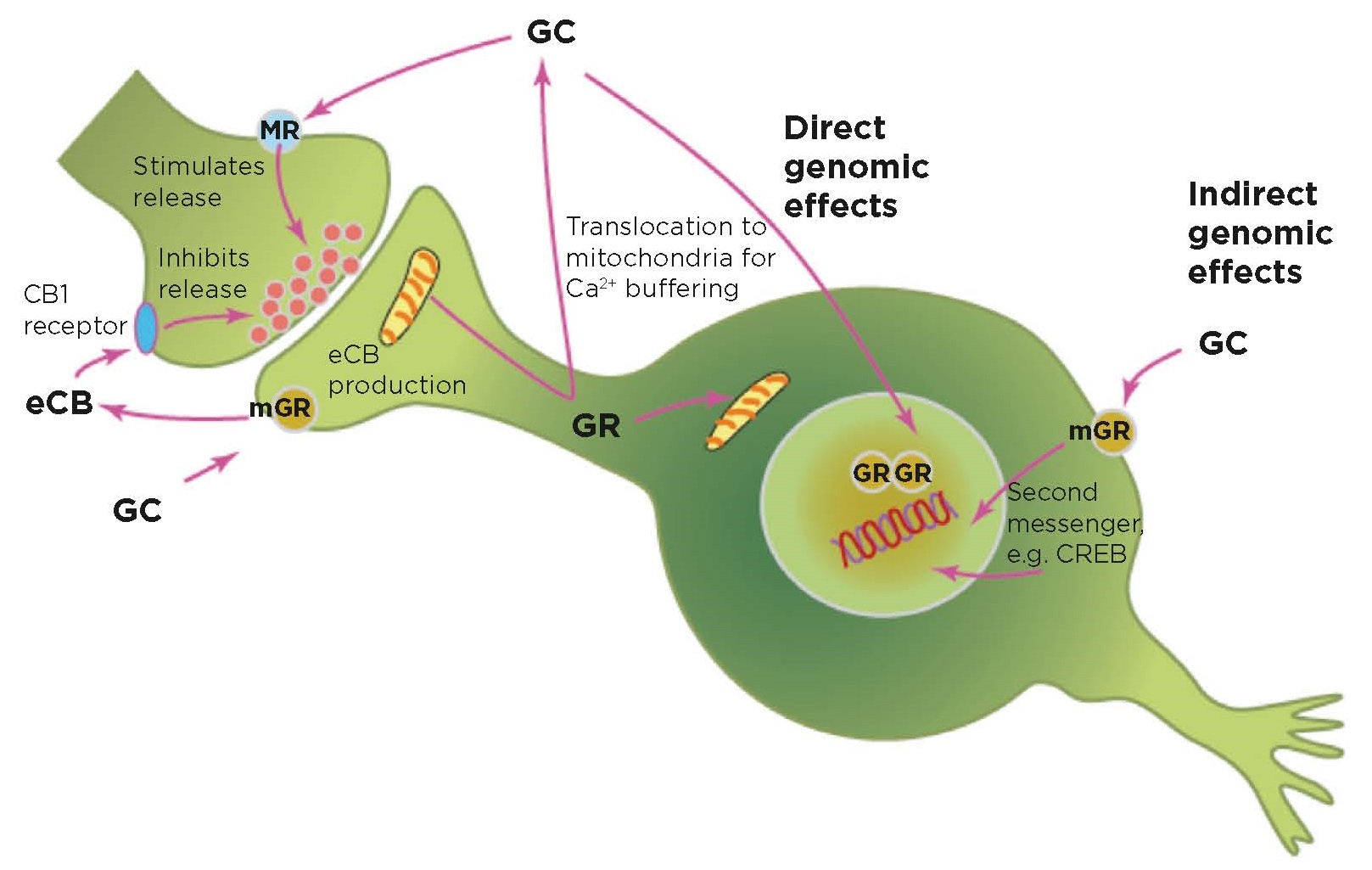 Figure 2. Glucocorticoids (GC) have multiple roles and mechanisms of action besides direct and indirect genomic regulation. These include mediating direct release of the neurotransmitter glutamate, activation of endocannabinoid (eCB) secretion that feeds back on presynaptic glutamate and GABA (γ-aminobutyric acid) release, and actions on mitochondria. ©BS McEwen

Because cortisol is well known in relation to stress, we often hear that measuring our cortisol levels will tell us if we are ‘stressed’. But this is not so simple.

First, a single measure of cortisol will tell us nothing, since cortisol levels go up and down within minutes. Rather, multiple samples over time, urinary cortisol collection or hair cortisol can be used to assess excess or insufficient cortisol secretion.

Secondly, cortisol helps us adapt, working along with the other mediators of allostasis. Cortisol co-ordinates metabolism with daily activity and sleep patterns.4 Diurnal fluctuations of cortisol promote the formation and elimination of synapses in the brain and this helps us learn and adapt.5,6 Furthermore, the diurnal early morning rise of cortisol, as well as a stress response, activates adaptive immune function and sends immune cells ‘to their battle stations’ to fight an infection or repair a wound.7,8 However, too much cortisol also causes problems, as do a flat diurnal rhythm and Cushing’s disease, when excess cortisol is stimulated by a pituitary gland tumour!

Thirdly, glucocorticoids do not play the same role across the life course, but rather serve different functions. This starts with their role in ‘wakening’ of the amygdala in neonatal life9 to their role in promoting ponderal growth in adolescence10 and their influence on the vulnerability of the adolescent brain to stressful experiences11‒13 as well as the age-accelerating role of excess cortisol.14,15 Cortisol affects multiple functions via non-genomic and genomic mechanisms (Figure 2).

Family conflict, neighbourhood chaos, the demands of a job, shift work and jet lag or living in an ugly, noisy and polluted environment all contribute to allostatic load/overload through the same biological ‘mediators’ that promote adaptation ‒ and they shape our brains as well!

CENTRAL ROLE OF THE BRAIN 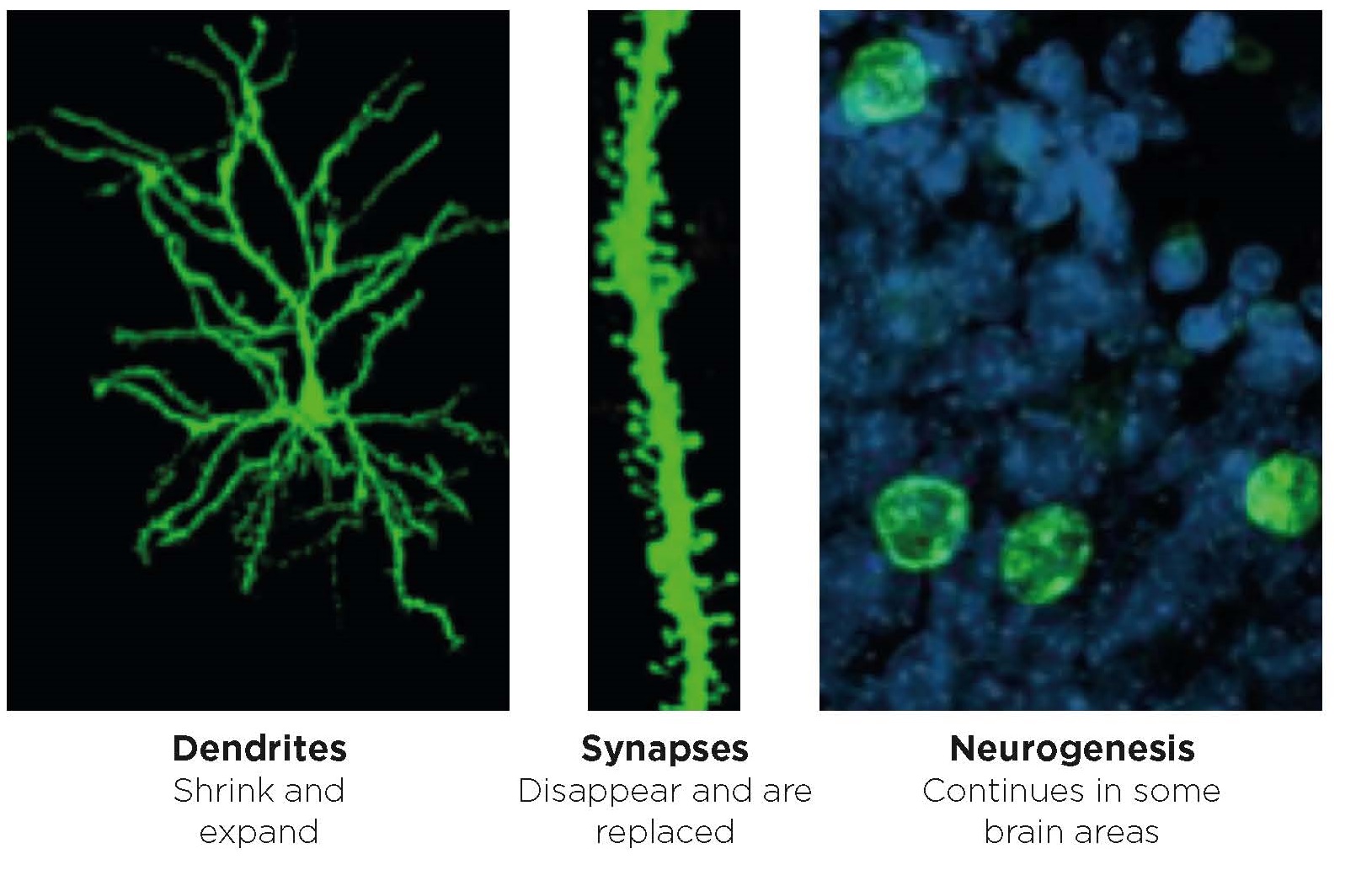 Figure 3. Hormones are involved in regulating brain architecture that includes remodelling of dendrites, turnover of synapses and neurogenesis in the adult as well as in the developing brain. ©E Gould, Princeton University

The brain ‘keeps the score’ by storing memories from bad as well as good experiences and promotes the ‘wisdom of the body’ by choices it makes, such as adopting health-promoting behaviours.18 Indeed, the brain is a plastic and vulnerable organ of the body, and is continually sculpted by experiences (Figure 3).

Discovery of adrenal steroid receptors in the hippocampus led the way and became the ‘gateway’ for other discoveries regarding brain‒body interactions.2 Cellular and molecular mechanisms for this plasticity have emerged and have revealed mechanisms of steroid hormone action other than direct genomic stimulation. These include actions on mitochondria as well as regulation of cellular signalling pathways.19,20

Besides steroid hormones, metabolic hormones enter and affect the brain and their relationship to brain metabolism, and mitochondrial function has become important for understanding disorders like diabetes, depression and dementia.21 Another important hormone discovery has been the widespread effect of sex hormones throughout the brain, along with diverse mechanisms for sex hormone action at both genomic and non-genomic levels, including actions in mitochondria.22,23 This has helped highlight the need to understand sex differences in normal brain function and disease and in relation to stress and allostatic load.

Finally, hormone actions via epigenetic mechanisms operating over the life course are changing the way we look at the development of disorders and the possibilities for intervention.24,25

WHAT DOES THIS MEAN FOR INTERVENTIONS?

Discovery of hormone receptors and actions throughout the brain2 has led to the discovery of its capacity for allostatic adaptive structural and functional plasticity, mediated in part by hormones. This has helped to facilitate the emergence of practical aspects of the science of ‘epigenetics’ by revealing effects of the social and physical environment on adult as well as developing brain structure and function. Gene expression studies show that, although ‘reversal’ is not possible, redirection of brain function and behaviour is possible via the capacity for plasticity as the life course unfolds.26

Early life adversity, along with preconception and prenatal events, has disproportionately strong and lasting effects on cognitive, mental and physical health. While prevention is key, the epigenetic view shows that there are on-going possibilities for amelioration via behavioural interventions. These involve increased physical activity, social support, mindfulness and mediation, and are being shown to change brain structure and function as well as to benefit systemic physiology.27‒29