Welcome to Starling House: the Society’s new home celebrates the birth of endocrinology

In honour of Ernest Starling’s pivotal contributions to the field of endocrinology, the Society for Endocrinology’s new home has been named Starling House. At our recent opening ceremony, Karen Chapman (the Society’s former General Secretary) entertained us with the story of Ernest Starling’s remarkable career and life, highlighting why he deserved to have his achievements celebrated in this way.

Ernest Starling was the first person to use the term ‘hormone’ in public. Together with William Bayliss, he demonstrated the chemical nature of a messenger (secretin) released from intestinal cells that travelled in the blood to ‘excite’ the pancreas and stimulate the secretion of digestive juices. At this time, almost nothing was known of the nature of hormones or chemical messengers, so this was the birth of endocrinology as a specialist field of medicine. However, it wasn’t until 1946, some 40 years after this discovery, that the Society for Endocrinology was founded.

Here, we look back at Starling’s incredible journey and life, so vital to the establishment of the field of endocrinology. 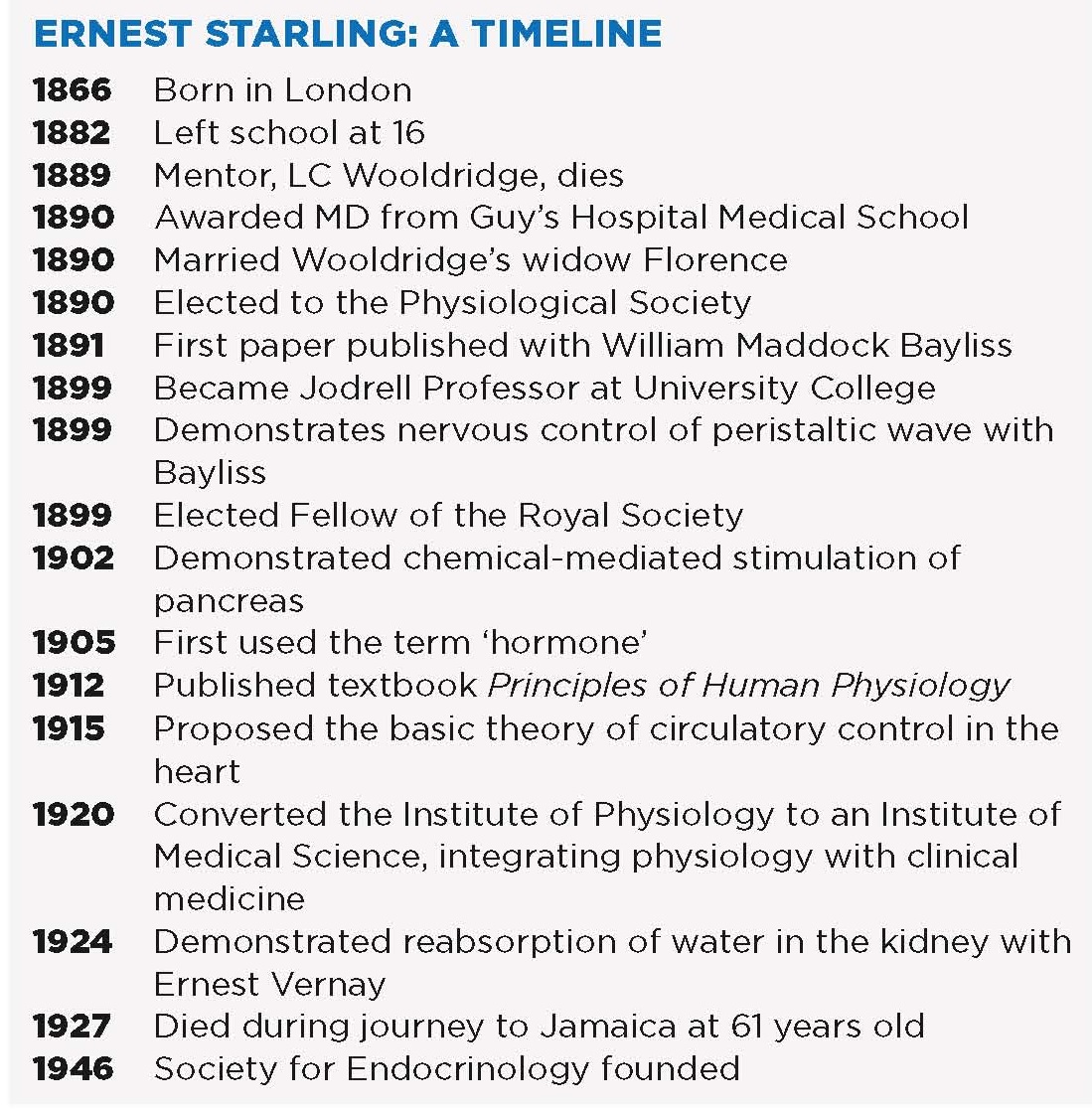 Starling was born and educated in London. He left school at 16 to undertake a scholarship at Guy’s Hospital Medical School. During this time, at the suggestion of his mentor, LC Wooldridge, he undertook vacation work with the physiologist Wilhelm Kuhne in Germany. This is where his interest in the digestive system started.

Just after Wooldridge’s death, Starling began a very successful collaboration with William Maddock Bayliss at University College, which led to them both being elected to the Physiological Society. This was a busy period in Starling’s personal life, and 2 years after Wooldridge’s death, Starling married his widow. This would have been of great financial benefit, since Starling’s family didn’t have much money and Florence was well provided for by Wooldridge. Bayliss later married Starling’s sister, so becoming his brother-in-law.

In 1899, Starling became the Jodrell Professor at University College, and was paid the handsome salary of £264 per annum and elected a Fellow of the Royal Society.

THE BIRTH OF ENDOCRINOLOGY

In 1899, Bayliss and Starling demonstrated the nervous control of the peristaltic wave that moves food through the intestine. However, it wasn’t until 1902 that Bayliss and Starling carried out their key experiment showing that the application of acid to the duodenum could stimulate pancreatic secretion. This was the crucial research that showed a chemical messenger, and not a nervous one, had to be responsible.

This was quite a revolutionary concept in 1902, where the accepted doctrine, supported by Pavlov, was that the nervous system mediated communication between organs. Even when their work was published, Pavlov maintained his assertion the nervous system was responsible, until one of his own colleagues repeated the experiment.

Three years later, Starling first used the term ‘hormone’ during the Croonian Lectures at the Royal College of Physicians in London. He used the Greek verb ‘ormao’ (to arouse or excite) to derive the name hormone. It seems that the adoption of this term arose from a dinner party conversation with colleagues William Hardy (a biologist) and WT Vesey, a classicist. During the lectures, Starling also outlined his concept of what this new field of endocrinology might become, citing contemporary research on adrenaline and touching on the roles of insulin, gastrin and the sex hormones.

Interestingly, the term ‘endocrine’ had been suggested to describe islet cell secretions 20 years earlier, but it was only after Starling’s lectures that it became widely accepted as a general term to describe hormone action.

WORK ACROSS MANY FIELDS

Starling’s collaboration with Bayliss lasted approximately 16 years, with the work on secretin being the final phase. Starling’s discoveries weren’t limited to hormones and the digestive system. He also made ground-breaking discoveries in fluid balance and circulation.

In 1915, he first proposed his ‘law of the heart’, which remains the basic theory of circulatory control today. With Ernest Vernay, he demonstrated the reabsorption of water by the tubules of the kidney, another substantial discovery with far-reaching implications. One reported interesting idiosyncrasy of Starling’s was that, before any experiment, he would religiously present a grain of rice to a replica of the Hindu god Shiva.

Starling made huge contributions to physiology and medical science. His textbook Principles of Human Physiology (the companion to Principles of General Physiology by Bayliss) was a standard international text for decades. In 1920, with a large bequest from the Rockefeller Foundation, he converted the Institute of Physiology into an Institute of Medical Science, integrating physiology with clinical medicine, a long-held ambition.

In the same year, he contracted malaria during a trip to India and, as he also suffered from heart and bowel problems, he was later advised to rest somewhere warm and sunny. In 1927, he journeyed to Jamaica alone but, when the boat arrived, he was found dead, presumably from heart failure. 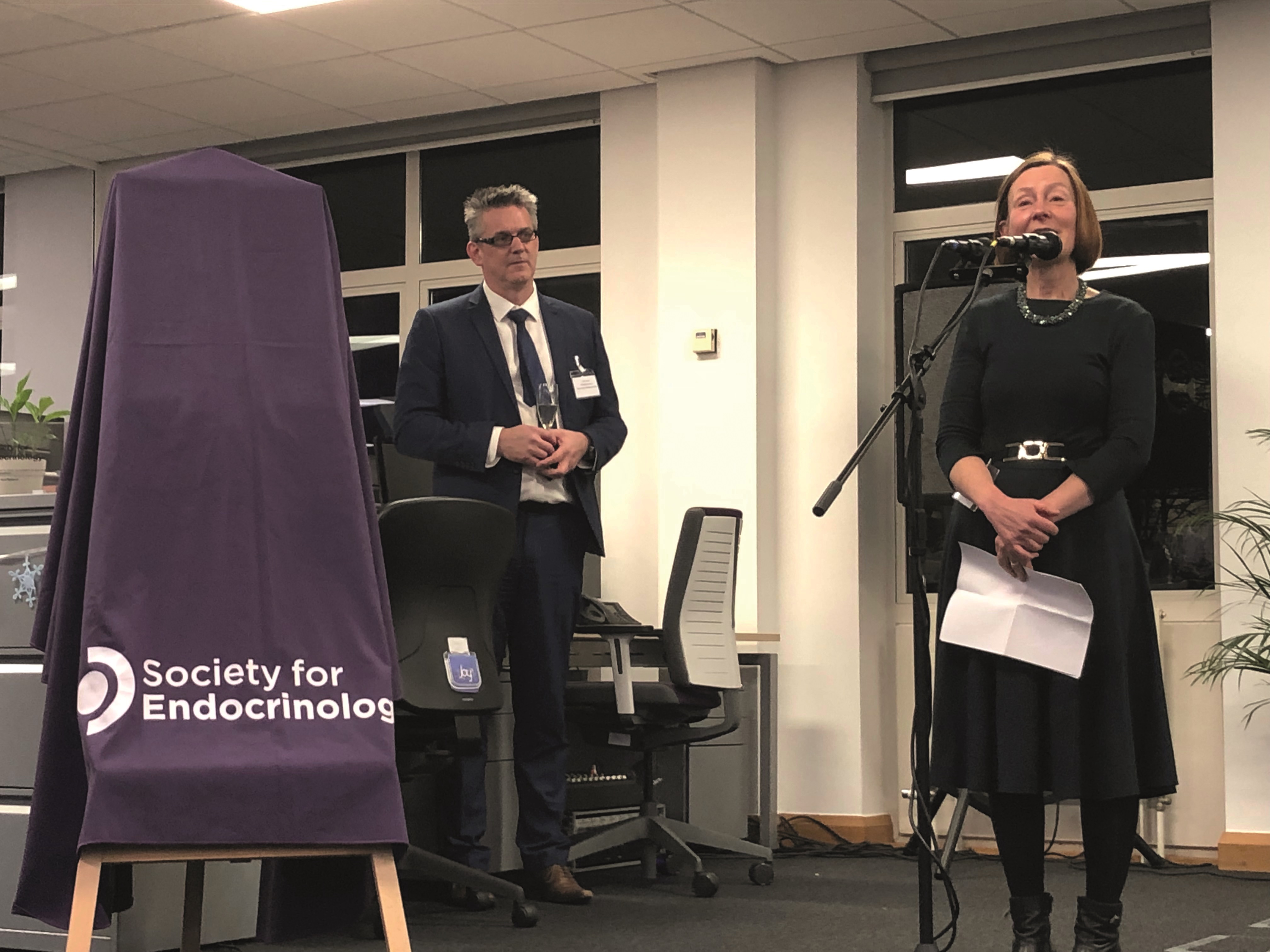 Ian Russell and Karen Chapman at the opening ceremony.

Starling was a great believer in the ability of scientific research to underpin advances in patient care. This relationship between academic researchers and healthcare professionals is what binds the Society for Endocrinology together, in the pursuit of a better understanding of the discipline and improved patient outcomes.

As we all know, the study of hormones has led to huge benefits for human health and society, such as the control of reproduction, as well as the treatment and prevention of a range of diseases, across all areas of physiology (as reflected by the Society’s seven Endocrine Networks).

Very fittingly, the Society’s Starling Medal was introduced in 2015 to recognise mid-career endocrinologists whose work has contributed to exceptional scientific advances in endocrinology. Ernest Starling is further recognised by the naming of the home of the Society for Endocrinology as Starling House.