Recent advances in genome editing are revolutionising the way we tackle big scientific questions. Tools have been developed that act like tiny ‘molecular scissors’, causing targeted genomic cuts in DNA. By exploiting cells’ innate DNA repair mechanisms, scientists can repair aberrant genes or modify the genetic code to their liking. With these tools, we can correct pathogenic mutations, model human genetic disease in cells and animal systems, modify key organisms for biotechnology and agriculture, and potentially eradicate hereditary monogenic disease.

A number of different methods exist to cause genomic cuts; however, repair mechanisms remain the same. DNA breaks can occur naturally through intracellular nucleases/reactive oxygen species or externally by ionising radiation/ultraviolet light. If left unrepaired, the damage will lead to cell death. Luckily, the cell has developed natural processes to fix breaks. Repair can follow one of two paths: non-homologous end joining (NHEJ) or homology-directed repair (HDR).1

NHEJ is a fast simple method, generally favoured when broken ends are compatible.2 Here, specific proteins guide the alignment of the broken ends, joining them together using DNA ligase IV.3 In the majority of cases, the correct ends rejoin. However, annealing incorrect ends or the removal of damaged nucleotides can lead to chromosomal aberrations and mutations.4 Hence, NHEJ is error prone, a characteristic researchers exploit to disrupt gene function. 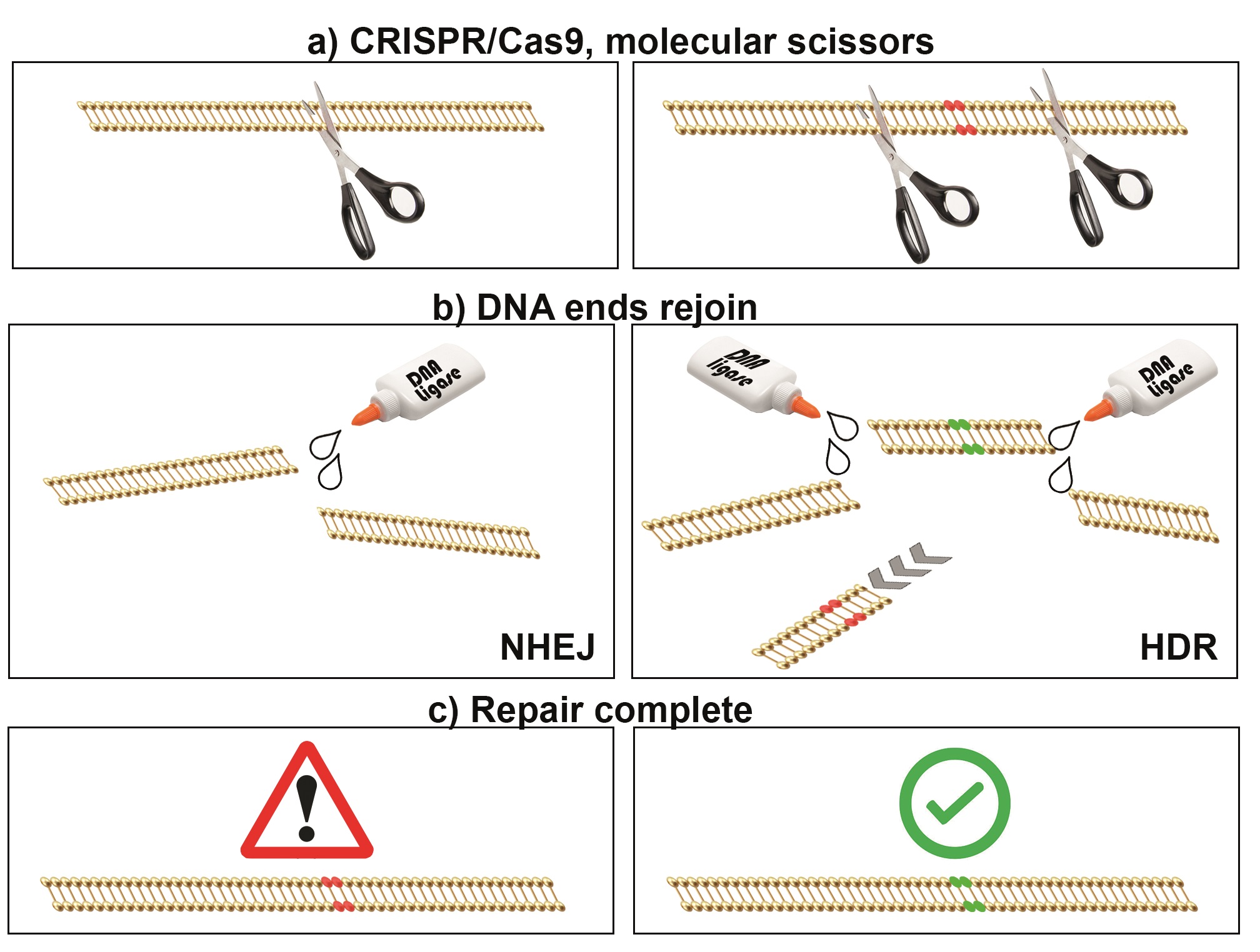 Coined as ‘the discovery of the century’, the two scientists attributed to its identification, Jennifer Doudna (Berkeley, CA, USA) and Emmanuelle Charpentier (Berlin, Germany),11 have been tipped to win a Nobel Prize for their work, along with Feng Zhang (Cambridge, MA, USA), a pioneer in the use of CRISPR/Cas9 on mammalian cells.12

First discovered as a bacterial adaptive immune response to foreign invading viral DNA,13 the system acts to incorporate specific portions of phage DNA into the CRISPR loci. This allows generation of homology-searching guide RNAs that bind with Cas9 endonuclease and target cuts in the viral DNA.13 Synthetic guide RNAs can be designed to incorporate user-defined target sequences, and synthesised in the laboratory. Therefore, the CRISPR/Cas9 system offers a versatile and adaptive tool for generating targeted genomic breaks.

A TOOLKIT TO TREAT DISEASE

CRISPR/Cas9 is a powerful tool and has been used to remove an erroneous exon from the dystrophin gene in mice with muscular dystrophy, resulting in restored muscle integrity and function.14–16 Furthermore, proof of principle experiments in human embryos (not destined for transplantation) used CRISPR/Cas9 and synthetic DNA template-mediated HDR to correct a mutation in MYBPC3, which normally causes sudden death syndrome.9 Despite the obvious ethical issues surrounding the misuse of genome editing to manipulate human genetics, there are serious concerns regarding inherited off-target effects that must be resolved before reaching the clinic.

Although genome editing continues to raise concerns for clinical use, it has provided immediate advances in modelling disease in animals. The zebrafish is one such organism that has benefited from improved genome editing techniques. Popular for its versatility as an in vivo model, the zebrafish provides rapid ex utero development, large numbers of embryos, ease of genetic and pharmaceutical manipulation, and over 82% disease-causing genes in common with humans.17 For many years, antisense morpholino (MO) technology has been used to knockdown gene function in zebrafish, by inhibiting gene-specific translation. However, MO use has come under scrutiny in recent years.18 Mutant zebrafish lines remain the ‘gold standard’, although generating them in the past required laborious large scale teratogen-based screens.19,20 Although many mutants have been recovered for a large number of genes, many more have been missed.

The targeted nature of CRISPR/Cas9 has meant that zebrafish mutations in genes known, or suspected, to be pathogenic can be easily disrupted as a consequence of error prone NHEJ.21 Although it is possible to create exact mutations that recapitulate patient variants by the addition of synthetic DNA templates for HDR, this is more challenging.22 However, the technology is constantly evolving; variations in endonuclease activity are being developed to improve specificity and efficiency.23

These are exciting times. Genome editing has become commonplace in most research laboratories and the possibilities for manipulating genomic DNA for scientific advances are endless.