Early Career Prize Lecturers 2018, Science: The importance of local steroid action in the regulation of fertility

The endometrium, the lining of the womb, is a classic endocrine target which undergoes recurring changes in response to the ovarian secretion of oestradiol and progesterone during each menstrual cycle. This promotes co-ordinated remodelling of the tissue, and is required to create an optimal environment for implantation of a blastocyst. These changes are essential for the establishment of pregnancy; their dysregulation is associated with infertility and disorders of pregnancy.

Establishment of pregnancy is dependent upon ‘fine-tuning’ of the endometrial microenvironment, which is mediated by differentiation (decidualisation) of human endometrial stromal fibroblasts (hESF).1 The post-ovulatory rise in progesterone acts as an endocrine signal to stimulate decidualisation of oestrogen-primed hESF. However, decidualisation occurs within spatially discrete regions of the tissue. This led us to speculate whether local steroid action may be required to regulate endometrial remodelling during the establishment of pregnancy.

The term ‘intracrine’ emerged as a new concept in endocrinology in the 1980s. It describes the ability of cells within non-gonadal tissues to both produce and respond to hormones, without significant release of active hormones into the peripheral circulation.2 This concept presented an analytical challenge, as measurement of serum hormones would not give an indication of the bioavailability of steroids within tissues subject to intracrine regulation.

'These studies suggest that metabolism and activation of steroids within the endometrium enables ‘fine-tuning’ of steroid hormone-dependent processes.'

Some insight could be gained from classic studies of metabolism in human endometrial tissues, using radiolabelled steroids which demonstrated a capacity for conversion of steroid precursors to active testosterone, dihydrotestosterone and oestradiol.3−7 More recently, liquid chromatography–tandem mass spectrometry methods allowed sensitive analysis of concentrations of steroids detected in serum and matched endometrial tissue samples. These studies revealed that tissue concentrations were distinct from those in serum, and that tissue homogenates had greater concentrations of dehydroepiandrosterone (DHEA) and less testosterone and oestradiol than corresponding serum samples.8,9

Although these studies suggested a capacity for local regulation of steroid availability within endometrial tissues, whether local action could regulate the processes required for the establishment of pregnancy was not known. Using a robust in vitro model of decidualisation, we demonstrated an important role for local steroid metabolism in regulating hESF function, something previously considered a solely endocrine-mediated process.10−14 The hESF were isolated from endometrial tissue biopsies, cultured in vitro and decidualised by incubation with progesterone and cyclic adenosine monophosphate. We conducted detailed time-course profiling of the steroidogenic capacity of hESF during decidualisation by assessing expression of steroid-metabolising enzymes by quantitative PCR, Western blotting and immunocytochemistry, as well as measuring steroid concentrations in cell culture supernatants.

We assessed expression of androgen biosynthetic enzymes and found that 3β-hydroxysteroid dehydrogenase, aldo-keto reductase family 1 member C3 and 5α-reductase were all expressed in decidualised hESF and that this was associated with a corresponding synthesis of androstenedione, testosterone and dihydrotestosterone.12 Notably, activation of androgens in decidualised hESF was time-dependent and both enzyme expression and androgen production were greatest within the first 4 days of an 8-day decidualisation time course.

To determine whether this local production of androgens represented intracrine regulation of hESF, we co-incubated cells with the androgen receptor antagonist flutamide. Consistent with time-dependent synthesis of androgens, flutamide had a significant impact on expression of decidualisation markers and inhibited their secretion by decidualised hESF by up to 80% within the first 4 days of the decidualisation time course. Blocking local androgen action also affected the trajectory of hESF differentiation and secretion of the key implantation marker osteopontin, which was reduced by 40% at the 8-day time point.

‘These findings represent a paradigm shift in our understanding of the importance of local sex steroid action in the endometrium during the establishment of pregnancy, highlighting new therapeutic targets for reproductive health and disease.’

These studies suggest that metabolism and activation of steroids within the endometrium enables ‘fine-tuning’ of steroid hormone-dependent processes. In light of this, we speculated that ‘inactive’ precursors, such as the adrenal steroid DHEA, could also play an important role in regulating endometrial function in women. Although concentrations of DHEA are unchanged across the menstrual cycle, they decline precipitously with age, and are half peak concentrations by the age of 40.15 At this point, the age-related decline in fertility is pronounced in women, and implantation rates in both natural and assisted reproduction are decreased.16

Our studies suggest that local activation of androgens and oestrogens is time-dependent and necessary for optimal spatial and temporal remodelling of the endometrial tissue microenvironment. We have also found that availability of circulating steroid precursors, which decline with age, affect intra-tissue steroid concentrations, and this may contribute to the age-related decline in fertility in women.

Collectively, these findings represent a paradigm shift in our understanding of the importance of local sex steroid action in the endometrium during the establishment of pregnancy, highlighting new therapeutic targets for reproductive health and disease.

The Society’s Early Career Prize Lectures help Clinicians-in-Training and Scientists-in-Training have their work recognised across the wider endocrine community. Successful applicants present a 20-minute lecture at the Society for Endocrinology BES conference each November and receive an honorarium of £750, as well as having an article published in The Endocrinologist.

To find out more see www.endocrinology.org/grants-and-awards/prizes-and-awards/early-career-prize-lectures. 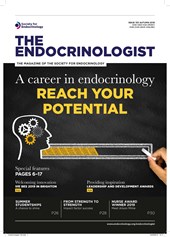