JULIA BUCKINGHAM: A LIFE IN ENDOCRINOLOGY 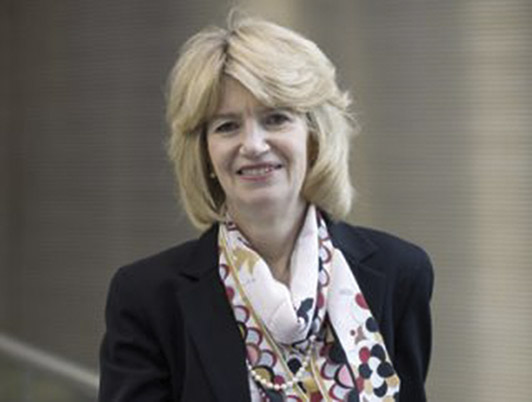 Julia Buckingham has supported the Society’s growth and development through many roles in her time as a member. Here, Kim Jonas asks her about the changes she has seen, and what they mean to her, to endocrinology and to us all.

KJ: We’re going to start with quite a tricky question. Which endocrinologist most inspired you?

JB: Geoffrey Harris, and his work in the late 1940s/early 1950s showing the neural control of the pituitary gland. When you think of the technology he had at his disposal, he made extraordinary discoveries. He inspired me to do endocrinology, and I still absolutely rate him as my number one. He was also an incredibly decent bloke who cared about people; he cared about his team, and he cared about endocrinology. I remember when I was an undergraduate, hearing him give a lecture, and I was just absolutely bowled over.

KJ: What do you most enjoy about your work?

JB: I love research, but, most of all, I love the people. You meet such amazingly interesting, exciting, creative people from all over the world. And, in a research career, you have huge opportunities. Being able to see fundamental science being translated into clinical practice is unbelievably rewarding.

During the pandemic, as someone who’s worked on steroids for most of my life, it was very satisfying to see dexamethasone finding yet another role. The vaccines have been fantastic, because that’s a reflection of the really hard slog in molecular biology over the last 25–30 years. We saw how it can be put to use – and put to use incredibly quickly.

I attended a conversation with Kate Bingham at the Royal Society of Medicine online a few weeks ago. At the end, Simon Wesley (the Chair) put up a Gantt chart of the time taken to discover vaccines. At the top was malaria, where the search apparently started in 1880! We have only just found something which will be really helpful; it’s in early clinical trials at the moment. And now we have the COVID vaccine, in less than a year, and already getting into people.

We need to think much more creatively about how we can get discoveries into patients – safely, of course, but in a much more efficient timescale. The way the regulators, Government and researchers have all worked together has been inspirational. We really need to learn from this. Hopefully that’s what Patrick Vallance’s new office will do.

We need to think much more creatively about how we can get discoveries into patients – safely, of course, but in a much more efficient timescale.

KJ: When you remove bottlenecks, and funding limits, it’s amazing what can be achieved … I know you must have seen an explosion in technological developments and scientific advances in your career. What words of wisdom do you have for aspiring endocrinologists?

KJ: What discoveries and achievements are you most proud of?

JB: I can’t answer that one! Well, of course, I’ve seen many of my students become hugely successful, and that has been very, very rewarding. I’ve always had fantastic teams; they’ve all been wonderful people. I’ve enjoyed working with them and I’m still friendly with a lot of them, which is nice.

KJ: When did you attend your first Society for Endocrinology conference?

JB: I vividly remember it. It was at the Middlesex Hospital, London, in November 1972. I gave my first communication. I can still remember how terrified I was: I didn’t sleep.

The Society meeting then was so small; we didn’t have parallel sessions. It was just one lecture theatre. Of course, there were the medal lectures, and the odd symposium, but that was all, in terms of big lectures. The rest of it was communications. There was a real expectation that PhD students and postdocs would give a communication. I look back on that, not just with immense affection, but also as fantastic training.

It was the place where you could meet colleagues from other places and, in a way, I think we’ve lost that. I think people networked, particularly young people, much, much more than they do now, because they didn’t go with a group. Groups were very small in those days. So, you went along with your supervisor, and possibly one or two other PhD students and postdocs, and you met other people. That’s where I developed my networks, which have stayed with me throughout my career. I thank the Society for that, because I don’t think it would have happened otherwise; it was a really, really important thing.

KJ: You can’t underestimate the importance of networking, can you? I think it’s something that the Society enabled for me too. We still had the November meeting in London when I joined. And that’s where I built up my network.

JB: I honestly agree. The other thing the Society gave us was the opportunity to go to meetings abroad, because of the funding. I certainly went to many meetings that I could not have gone to without the support of the Society. That enables you to create your international networks.

I went to many meetings that I could not have gone to without the support of the Society. That enables you to create your international networks.

KJ: What are your favourite experiences from working with the Society?

JB: When I was Treasurer, I was involved in developing Bioscientifica, which was tremendously interesting. That must have been the early 1990s. It’s sort of ironic, because (if I remember rightly) we were worried about open access publishing, and how it would impact the Society’s income. Our journals were going from strength to strength, and it was those journals that enabled us to have nice meetings and send our young people off to meetings overseas, and all those sorts of things. So Bioscientifica was set up really with the idea of creating another income stream for the Society. Of course, it’s grown and grown, and been very successful, so that’s a very happy memory. I’m pleased to feel I did just a little bit to contribute towards that.

It’s been exciting watching the team grow. It was quite inspirational to have the whole of the Bioscientifica team working alongside the people who were running the Society. It was lovely to see how they each understood the value of one another’s contribution to the Society’s overarching goals.

The increasing engagement of the Society, and things like the development of clinical guidelines, opened up a whole new era of work. Public engagement was something we certainly didn’t do in my early days but, during my involvement with the Society, I decided we would develop this area of work, which has been very successful. We started doing events around the country and things like that. It’s so important to get our science out to the general public, whether you’re doing something very exciting clinically, where the public can see real benefit, or whether you’re doing the fundamental stuff, to help the public understand how important it is, to get it to the point where it can be clinically valuable.

It is also crucial to enthuse young people to come into the Society. Endocrinology struggles because we don’t have an undergraduate programme. So there isn’t a natural pipeline into the field. And I think that remains quite a challenge for us going forward.

KJ: How much have your field and research changed during your career?

JB: I haven’t done research now for 10 years or so. The field has changed on an unrecognisable scale. When I started, we didn’t sequence genomes or anything exciting like that. It took a whole week to assay 10 samples of ACTH. The idea that you can just do mass assays has been absolutely transformational. And, of course, we have molecular techniques as well.

One thing we’ve lost, and are in danger of further losing, is fundamental physiology. I have a big concern that a lot of very good scientists don’t have a strong background in basic physiology. One great thing about endocrinology is that hormones affect pretty well every cell in the body. So you need to know how the body hangs together. I find it sad sometimes that people are so very focused on one tiny mechanism that they don’t really appreciate its importance in the context of the whole body.

I remember when we first started knocking out genes, people were surprised at some of the consequences. Of course, it showed up some really interesting things, but it was very challenging. Some people could relate those findings to help our understanding of whole body physiology. When some didn’t understand the outcomes, they thought that the answer was wrong, rather than showing us something interesting and opening up a new avenue for exploration. I’m still not sure we’ve got the balance right, between being able to get down to molecular and submolecular levels, and all the way up to whole body physiology and its meaning. There is something about endocrinology (and, of course, pharmacology, which is my specialty) which involves understanding the whole body as well as the molecular.

KJ: What have been the major milestones in research during your career?

JB: In terms of technology milestones, they’re uncountable. Immunogold electron microscopy meant we could actually look at where molecules are in cells and how they interact with one another. Crystallography is another hugely important thing. So there are masses of them. They have all come together to give us a much better knowledge and understanding – but also many more questions.

Some things that epidemiologists have thrown up are absolutely fascinating. And then, of course, if you think of the whole area of developmental programming, for example, that really stemmed out of epidemiology. So, as an endocrinologist, keeping an eye on what is happening elsewhere in science is very important.

KJ: What are you most looking forward to seeing in the future of endocrinology?

JB: I guess, things ‘getting into’ patients. It would be wonderful if we could, for example, solve type 2 diabetes, or find a really good way of handling obesity. There are massive challenges. Equally, we’re seeing some brilliant developments in cancers. I’m hopeful that some of the stuff that’s come out of the pandemic, in terms of technologies, might be applicable to cancers, but it’s not my field. I do think it’s ultimately about translating things into improving patient care, and also veterinary medicine and conservation.

KJ: If you had a crystal ball, what major changes in endocrine research would you predict in the next 75 years?

JB: Well, it will be so different then, we’ll probably all be microchipped. And that’s how we’ll control hormones, or something like that. It’ll be something quite extraordinary that none of us can even conceive now. If we went back 75 years, it would be the end of the Second World War. Could people then have foreseen how we are now? It’s just impossible to imagine.

It’ll be interesting, seeing how society evolves in that time – and how many new diseases will emerge, triggered by our lifestyle and behaviour, and influenced by our genes. But the idea that we could all have a little microchip, to control all ills, would be brilliant.

KJ: Thank you Julia. It’s been great speaking with such an inspirational endocrinologist and advocate of the Society.