WIEBKE ARLT: THE STORY OF AN INSPIRING ENDOCRINOLOGIST

For this anniversary issue of The Endocrinologist, I had the absolute pleasure of interviewing Professor Wiebke Arlt. Wiebke is someone I greatly admire, and so I was delighted when we had a great chat one Saturday morning.

Wiebke’s formal titles include William Withering Chair of Medicine, University of Birmingham; Director of the Institute of Metabolism and Systems Research (IMSR); College Lead for Equality, Diversity and Inclusion; Honorary Consultant at the Queen Elizabeth Hospital Birmingham and the Birmingham Health Partners Centre for Endocrinology, Diabetes and Metabolism; Fellow of the Academy of Medical Sciences; and Editor-in-Chief of European Journal of Endocrinology. While these summarise some of her roles, they only scratch the surface of describing what she does. 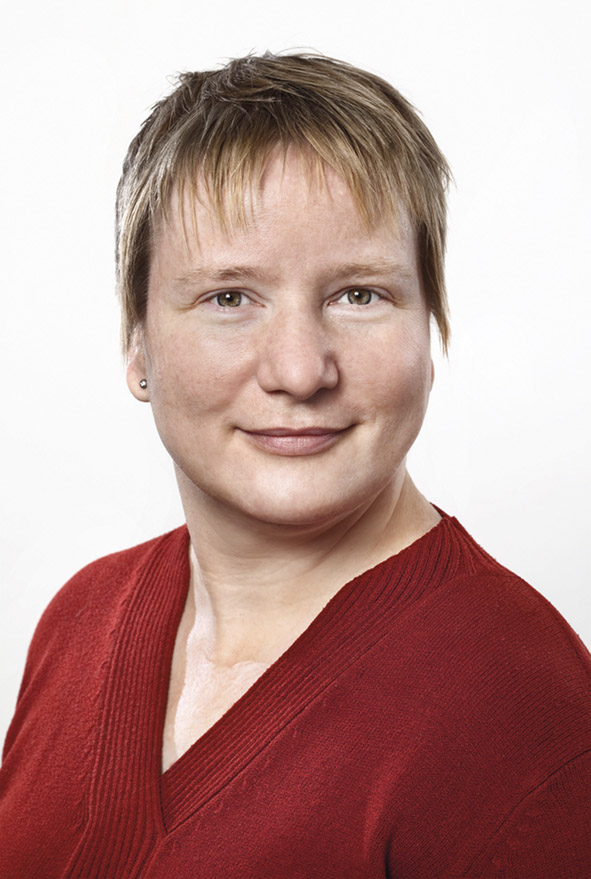 Her endocrinology journey started in Cologne, Germany, where, as an anonymous second year medical student in a class of 650, she thought about giving up medicine after studying basic science with seemingly little relevance to clinical practice. In her third year, she had to choose an elective. There were eight places: seven in cardiology, one in endocrinology. She chose the endocrinology ward as, at that time, she wanted to do neuroscience, and thought there might be more links with endocrinology than cardiology.

The experience sounds similar to working in UK tertiary units ‘back in the day’ – a ward full of phaeos, Cushing’s, acromegaly and 10-minute blood samples, giving her a great clinical training and understanding of endocrine physiology. In addition, this is where she met Bruno Allolio, the ward endocrine registrar. During this time, she first felt seen as a person and clearly had a joy for clinical medicine.

A GATEWAY TO ENDOCRINOLOGY

Subsequently, she chose to do a part-time research MD. She chose a project with Bruno as her supervisor. He talked her into studying the adrenal gland and, whilst Wiebke was not initially convinced, she went with it. The rest, as they say, is history.

As part of her MD project, Wiebke went on an elective in 1990 to Uganda. At that time, Uganda was an unsafe country: civil wars were raging, and she describes herself as young and naïve. To me, she seems very brave and independent-minded and, after this experience, I imagine nothing would phase her.

She was in Uganda for four months, travelling from clinic to clinic in a Jeep to see patients with sleeping sickness. The sole doctor in the region stayed put at the only hospital, so Wiebke (a medical student) would be the only ‘doctor’ seen by many patients in the numerous health centres. Supervision consisted of a prebooked weekly phone call to Bruno. Here, she learnt decision-making and thinking quickly on her feet, and a love of research was born.

Thankfully, she safely returned to Germany. Bruno had moved on to a professorship in Würzburg. While she waited for a job with him, she trained in neurology/psychiatry (Wiebke is a qualified psychoanalyst).

An opening came up in Würzburg, and she finished her training in endocrinology, diabetes and general medicine. It was here she started working on dehydroepiandrosterone (DHEA) biosynthesis. She learnt from Bruno how to ask a big question and to drill deep. A great deal of DHEA is synthesised in the adrenal, and little was understood of its function.

THE ROAD TO BIRMINGHAM

She then was awarded a German Research Council postdoc fellowship and moved to the University of California at San Francisco to work with Walter Miller, a pioneer in steroid metabolism and congenital adrenal hyperplasia. During this time, she presented her adrenal work at a meeting in Toronto, Canada, and met Paul Stewart, who invited her to visit him in Birmingham in the UK. She was inspired by Paul’s approach to the investigation of the cortisol–cortisone shuttle. This informed her strategy for her own work on androgen biosynthesis and metabolism as she progressed.

In 2002, she moved to join the Birmingham team, supported by a German Research Council Heisenberg Senior Fellowship. Since then, she has gone from strength to strength, starting off with an MRC Senior Clinical Fellowship looking at pre-receptor metabolism of DHEA, and then an MRC Programme Grant.

In 2003, she started a specialist adrenal service which now has grown to involve a multidisciplinary team, has nurse-led clinics and has served as a model across a variety of clinical services in Birmingham.

Cedric Shackleton was another important mentor, colleague and friend. He introduced Wiebke to multisteroid profiling by mass spectrometry. She continued to blend clinical and scientific work and her group went on to discover mutations in the co-factor enzymes cytochrome P450 oxidoreductase and 3’-phosphoadenosine 5’-phosphosulfate (PAPS) synthase 2: genetic causes of androgen deficiency and androgen excess.

In 2003, she started a specialist adrenal service which now has grown to involve a multidisciplinary team, has nurse-led clinics and has served as a model across a variety of clinical services in Birmingham. Here, clinical care drives research, demonstrating a symbiotic relationship between the two. Some 98% of patients agree to participate in research after informed consent, providing samples to biobanks and research projects.

Angela Taylor joined in 2009 as a postdoc, bringing expertise in tandem mass spectrometry for steroid analysis. Through collaboration with computer scientists, Wiebke established steroid metabolomics. This combines mass spectrometry-based steroid profiling with data analysis by machine learning-based algorithms: a blueprint for moving machine learning into clinical medicine. It is bearing fruit now, following the successful completion of the European Network for the Study of Adrenal Tumors (ENS@T) EURINE-ACT adrenal tumour project, which brings this high throughput methodology to characterise adrenal nodules ever closer to clinical practice.

Another theme that has stayed with Wiebke is equality and diversity. Her mother was offered a scholarship at grammar school which was taken away, as her mothers’ parents did not think girls required a higher education. Her father was a chemist, the first generation of the family to go to university. It was from him that she derived her interest in steroid biochemistry. She credits her parents for supporting and encouraging her to do whatever she wanted.

In Würzburg, there was not a single female professor. When she moved to the UK, she perceived it as ‘revolutionary’, with its provision of childcare and part-time working, hardly available anywhere in German clinical and academic centres at that time.

In Würzburg, there was not a single female professor. When she moved to the UK, she perceived it as ‘revolutionary’, with its provision of childcare and part-time working...

Wiebke has a number of mentoring roles, and is convinced that kindness and an interest in people brings out the best in them. Her passion for mentoring seems to have stemmed from observing Bruno Allolio, who always took time to understand what trainees felt was truly important to them. He once even successfully redirected a ‘failed’ junior doctor, who had always wanted to be an astronaut, to the European Space Agency.

At the Academy of Medical Sciences, Wiebke served as the Chair of the Starter Grant Panel for Clinical Lecturers, and is a long-standing Mentor for the SUSTAIN Leadership and Mentorship Programme for female researchers leading their first group. She is keen to also expand this model to others who may be held back due to different circumstances, such as first-generation scholars, migrants and LGBTQ researchers.

In her view, it is important that we all have mentors external to our departments, as there are lots of dependencies and anxieties in our workplaces. We all have different leadership styles and, by learning about ourselves, we can become more effective at supporting others. Another model she uses is sitting in with clinical trainees during clinic, to see how they work, and targeting where they could do things differently, in order to help them develop.

Reflecting on the Society for Endocrinology, Wiebke describes it as ‘welcoming and helpful’ when she arrived in the UK. She found the networking opportunities to meet endocrinologists from other UK centres invaluable, and describes the meetings as ‘world class with a smaller, family atmosphere’ compared with some of the larger European and American meetings.

Wiebke has also very much been part of the Society, chairing the Clinical Committee, where she started the work on the Steroid Emergency Card, and serving on the Programme Organising Committee and as Programme Chair for Clinical Endocrine Update.

Over the next 75 years, Wiebke feels the Society just needs to carry on doing what it is doing. The Society adapts rapidly, has a broad base, bringing all members of the endocrine community, public and patients together, and keeps an open mind. She says, ‘Keep up the good work!’. In her mind, the future challenges we need to meet include motivating the brightest young sparks to become clinical and academic endocrinologists. This also requires us to address the current shortage in opportunities for academic endocrinologists after obtaining a certificate of completion of training.

She is most proud of the people she has helped to train, to become academic and clinical leaders. There are ‘Arlties’ now around the world.

What really shone out to me during our chat was how, whilst Wiebke has many roles, they interlink and feed from her experiences over her career. There is a thread to Wiebke’s journey, as she builds on themes at each career stage. These include a love for endocrinology and the enduring impact of Bruno Allolio.

The combination of clinical, scientific and leadership roles is key, as is being passionate about mentoring: supporting people to develop as individuals. Fittingly, she is most proud of the people she has helped to train, to become academic and clinical leaders. There are ‘Arlties’ now around the world. These include Irina Bancos (USA), Nicole Reisch (Germany), Dimitra Vassiliadi (Greece), Johannes (Hans) Hofland (The Netherlands) and Mick O’Reilly (Ireland), to name but a few, and too many to mention in Birmingham currently.

As for Wiebke herself, I can’t imagine after working in Uganda, as she did during her formative years, she is scared of much – and I cannot envisage her being put off by anything. She is a wonderful inspiration for those in the Society for Endocrinology, to take us through the next 75 years.

AN INTERVIEW WITH… ROB FOWKES
Top
PATIENTS, PARTNERSHIPS AND A PANDEMIC