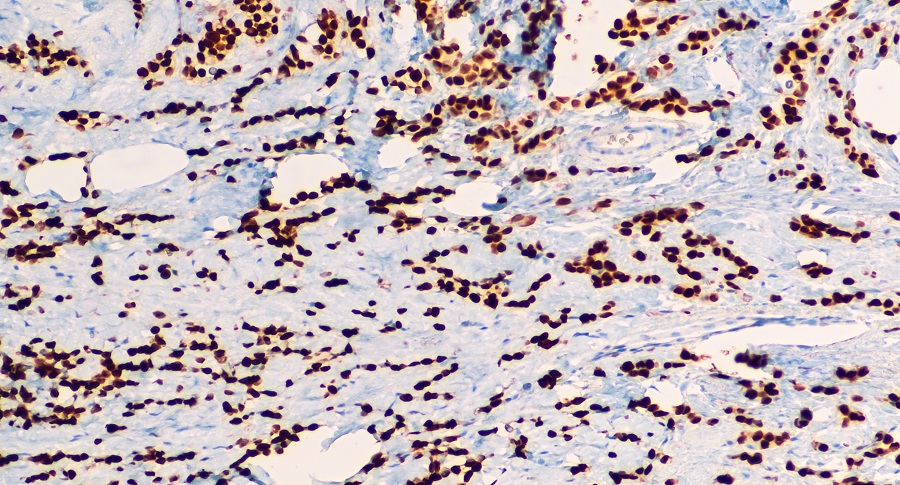 Endocrine therapy for hormone receptor (HR)-positive breast cancer has been an incredible success story, drastically reducing the rate of disease recurrence. Around 70% of breast cancers are HR-positive and express the oestrogen receptor (ER), a ligand-dependant transcription factor that transduces oestrogen signalling to pro-survival transcriptional programmes.

In this cancer subtype, the ER is the driver of cell growth and is the target for systemic endocrine treatment in both adjuvant and metastatic settings.1 Inhibition of ER signalling may be achieved by the following means:

Five years of adjuvant endocrine therapy reduces the relative breast cancer recurrence and mortality rates by about 50 and 33% respectively, and has a prolonged carry-over effect on mortality throughout the first 15 years.2 However, HR-positive breast cancers have a long natural history, and approximately equal proportions of patients with early stage breast cancer treated with 5 years of tamoxifen will relapse between 0–5 and 5–14 years from diagnosis.2

To reduce the incidence of late recurrences, multiple trials have shown that disease-free survival benefits from extending adjuvant endocrine therapy to 10 years.1,3,4 Unfortunately, the absolute benefit of extended therapy is small, and comes at the cost of therapy-associated morbidity, including an increased risk of uterine cancer and thromboembolic disease with tamoxifen, and osteoporosis and fractures with AIs. There is a clear need for better adjuvant strategies than merely extending the duration of endocrine therapy.

TACKLING THE PROBLEM OF RESISTANCE

Endocrine therapies target either the ligand or the transcription factor, and resistance to these therapies can be acquired by dispensing with ligand dependence or with reliance on ER-driven transcription.

Activating mutations of the ESR1 gene (which encodes ER) can confer ligand independence and have been reported in cell-free DNA (cfDNA) of 39% of patients with metastatic, endocrine-resistant disease.5 The presence of ESR1 mutations is associated with poorer outcomes and resistance to further AI therapy.5 However, tumours harbouring ESR1 mutations are relatively more sensitive to alternative endocrine therapies such as SERDs, which degrade the ER protein, rather than the oestrogen/ER interaction.

ER signalling is regulated epigenetically, and it has recently been shown that epigenetic methylation (switching off ) of ER-responsive enhancer elements is associated with reduced expression of key regulators of ER action and the development of resistance.6 Etinostat, a histone deacetylase inhibitor that acts by reversing epigenetic transcriptional silencing, has been granted breakthrough therapy designation by the US Food and Drug Administration (FDA) in combination with the AI exemestane, based on promising phase II results from the Encore 301 study.7

The PI3K pathway is activated by multiple stimuli and transduces growth and survival signals. Hyperactivation of this pathway is common in endocrineresistant breast cancer,9 and can result from epigenetic dysregulation of the pathway, aberrant activation of upstream signalling factors or activating mutation of key pathway components. Several PI3K pathway-targeting drugs are currently in phase III clinical trials, and the mTOR inhibitor everolimus has been approved by the FDA in combination with exemestane for patients that have progressed on prior AI therapy. The pivotal phase III BOLERO 2 trial demonstrated an improvement in median progression-free survival (PFS) from 3.2 months (exemestane) to 7.8 months (exemestane plus everolimus).10

Cyclin D transcription is a key ER proliferative target which controls cell cycle progression from G1 to S phase via activation of CDK4/6. ER-independent expression and stabilisation of cyclin D is linked to acquisition of endocrine resistance, and blocking the action of CDK4/6 can resensitise endocrine-resistant cancer cells to endocrine therapy. The CDK4/6 inhibitor palbociclib has recently been approved for use in metastatic breast cancer in combination with an AI by the FDA.

The phase III PALOMA 3 study in patients who progressed on prior AI therapy demonstrated an improvement in median PFS from 3.8 months (fulvestrant) to 9.2 months (fulvestrant plus palbociclib).11 In the first-line metastatic setting, the phase III PALOMA 2 trial reported an increase of median PFS from 14.5 months (AI letrozole) to 24.8 months (letrozole plus palbociclib),12 which is the longest duration of any therapeutic strategy in metastatic ER-positive breast cancer to date. This combination strategy was effective in patients with cfDNA that were either ESR1 wild type or mutant.5

Combination therapeutic strategies with an endocrine backbone that have significantly improved outcomes in the metastatic setting are now being employed in the adjuvant setting, particularly in patients with higher risk disease.

Bone modifying agents such as bisphosphonates were initially used to reduce osteoporosis and fractures in AI-treated patients and patients with bone metastases. They have now also been shown to reduce recurrence rates of breast cancer in the adjuvant setting, but only in post-menopausal women.13

On the horizon are new and more effective SERDs. These can be administered orally, and have been shown to have greater preclinical activity compared with fulvestrant, including in ESR1 mutant models.14

Finally, there is increasing evidence of interplay between sex steroid receptors, including the ER and androgen and progesterone receptors (AR and PR).15 Therapeutic strategies that modulate ARs and PRs are being evaluated in ER-positive breast cancer.

In summary, there is a renaissance in the treatment of ER-positive breast cancer. The therapeutic repertoire in the management of our patients has never been as diverse as it is today.

Endocrinologists and the consequences of cancer treatment
Top
Endocrinology and behaviour: a stress-free approach to improving animal welfare