Shedding light on sleep and arousal 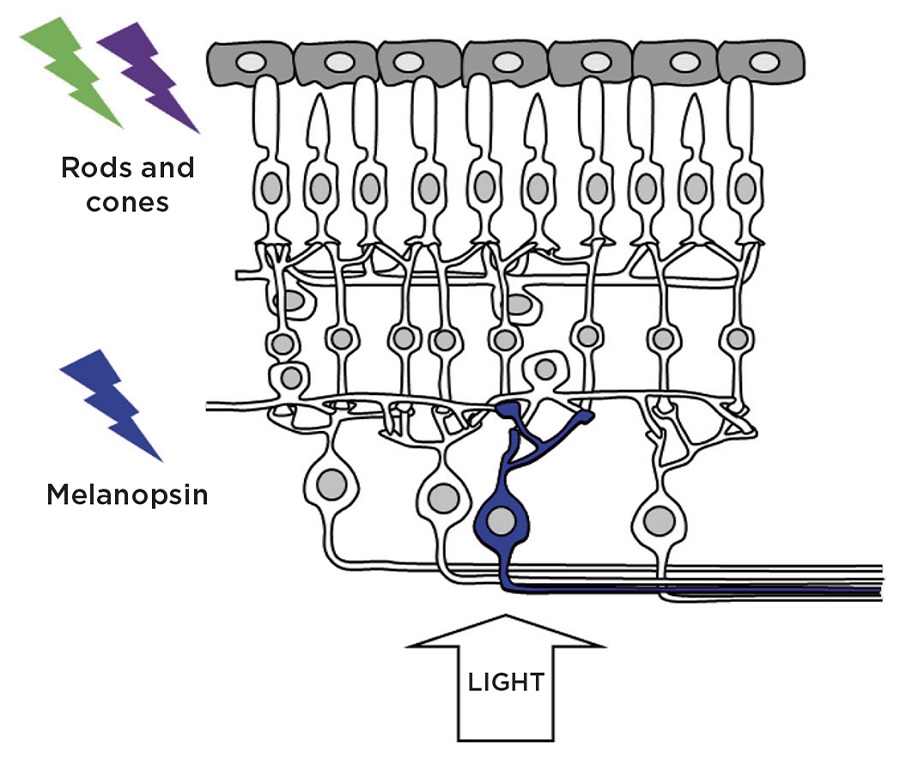 Figure 1. Retinal photoreceptors: in addition to the rod and cone photoreceptors which mediate vision, a subset of photosensitive retinal ganglion cells (pRGCs) express the photopigment melanopsin and are critically important in the regulation of a wide range of non-imageforming responses to light. Credit: S.Peirson

We spend around a third of our lives asleep. Sleep disruption is a major contributing factor to health problems ranging from poor vigilance and memory, reduced reaction times, reduced motivation, depression, metabolic abnormalities and obesity to impaired immune function and elevated risks of cancer and coronary heart disease.

The sleep/wakefulness cycle is a complex process, involving multiple areas of the brain and all the key neurotransmitters. These complex neural networks are regulated by ‘sleep pressure’, the familiar process whereby being awake gives rise to an increased requirement for sleep (also called the sleep homeostat), as well as a drive for wakefulness produced by the body’s internal 24-h (circadian) clock.

Light exerts profound effects upon our physiology and behaviour. The familiar function of the eye is as an image detector, but the eye also detects environmental irradiance for the regulation of the circadian system (entrainment), sleep propensity and levels of alertness.

We now appreciate that the eye performs two very different sensory tasks – it generates a visual image of the world and samples the gross changes in the light environment to drive responses including entrainment and the regulation of sleep.

To address these contradictory findings, we studied the responses of mice to light of different wavelengths (colours). Given the previous data on the role of melanopsin in the regulation of sleep, we predicted that blue wavelength light would be the most effective at inducing sleep. Surprisingly, we found that blue light inhibited sleep induction, whilst green light resulted in rapid sleep onset! An explanation for these findings comes from the opposing effects of different wavelengths of light on two different neural pathways.

Melanopsin-expressing pRGCs signal to the master circadian clock in the suprachiasmatic nucleus (SCN) as well as the sleep switch in the ventrolateral preoptic area (VLPO). In addition, projections from the SCN also directly regulate the sympathetic nervous system, leading to behavioural arousal and elevated adrenal corticosterone levels. 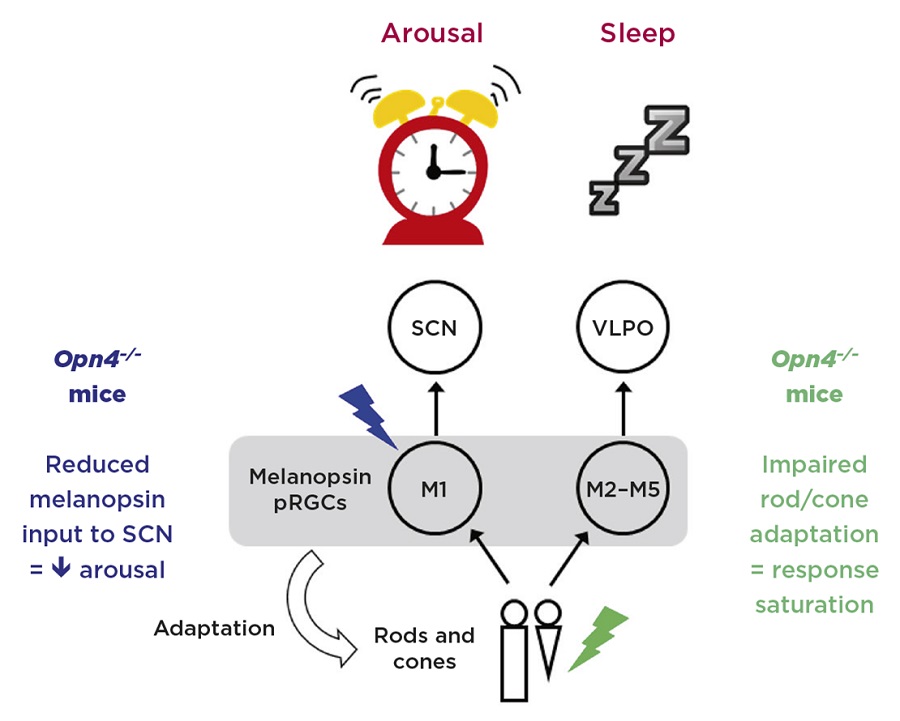 Significantly, the light input to the SCN, which stimulates arousal, is thought to be largely driven by M1 cells, which, because of their dependence upon melanopsin, are predominantly blue-light sensitive. By contrast, the sleep-promoting signal to the VLPO appears to be derived from M2–M5 cells which, because of their strong rod/cone inputs, are effectively more green-sensitive. Such conclusions are supported by findings showing that cells in the SCN are more strongly stimulated by blue light, whilst the cells of the VLPO show stronger responses to green light (Figure 2).

But why do mice lacking melanopsin show impaired responses to green light? An explanation comes from recent data showing that melanopsin also appears to play a role in the light adaptation of rod and cone pathways.

Adaptation is the ability of the visual system to adjust its sensitivity to the background light level, so that objects can be detected against background under both very low light levels (dark adaptation) and very bright light (light adaptation). The retina accomplishes this by switching from rod- to cone-based vision as light levels increase, as well as by cellular changes in photoreceptor sensitivity. Furthermore, changes in retinal circuits also occur, and central to this task is the ability to accurately measure ambient light levels.

Melanopsin plays a key role in light adaptation, acting as a light meter to adjust the sensitivity of the retina. As such, mice lacking melanopsin show impaired light adaptation under bright light, saturating more quickly, and resulting in impaired responses under green light.

These data show that different wavelengths of light can promote either sleep (green light) or arousal (blue light) in mice, and demonstrate that the regulation of sleep in response to light is considerably more complex than originally conceived.

Clearly, translating these discoveries in mice to a diurnal species such as humans is complex, but the findings presented here will provide a platform to develop experimental protocols in order to understand how the different photoreceptors of the eye drive sleep and arousal in humans.

Such knowledge will be critical if we are to understand how inappropriately timed exposure to artificial lighting, such as blue-enriched LED light from mobile devices such as laptops, tablets and smartphones, will or will not disrupt sleep.