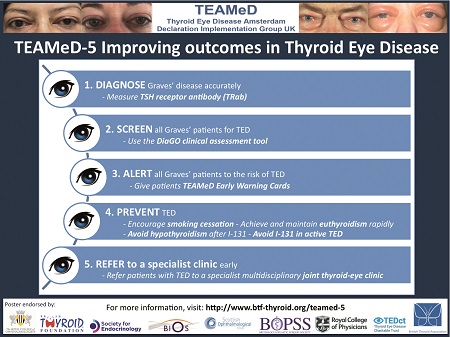 TEAMeD (Thyroid Eye Disease Amsterdam Declaration Implementation Group UK) was established in 2009 to implement the Amsterdam Declaration, which pledged to improve care for people with TED and prevent TED in those at risk. This autumn, TEAMeD is launching ‘TEAMeD-5’, a campaign to promote better care for patients with, or at risk of, TED. This campaign seeks to promote five recommendations in TED management (Figure 1).

Thyroid eye disease (TED) is a distressing complication of Graves’ disease. TED can have a significant and negative impact upon the quality of patients’ lives and visual function. Delays in making a diagnosis of TED and initiating treatment are common. A recent study has shown that the median time from first symptoms to a diagnosis of TED is 7 months, and the median time from first visit to any doctor with symptoms to diagnosis is 2 months.1

Graves’ disease, the most common cause of hyperthyroidism in the UK, is caused by autoantibodies to the TSH receptor (TRab). Reliable, low cost TRab assays are available and can diagnose Graves’ disease with >95% sensitivity and specificity.2 A positive TRab test in the context of thyrotoxicosis identifies those at risk of TED, with higher TRab levels being associated with greater TED incidence and severity. TRab testing is still not routine in the diagnosis of thyrotoxicosis in many parts of the UK. However, using this test in all thyrotoxic patients is strongly recommended in order to target TRab-positive individuals with measures to increase awareness and reduce the risk of TED (see TEAMeD-5 points 2–4 below). Patients without circulating TRab are at very low risk of TED.

TEAMeD recommends that an accurate diagnosis of the cause is made in all cases of thyrotoxicosis to determine the risk of TED; TRab testing is a useful tool in the diagnosis of Graves’ disease.

2. SCREEN ALL GRAVES’ PATIENTS FOR TED

Use the DiaGO clinical assessment tool

It can be challenging for endocrinologists to recognise TED and decide who should be referred for ophthalmic care. TEAMeD has developed DiaGO, a clinical assessment tool to screen all patients with Graves’ disease for signs and symptoms of TED, for use in general endocrinology clinics.3 DiaGO comprises 20 yes/no questions which aim to elicit signs and symptoms of TED. DiaGO has been tested and was found to be highly sensitive in picking up TED with a low false-positive rate (<8%). Half the individuals referred to the specialist clinic were offered ophthalmic treatment. This suggests that use of the tool is actively altering management in patients who might not otherwise have been referred and treated. DiaGO is easy to use (it can be completed in less than 5 minutes) and does not require specialist ophthalmic skills.

TEAMeD recommends a systematic assessment for early signs/ symptoms of TED in all patients reviewed in endocrine clinics with an established diagnosis of Graves’ disease. This permits prompt and timely referral to appropriate ophthalmic care.

3. ALERT ALL GRAVES’ PATIENTS TO THE RISK OF TED 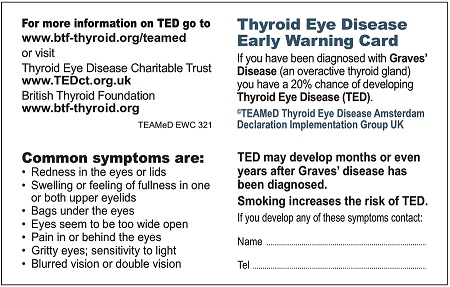 Increasing awareness of the early signs of TED in all patients with Graves’ disease aims to reduce delays in presentation and diagnosis. TEAMeD has developed TED ‘Early Warning Cards’, which can be given to all patients with an established diagnosis of Graves’ disease (but currently without TED), to raise awareness of TED and to facilitate earlier diagnosis (Figure 2). The Early Warning Card describes common symptoms of TED and has space for a local telephone number which can be contacted by individuals with concerns. In patients with Graves’ disease but without TED at baseline, the incidence of TED is expected to be approximately 15% per annum. In a pilot study of 160 patients who were issued with TEAMeD Early Warning Cards, 6% contacted their endocrine service about new eye symptoms.

TEAMeD recommends that all patients with Graves’ disease are informed about the risk of TED and given an Early Warning Card, as shown in Figure 2.

Avoid hypothyroidism after 131I

Avoid 131I in active TED

Current smoking is the strongest risk factor for developing TED.4 Patients with Graves’ disease who smoke are approximately five times more likely to develop TED than non-smokers, and smokers tend to have more severe disease than non-smokers.4 There is evidence for a dose–response relationship between smoking and the severity of TED.5 Smoking cessation advice should be given to all Graves’ disease and TED patients who are current smokers and they should be referred to smoking cessation services for support with quitting. TEAMeD has developed a web-based smoking cessation tool specifically for patients with Graves’ disease and TED, to deliver advice on the risks of smoking and the benefits of smoking cessation. Thyroid dysfunction (untreated hyperthyroidism and hypothyroidism) is associated with an increased risk of severe TED.6 Radioactive iodine treatment (131I) is associated with worsening of existing TED and an increased risk of developing TED de novo, in the order of 15–30%.7 In addition, 131I results in a period of hypothyroidism in up to 60% of individuals,8 which can trigger or exacerbate TED.

Clinicians should focus on preventing hypothyroidism (which is inevitable in the majority of patients post-131I), by timely introduction of levothyroxine replacement. Thyroid function tests should be undertaken every 1–2 months for the first 6 months, beginning no later than 4 weeks after treatment. Effective communication between specialist, patient and family doctor is key. Levothyroxine should be introduced when free thyroxine levels are low or showing a downward trend within the normal reference range, even in the absence of raised TSH, as the rise in TSH may be delayed. The use of block and replace therapy has been advocated by some specialists for the first 6 months after 131I, to avoid the risk of sudden-onset hypothyroidism.

131I should be avoided in active TED (as determined by an ophthalmologist experienced in TED).9 If 131I cannot be delayed, steroid cover is recommended (oral prednisolone 0.3–0.5mg/kg, starting 1–3 days after radioiodine and gradually tapered down over 6–12 weeks9,10). In patients with inactive TED, 131I can be given safely, provided that hypothyroidism is strictly avoided after treatment.

TEAMeD recommends that all patients with Graves’ disease receiving 131I are monitored closely and treated early with thyroxine to avoid a period of hypothyroidism. In active TED, 131I therapy should either be deferred or steroid cover given.

5. REFER TO A SPECIALIST CLINIC EARLY

Refer patients with moderate or severe TED, or TED which affects their quality of life, to a specialist multidisciplinary joint thyroid eye clinic

TEAMeD has published guidelines for the management of patients with TED,9,10 with an emphasis on early recognition and diagnosis.

TED which only has a minor impact on daily life and quality of life can be described as mild TED. A TEAMeD factsheet about the recognition and management of mild TED is available. It outlines simple and effective strategies which should be offered to patients, including a 6-month course of sodium selenite at a dose of 100µg twice daily (equivalent to a total daily dose of 91.3μg of elemental selenium) and topical lubricants (artificial tears and ointments). Patients with Graves’ disease hyperthyroidism with mild TED can be managed by an endocrinologist with an interest in TED.

All patients with moderate to severe TED (patients with sight-threatening TED, diplopia or whose eye disease has sufficient impact on daily life to justify the risks of immunosuppression or surgical intervention), those with mild TED that progresses and those whose TED has a significant impact upon their quality of life, regardless of severity, should be referred to a joint multidisciplinary thyroid eye clinic. Early expert management of active TED has the potential to improve long term outcomes. Patients with new or recent-onset visual impairment should be referred urgently and seen within 2 weeks.

TEAMeD has collaborated with the British Oculoplastic Surgical Society (BOPSS) to develop defining criteria for a specialist service, and agreed audit standards. To avoid delays in this complex disease and to optimise outcomes, it is recommended that all patients with referable TED are referred directly to a specialist clinic. Key elements of a specialist TED service include a joint service with endocrinology and access to all surgical (decompression, strabismus correction and oculoplastic surgery) and immunomodulatory expertise that may be required.9

TEAMeD recommends that endocrine teams identify a specialist multidisciplinary thyroid eye clinic in their region consistent with BOPSS recommendations, and refer all patients with moderate or severe TED or TED affecting the patients’ quality of life to this service.

TEAMeD-5 will be officially launched at the Society for Endocrinology BES conference in November. To find out more about the TEAMeD website.