The browning of white fat

The process of ‘browning’ white adipose tissue (WAT) has become a key focus area in research, due its fat burning potential for obesity treatment.

Functional brown adipose tissue (BAT) has been identified in adult humans by positron emission tomography–computed tomography (PET-CT) scans, as its high requirement for energy substrate instigates the rapid uptake of radiolabelled glucose. The substantial energy needs of BAT are a consequence of its unique property of heat production by adaptive thermogenesis. This process mediates the breakdown of energy substrates without the generation of ATP. Therefore, energy dissipation by BAT has the capacity to control obesity by diverting excess fat into heat production.

Adipose tissue comes in two main types: WAT, which is the primary site of energy storage, and BAT, which stores lower levels of fat and can be activated to oxidise fatty acids to maintain body temperature. These tissues are composed mainly of white and brown adipocytes respectively. 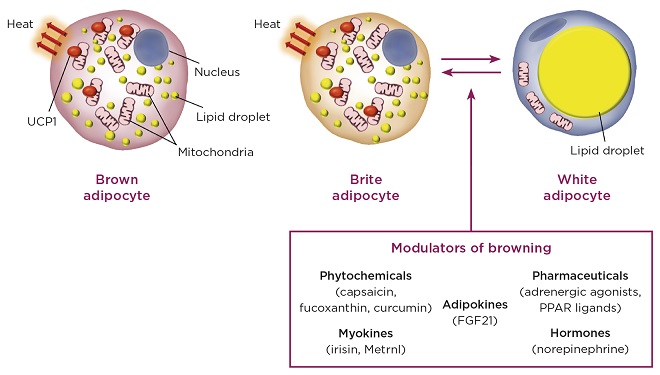 Adipose tissue is incredibly dynamic and responds to stimuli including external environmental and dietary cues. The plasticity of WAT is demonstrated by a large increase in the number of brown adipocyte-like cells, termed beige or brite (brown-in-white) adipocytes, upon sustained cold exposure or direct β-adrenergic activation.

INTERCONVERSION OF WHITE AND BRITE ADIPOCYTES

Elegant lineage tracing studies have revealed a remarkable property of adipocytes in WAT. White adipocytes within the subcutaneous WAT depot were found to reversibly convert to brite adipocytes. Furthermore, whereas classical brown adipocytes share a common Myf5-expressing precursor with muscle cells, brite fat cells derive from both Myf5-negative and -positive precursors. The white–brite adipocyte transdifferentiation events are evident at the gene expression and morphological levels, with reversible transitions between the appearance of unilocular and multilocular lipid droplets. These findings illustrate that the remodelling of WAT to gain and lose BAT properties is facilitated by profound changes within existing differentiated adipocytes.

The most studied pathway known to induce the browning of white adipocytes works through the actions of norepinephrine. This is released from sympathetic nerve endings and acts on β-adrenergic receptors on the surface of adipocytes. In addition, cold exposure increases secretion of the myokine irisin and the brown adipokine fibroblast growth factor-21 (FGF21). An additional exercise- and cold-induced myokine hormone (meteorin-like; Metrnl) was recently discovered. These secreted factors promote browning of white adipocytes and represent connections between muscle, BAT and WAT, orchestrating cold-induced adaptive thermogenesis.

Although UCP1 expression is a main characteristic of brite cells and routinely used for identifying browning of WAT, other essential events occur during this process, such as mitochondrial biogenesis and increases in the cellular capacity for glucose and fatty acid uptake and oxidation. The genes and pathways that determine the key functional and morphological differences between white and brite adipocytes are yet to be fully elucidated.

We adopted a strategy to define the brite transcriptome by comparing the expression profiles of BAT and WAT depots. To achieve this, a set of genes was identified as enriched in BAT versus WAT (from mice at thermoneutrality), as well as increased in WAT by cold exposure. This analysis confirmed the induction of the BAT genes Ucp1, Cidea, PGC-1α, Plin5 and PPARα associated with the browning of adipose tissue. Additional genes that are part of the brown/brite transcription fingerprint include the fatty acid receptor Gpr120, the regulator of G protein signalling Rgs7 and signalling factor Nrg4. These findings highlight potentially important signalling differences between white and brown/brite adipocytes.

The discovery of brite adipocytes in humans has attracted research interest in identifying pharmacological and nutritional browning activators with metabolic benefits. Strategies include up-regulating sympathetic input into WAT, increasing the sensitivity and/or amount of adrenergic receptor in WAT, and manipulating key transcription factors in the browning process. Studies in humans have shown that highly β3-selective adrenergic agonists such as mirabegron, a drug approved for treatment of overactive bladder, may increase energy expenditure with greatly reduced cardiovascular side effects compared with other sympathomimetic drugs. Phytochemicals such as the flavonoid curcumin found in turmeric promotes browning. Also, dietary capsaicin and capsinoids promote WAT browning through activation of vanilloid receptors. Similarly, fucoxanthin, from algae, and fish oil (rich in ω3 polyunsaturated fatty acids) can also induce UCP1 expression in WAT by upregulating β3-adrenergic receptor expression and consequently enhancing WAT sensitivity to adrenergic stimulation in adipocytes.

Novel approaches include re-examining the browning actions of drugs that have already been approved, such as exenatide and sildenafil (originally designed for type 2 diabetes and erectile dysfunction treatment respectively), which are subject to testing of their browning effect in phase 4 clinical trials. Such novel therapeutic strategies have the potential to treat obesity and the range of associated diseases that represent a profound burden on healthcare systems.