Iodine status: determination and optimisation in the UK and beyond

In 2015, a 3-year Horizon 20/20 grant (EUthyroid) was obtained from the EU for €3 million to document aspects relating to iodine status in around 28 European countries.

The work funded by this grant has now finished, and results of many investigations have included finding significant variation in iodine assays, widespread variation in monitoring practice across Europe and a very low knowledge base concerning iodine in the population. Other work packages concluded that determination of serum thyroglobulin is a good measure of iodine status and that iodine deficiency in pregnancy does impact negatively on child neurodevelopment.

Although some European countries have legislation to encourage the use of iodised salt at the household level and have thereby achieved adequate iodine nutrition, many countries with large populations still have suboptimal iodine status. 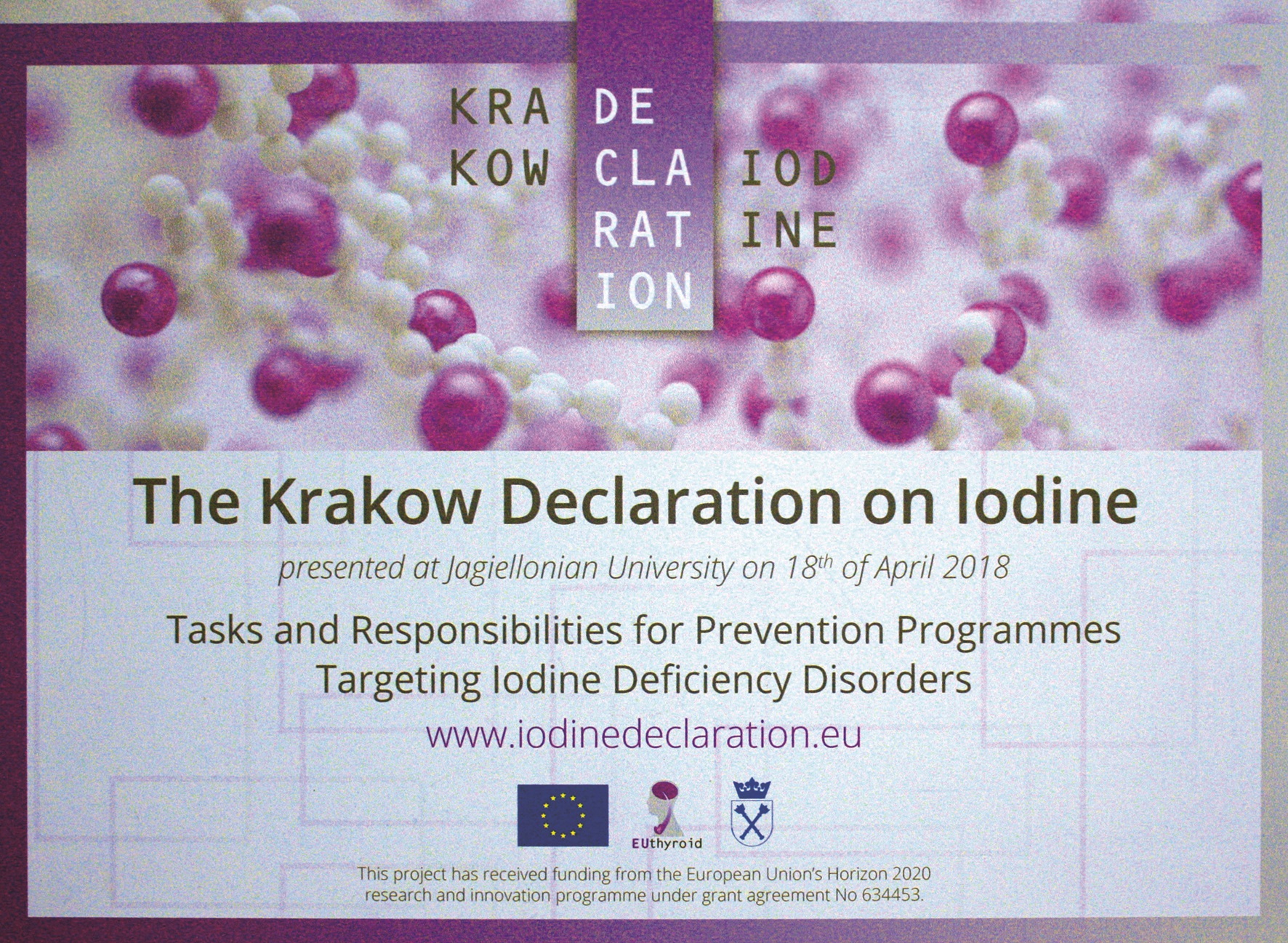 The end of the EU grant was marked by presentation of a declaration to serve as a landmark for the development of adequate iodine nutrition in Europe. This took place at a meeting in Krakow, Poland in April 2018, and has resulted in the Krakow Declaration on Iodine (www.iodinedeclaration.eu). This document indicates the ‘Tasks and Responsibilities for Prevention Programs Targeting Iodine Deficiency Disorders’. Iodine deficiency disorders (IDD) represent a global health threat to individuals and societies. The Krakow Declaration notes that adverse effects of iodine deficiency are diverse and impose a significant burden on public healthcare systems.

Although this fact is well established, IDD prevention programmes receive surprisingly little attention from policymakers, opinion leaders and the public. European epidemiologists, endocrinologists and nutritionists investigating IDD are increasingly concerned about the deteriorating commitment of policymakers to addressing public health strategies against IDD in European populations. Hence, the signatories of the Krakow Declaration on Iodine ask for support from all stakeholders across Europe and beyond, to pool resources and expertise to ensure that future generations can realise their full potential without any restrictions resulting from exposure to iodine deficiency.

THE SITUATION IN THE UK

So what is the iodine situation in UK? In 2010, some of us in the British Thyroid Association had noted that several small surveys of iodine status in pregnant women in the UK showed significant iodine deficiency in more than 50% of individuals in the first trimester.

Mark Vanderpump and colleagues then performed a survey of urinary iodine in nearly 800 teenage girls, and showed low iodine status right across the UK.1 These alarming data led to the establishment of the UK Iodine (UKI) Group (www.ukiodine.org) in 2012. This is a multidisciplinary group which aims to advocate for recognition of optimal iodine nutrition in the UK, particularly in at-risk groups such as pregnant women.

‘The UK is one of only 25 countries that does not routinely consume iodised salt. This must change.’

Over the past 6 years we have submitted comments to the Standing Advisory Committee on Nutrition (SACN), published letters in the press and been interviewed on radio concerning the suboptimal iodine status of the UK. The most recent data from the NDNS (National Diet and Nutrition Survey) showed a median urinary iodine concentration (UIC) in 16- to 49-year-old women of 102μg/l (i.e. close to the World Health Organization (WHO) limit of 100μg/l). While these values do just meet the WHO criterion for adequate intake, in this important group NDNS admits that the criterion for iodine sufficiency during pregnancy and lactation (median UIC of 150–249µg/l) is not met. These data are similar to those from other countries in Europe who have adequate iodine levels in the nonpregnant population, but levels which are very inadequate when it comes to sustaining pregnancy.

We must continue advocacy at all levels to inform the general population and government health officials about iodine deficiency in the UK and the future effect on child development. Colleagues at the University of Surrey have already published evidence that iodine deficiency in the first trimester of pregnancy has resulted in suboptimal school performance in 9-year-old children.2

In the absence of any significant consumption of iodised salt in the UK, we should encourage routine iodine supplementation before and during gestation. We must inform officials and the population that iodised salt is only very marginally more expensive than ordinary salt. Also, we agree strongly with cardiovascular colleagues on the necessity of reducing daily salt consumption, but the introduction of iodised salt will not affect this intention.

Top
Sharing and caring? Perspectives of multidisciplinary working between endocrinologists and ophthalmologists in thyroid eye disease