Sharing and caring? Perspectives of multidisciplinary working between endocrinologists and ophthalmologists in thyroid eye disease

Thyroid eye disease (TED) is an autoimmune condition affecting the orbits1 and is responsible for significant morbidity including, in rare cases, blindness.2 Affecting up to 25% of patients with Graves’ (autoimmune thyroid disease with thyrotoxicosis), TED is the most striking extrathyroidal manifestation and can be extremely difficult to treat.2,3 Yet, TED can often be undiagnosed for several months, or misdiagnosed, leading to significant delays in patient management.4

In 2009, the European Group on Graves’ Orbitopathy (EUGOGO) spearheaded an international drive to improve the care of patients with TED, with the Amsterdam Declaration signed by 84 national and international professional and patient-led organisations, including the British Thyroid Foundation. In the UK, TEAMeD (Thyroid Eye Disease Amsterdam Declaration Implementation Group) was formed to implement these objectives.5 The most recent TEAMeD-5 guidelines recommend6:

To assess awareness of these new guidelines among those managing thyroid conditions on a routine basis, we surveyed 86 endocrinologists, including consultants and registrars, as well as endocrine surgeons (Figure 1). Three-quarters (76%) of respondents were not aware of TEAMeD/TED guidelines. Only 13% currently work in a multidisciplinary setting; with 68% opting they would like to work within one. 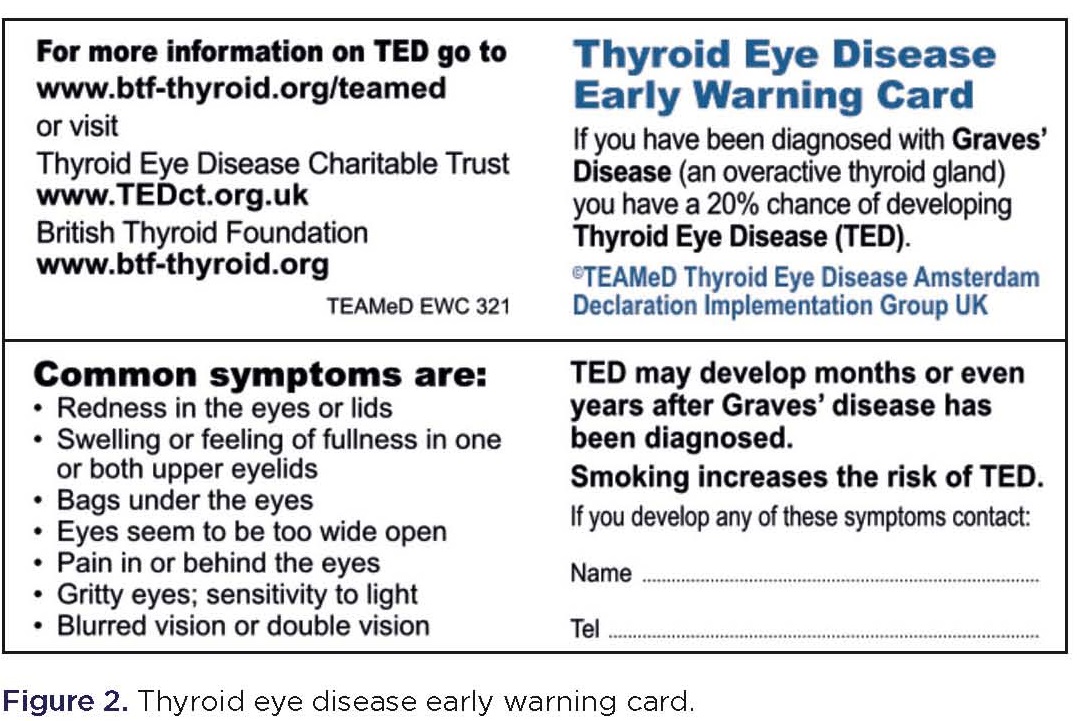 One-third of respondents rated their current department’s relationship with local ophthalmology services as good, with the remaining two-thirds stating either just ‘average’, ‘poor’ or ‘did not know’. When questioned about using a screening tool for thyroid eye disease, 20% use NOSPECS, 7% use DIAGO and 5% use the Vancouver Orbitopathy Rule. Sixty-eight per cent do not use a routine tool for screening for TED.

One of the key objectives of TEAMeD includes empowering patients with Graves’ to recognise early symptoms of TED with an early warning card (Figure 2). Of total respondents, almost two-thirds provide written/verbal advice, with the remaining one-third not routinely advising every at-risk patient about the early warning signs of thyroid eye disease.

Our survey indicates the need for increased awareness and addressing the short-fall of specialised multidisciplinary thyroid-eye clinics. There is a growing amount of evidence to show that when patients are assessed in a combined thyroid-eye clinic, they have a favourable outcome compared with patients who are not managed in such clinics.7,8 However, despite the use of specialised multidisciplinary clinics for the management of TED, many patients in the UK are managed outside of such specialised clinics. Reasons for this are likely to be multifactorial, including lack of resources and funding, and lack of awareness about these latest guidelines.

It is hoped that the new TEAMeD guidelines and the initiation of more multidisciplinary clinics, will facilitate early diagnosis and better treatment of patients with this debilitating and disfiguring disease.

Iodine status: determination and optimisation in the UK and beyond
Top
Hilary M Drane (née Grundy)