Stress in the world of finance... 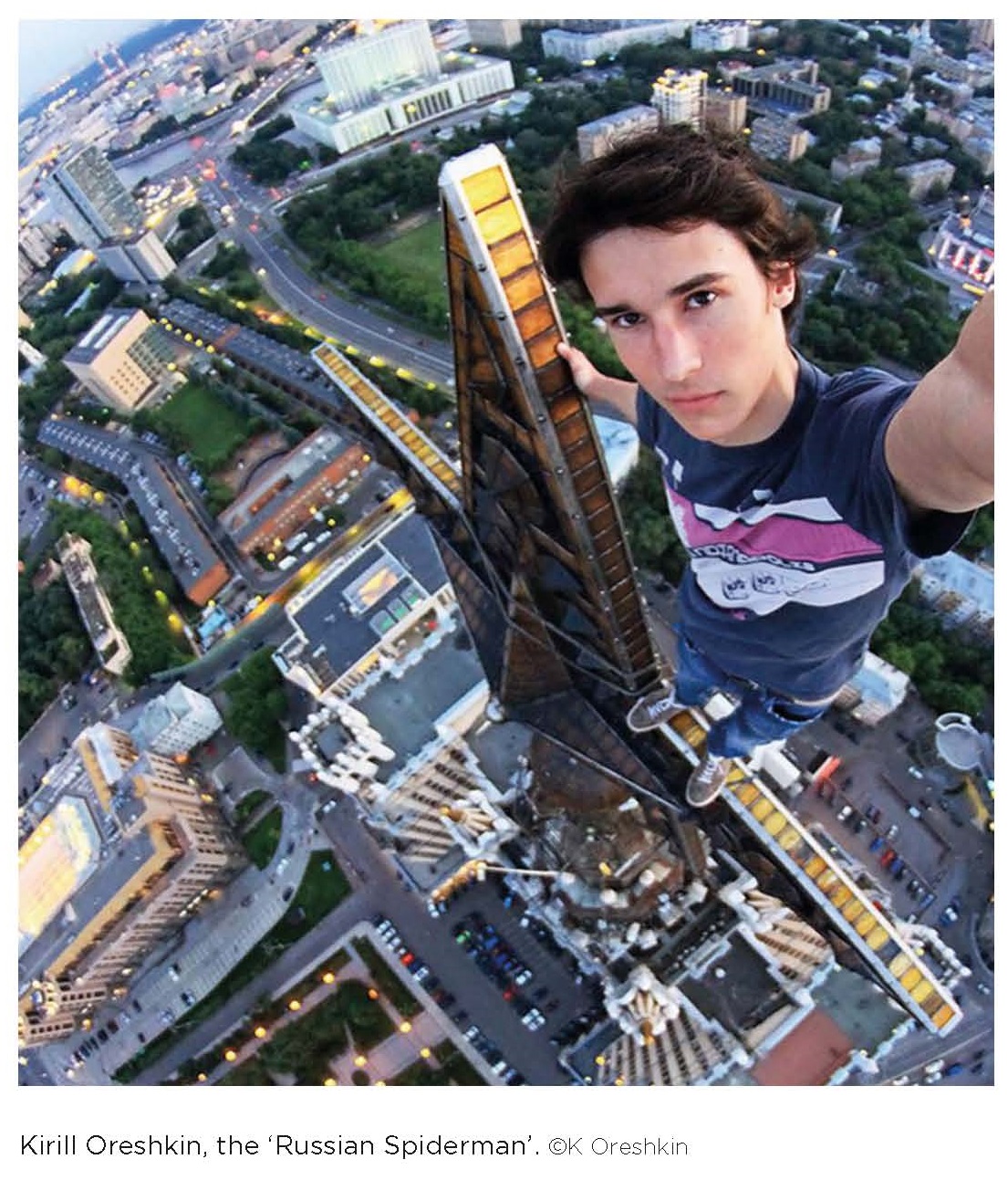 Risk-taking is a fact of life – but just how much risk we are prepared to contemplate as an individual varies enormously. If the trickiest decision of the day is whether to take your raincoat or not, then you probably aren’t in the same collective group as the so-called ‘rooftoppers’ or other ‘urban explorers’, whose antics on high-rise buildings make for eyepopping pictures (check out Kirill Oreshkin, pictured right, the Moscow-based ‘Russian Spiderman’).

Of course, risk-taking by others can have a dramatic impact on our own lives. It’s just over a decade since the financial crash of 2008, an event with ramifications that continue to reverberate around the globe. At the heart of the downturn was a misplaced optimism/belief that prosperity could continue unabated. Bankers in particular (many of whom had only ever experienced the good times) had grown over-confident.

Success in the financial markets is dependent on various traits, of which preparedness to take risks is a key one. Classical economic/finance theory postulates that we make consistent choices, based on our risk preferences, which remain relatively stable over time. Accordingly, for the most part, we therefore make rational choices.

However, even prior to the crash, some workers (including an ex- trader, Dr John Coates)1 had come to question these beliefs, pointing out that traders often seem prepared to take increasing risks during a market bubble, but become more risk averse when the markets are in decline. 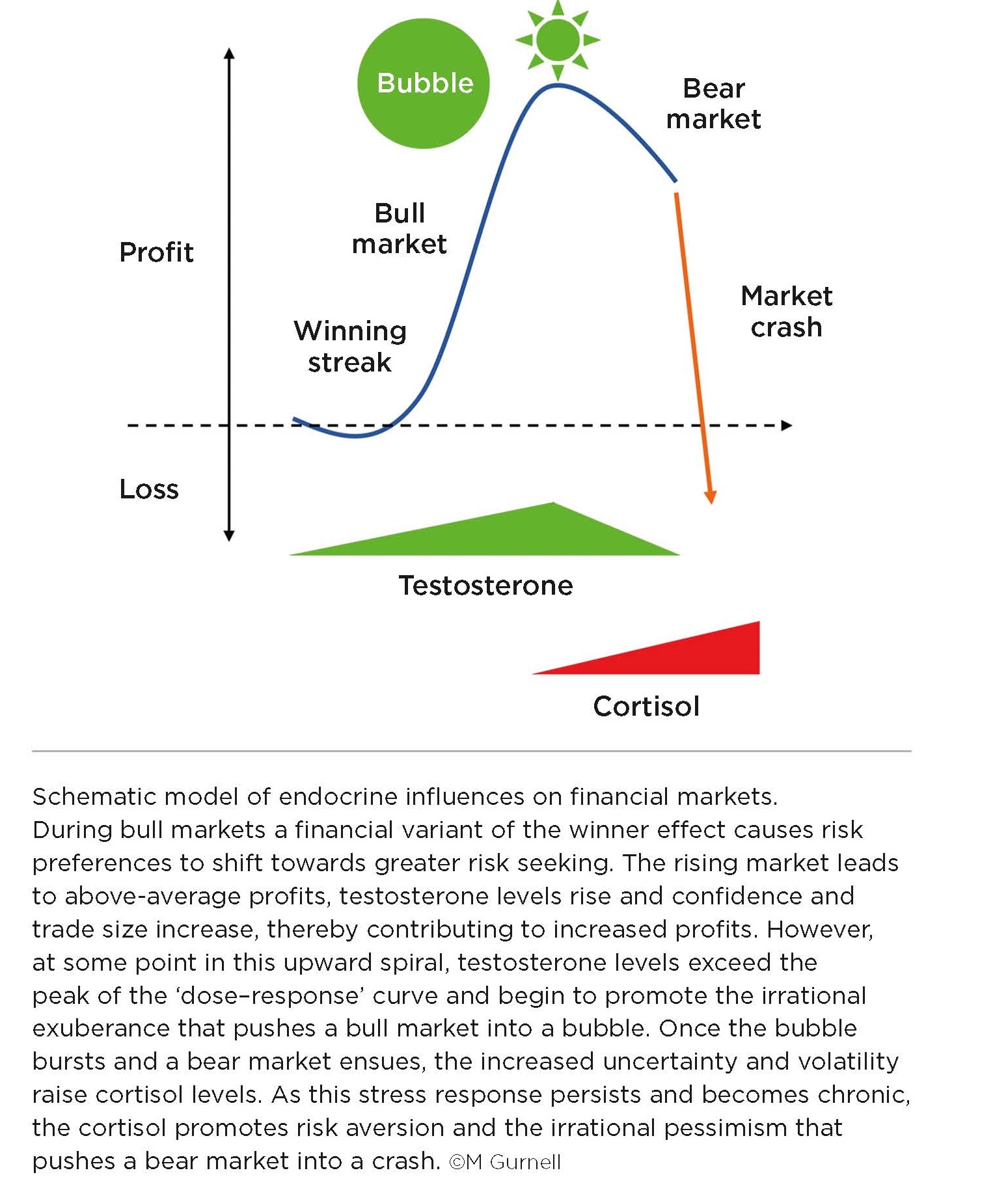 So how does endocrinology fit in to this? The first thing to say is that currently there is a paucity of ‘real life’ data in relation to female traders, and therefore what follows is a summary of findings from studies predominantly involving male traders – all of which raises the intriguing and important question as to whether a more gender-balanced environment might yield different outcomes.

In brief, evidence from studies conducted in the field (on real trading floors)2 and in the laboratory (with volunteers incentivised to take risks to generate profit)3 has raised the possibility of a ‘winner effect’, in which success and rising testosterone levels go hand in hand, one driving the other. So during individual winning streaks, and more broadly during bubbles (i.e. market-wide winning streaks), traders make above average profits. Success is associated with increased testosterone levels which, in turn, increase risk appetite and the size of individual trades.

However, at some point, traders become over-confident, placing bets of ever-increasing sizes, with increasingly adverse risk‒reward trade-offs, until eventually things go wrong and they suffer significant losses (an inevitable consequence of what is often referred to as prior ‘irrational exuberance’) (see Figure). During financial crises and market crashes, the same traders suffer losses on a scale greater than anything they could have imagined.

WHEN STRESS ENTERS THE SCENE

At this point, life becomes stressful. Traders face the prospect of losing their job, personal bankruptcy and the social stigma of having to curtail the lavish lifestyle that accompanied their increased wealth, resulting from the prior bubble.

I can already hear the cries of ‘Serves them right!’ ‘It wasn’t even their own money they were taking risks with…’ and ‘We have all ended up paying for their errant ways.’ However, perhaps we should care about traders who are stressed, because emerging evidence suggests that a stressed trader is not what you need when the going gets tough.

Chronic stress has both physical and psychological consequences. The latter include impaired attentional control and behavioural flexibility. Raised cortisol also promotes anxiety, a selective recall of disturbing memories, a tendency to find danger where none exists, and even depression and learned helplessness.

It doesn’t take much of a conceptual leap, therefore, to imagine just how chronically elevated cortisol levels might have an impact on a trader’s behaviour. Indeed, data collected from traders in the City of London during periods of high market volatility and uncertainty show a remarkable correlation between indices of market volatility and traders’ endogenous cortisol levels.2 Furthermore, in laboratory studies examining the effects of raised cortisol (comparable with the levels observed in the traders) on risk-taking behaviour, even modest hypercortisolism was found to significantly change risk preferences, with a demonstrable increase in risk aversion.4

So, it seems that existing economic/finance models in which risk preferences are a fixed trait (in much the same way as eye or hair colour) may not hold true after all. Instead, the behaviour of traders is susceptible to external influences that interact with the body’s systems (including its endocrinology), and therein bring about a chain of unanticipated events.

Once a market bubble bursts and a bear market ensues, increasing uncertainty and volatility raise levels of stress amongst traders. If sustained, the resultant elevated cortisol levels promote risk aversion and the ‘irrational pessimism’ that can push a bear market in to a crash – at which point it isn’t only the traders who are stressed!