Paul Kelly was an endocrinologist of international renown.

After his PhD in endocrinology and reproductive physiology from the University of Wisconsin (WI, USA), in 1972, Paul went to Canada to undertake his postdoctoral training in the laboratories of the well-known Professors Henry Friesen (McGill University, Montréal, and University of Manitoba, Winnipeg) and Fernand Labrie (Laval University, Québec City). 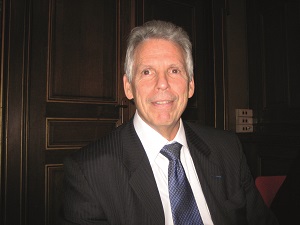 He then decided to move to France, specifically to the Faculty of Medicine Necker at the University of Paris Descartes, where he created Inserm Unit 344. He led the unit for 15 years as a Senior Director of Research, followed by an appointment as a university hospital professor.

During this time, Paul played a key role in a project to bring together several laboratories on the Necker campus and, in 2007, he succeeded in creating the Research Center for Growth and Signalling (Inserm Unit 845), which he directed until 2010. This has become a department of the present Institute Necker Enfants Malades (Inserm Unit 1151), of which Paul was a member until 2014 as an Emeritus Professor.

Besides science and research, Paul also contributed significantly to the evolution of the Necker campus at the turn of the 20th century. He was Director of the Institut Fédératif de Recherches between 2000 and 2010.

Paul was a visionary; his actions stimulated the emergence of several core technological facilities. Despite numerous obstacles, Paul persevered in his aim, and today the entire Necker research community is indebted to him.

During his career, Paul made fundamental contributions to the field of research on the hormone prolactin. After making significant advances in the actions of prolactin at Laval University, Paul and his team at McGill University made an internationally acclaimed breakthrough by cloning the prolactin receptor (Cell 1988 53 69–77). This result constituted the basis of the work that he continued at the Faculty of Medicine Necker, to elucidate the molecular mechanisms of action of prolactin and, using a prolactin receptor-deficient mouse model, the complex pathophysiology of this pleiotropic hormone.

Paul was strongly involved in editorial activities, and served as Editor of numerous leading journals in the field of endocrinology. Together with E-E Baulieu, Paul edited the famous textbook Hormones: From Molecules to Disease (1990). He was Chairman for Basic Research at the 82nd Annual Meeting of the Endocrine Society in 2000 and chaired the Gordon Research Conference on Prolactin in 2002.

Paul was a member of nine distinguished societies. He published over 400 peer-reviewed articles and was a recipient of several prestigious honours and awards, including the Chair in Molecular Endocrinology of the Fondation de France, the Gerald D Aurbach Award and the French Ordre National du Mérite.

During his exceptional scientific career, Paul remained humble. Accessible and always turned towards others, he was instrumental in the early careers of a great number of young scientists who, today, are infinitely grateful. He was also an exceptional teacher.

Henry Friesen says, ‘I recall an earlier period both at McGill and the University of Manitoba when the terra incognito of the domains of prolactin and growth hormone receptors were beginning to be explored. And of course Paul Kelly, Bob Shiu, and Michael Waters were pioneers and trailblazers in the journey of discovery in my lab at that time. But it was Paul Kelly, with his team, who pursued the scientific quest using ever more sophisticated tools to define the mysteries and mechanisms of the prolactin receptor–ligand hormone interactions and the post receptor signals. It was a monumental achievement, made even more heroic as the advances and progress occurred despite the intrusive health challenges he faced over an extended period. Endocrinology has lost a leader and a creative contributor whose life is a shining example of the triumph of the resilience of the human spirit in the face of crippling adversity.’

We will remember Paul Kelly as a leading scientist in his field, a mentor, a federator and, perhaps above all, a man of incomparable kindness and rare humanism.