Vivian James was an eminent endocrinologist who contributed much to our field.

Professor James was one of the longest-standing members of the Society for Endocrinology, joining in 1961 and maintaining his membership for 57 years. He was appointed the Head of Chemical Pathology at St Mary’s Hospital in London in 1973 and he held that position until his retirement. His qualifications included a BSc, ARIC, PhD, FRSC, MRCPath, DSc and FRCPath, and he was particularly recognised for his expertise on steroid hormones. 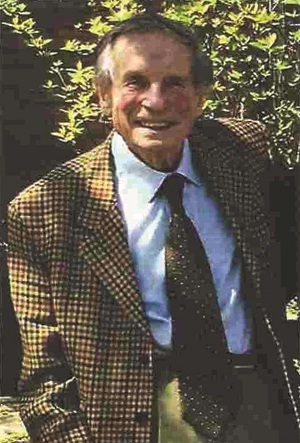 Vivian started his working life as a technical assistant in a metallurgical laboratory, a vocation that did not meet with his expectations. With the outbreak of World War II, Vivian decided to ‘do his bit’ and was accepted into the RAF, even though he was under 18. Following a short course in aeronautical engineering at the University of Cambridge, and then pilot training, Vivian spent his active service flying Avro Lancaster planes as transporters in the Middle East.

In 1947, Vivian was demobbed, and he then read chemistry at University College London, graduating with special honours in 1950. After a couple of years in the pharmaceutical industry, Vivian was appointed to the scientific staff of the Medical Research Council (MRC), where he carried out research on the synthesis of steroid hormones. During that period he completed the work for a PhD. Vivian then competed for a fellowship awarded by the Centre Nationale de la Recherche Scientifique, enabling him to study endocrine biochemistry at the École de Médecine in Paris, France.

In 1956, Vivian was appointed to a lectureship in chemical pathology at St Mary’s Hospital Medical School, the place where he spent the rest of his career. He rose to the challenge, setting up a highly successful steroid research unit that was almost entirely supported by outside funding, including the MRC, the CRC and various pharmaceutical firms. Under his wing, the department also provided a supra-regional assay service for steroid hormones, of which Vivian was Director when it was initiated in 1968. In 1967, Vivian was awarded a Chair in chemical endocrinology and this was followed in 1973 by a Chair in chemical pathology and also the headship of the department, a remarkable achievement, no doubt helped by Vivian earning the trust and support of senior staff qualified in medicine.

Vivian’s intellect, knowledge and impeccable professional courtesy resulted in him undertaking key roles on various committees, too many to all be named here, but including those connected with aspects of the NHS, as well as the Biochemical Society and the Society for Endocrinology. Vivian also took on the position of President of the Endocrine Section of the Royal Society of Medicine.

Additionally, he participated on various editorial boards and he was the founding Editor of the highly successful journal Endocrine-Related Cancer. Further roles within the Society for Endocrinology included Treasurer and General Secretary. He was instrumental in the establishment of Bioscientifica Ltd and in shaping the Society’s investment portfolio, ensuring that the Society received external professional financial advice. Vivian also chaired a working group which subsequently founded the European Federation of Endocrine Societies (the forerunner of the European Society of Endocrinology), where he was the first Federation Secretary General.

There were obviously many achievements in Vivian’s career, but he considered one highlight to be at an endocrine conference in Italy. He had decided, rather bravely, to present his paper in Italian, a language he had only learnt later in his working life. His presentation was part of a parallel session and few delegates had turned up to listen, he presumed because his talk was expected to be in English. Fortuitously, the conference organisers had arranged for presentations from that lecture theatre to be broadcast in other areas of the conference centre. As his presentation progressed, more and more Italian delegates turned up to listen to this Englishman presenting science in their native language. When he finished his presentation, the lecture theatre was packed and the applause was resounding!

Vivian also trained several endocrinologists from abroad and, for this, he was awarded the Fiorini d’Oro (Golden Florin) by the City of Florence, an honour which is normally reserved exclusively for Italians. He was also elected an honorary member of the Italian Endocrine Society.

With retirement, Vivian held an emeritus position at St Mary’s, the Medical School by then having become part of Imperial College London. His expertise in steroid biochemistry and analysis continued to serve him well as, in retirement, he chose to act as an expert witness in cases connected with doping in sport, both nationally and internationally. He attracted the attention of UK Sport, which asked him to form and chair a scientific committee inquiring into the contentious problem concerning the anabolic steroid nandrolone, with a key review being issued in January 2000 and a progress report in February 2003. His last three research publications were in 2009, concerning aspects of the oral contraceptive norethisterone in relation to the nandrolone sport test.

Vivian James touched numerous lives, and many of those who knew him greatly respected him, not only as a scientist, but also as a sincere, kind and helpful man.