Exercise and endocrinology in advanced age with a focus on testosterone

Ageing is experienced by us all, yet we age at a non-uniform rate. Our physiological and endocrinological age may not be reflected by our chronological age, or the number of candles on our birthday cake.

AGEING WELL: WHY IT MATTERS

Recent history has seen an explosion in human longevity in the western world. In less than 200 years, the UK’s average lifespan has doubled from 40 to 80 years of age, a trend which has been mirrored in Western Europe and Scandinavia. These numbers would be unimaginable to prior generations and, as technological and medical research advances, we question how much further human lifespan can increase.

Whilst lifespan has increased over several decades, health span (the phase of life without disability and free from serious chronic diseases) has not. The difference between health span and lifespan is not merely one of semantics, but has profound implications for health services worldwide.

As an example, the UN estimated that 3,376,000 people in the UK were over 80 in 2017, which will rise to 7,506,000 by 2050. If these individuals are healthy, they will continue the activities of daily life unassisted. However, if these octogenarians, nonagenarians and centenarians pursue a sedentary life, they may have a level of functional ability (the ability to go about activities of daily living) which is too low to maintain independence (see Figure).

The repercussion of this is institutionalisation, and potentially nursing care. The average cost of a residential care home with nursing is approximately £40,000 per person per annum in the UK. On an individual basis this is extremely costly, but on a national level this could be crippling. 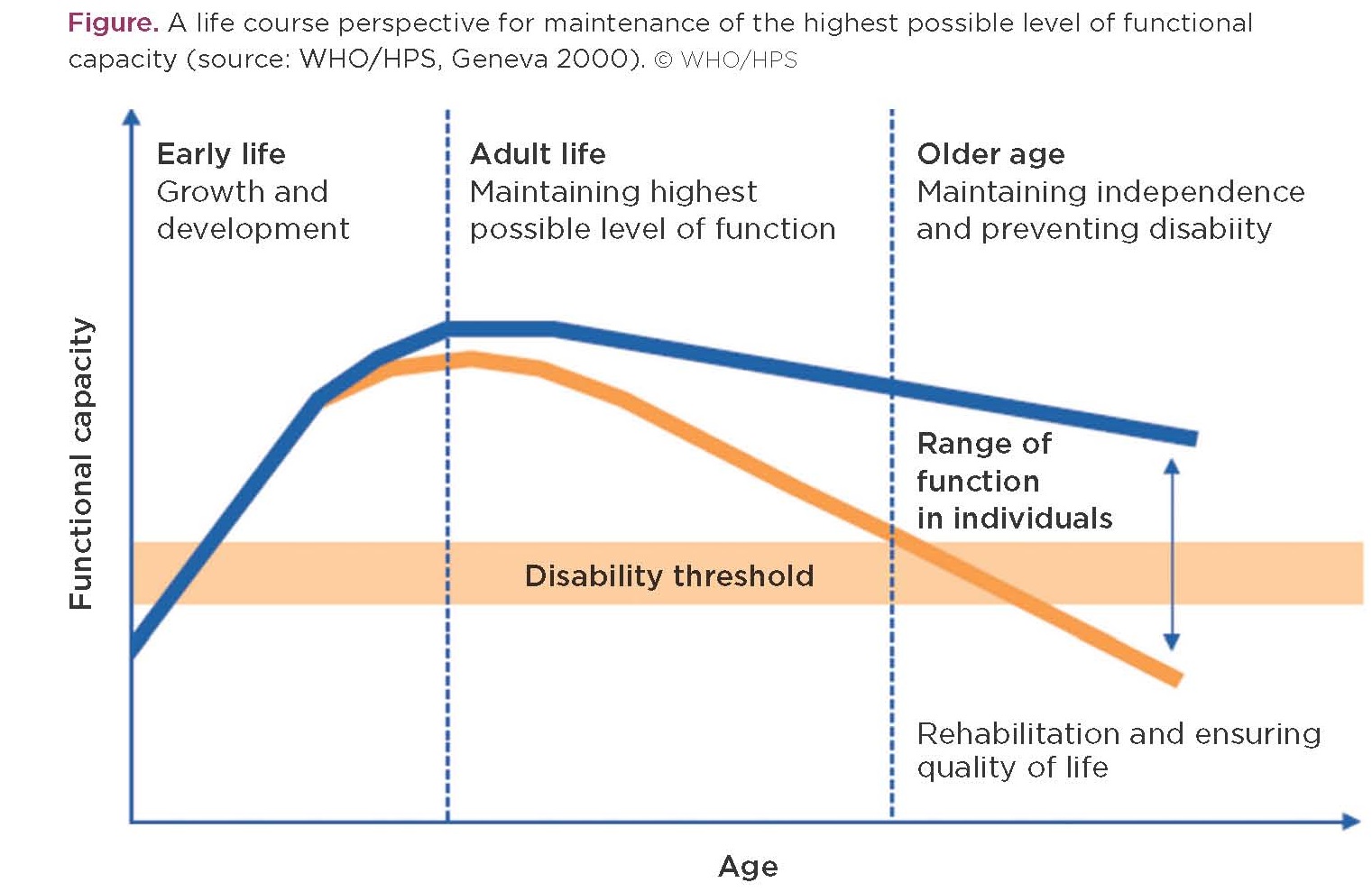 Biological ageing is characterised by a progressive loss of physical function and an increased risk of developing various common diseases, including cardiovascular disease, type 2 diabetes and many cancers.1 Yet, heterogeneity exists in many hallmarks of ageing, including telomere length,2 the hormonal milieu3–5 and physical function.6 That ageing occurs at a non-uniform rate provides hope, suggesting there are modifiable factors that can increase lifespan and health span alike. We can observe this in everyday life, as some nonagenarians appear to have the physiology of a sexagenarian, and some sexagenarians are already frail, and exhibit the body of someone far older than their chronological age.

EXERCISE AS A COUNTERMEASURE TO AGEING

One such strategy is physical activity and/or exercise. This has been proposed as a countermeasure to biological ageing, whereby physically active humans are phenotypically younger than sedentary counterparts, or where individuals display a ‘younger’ phenotype after exercise training.9–14 If we take the classic hallmarks of ageing as reduced physical functions, it is clear that exercise can increase muscle mass and strength, reduce frailty and increase cardiorespiratory fitness.15–17

Much like circadian rhythms, rhythms of the menstrual cycle and seasonal variations in hormones, hormonal concentrations vary throughout the life cycle. Indeed, one programmed theory of ageing posits that changing hormonal secretion over our lifetime is causative in the ageing process.

For example, testosterone peaks at puberty in males and declines gradually from the fourth decade of life onwards.18 As testosterone is implicated in the maintenance of healthy metabolism and muscle and bone health, amongst other factors, this decline of the primary male sex hormone has been suggested as a reason for age-related reduction in physical functioning. As a result, testosterone supplementation has garnered interest for its rejuvenative potential.19 This can also be applied to growth hormone (GH) and other ‘anabolic’ hormones.20

This poses the obvious question, if we reverse the tide of endocrine ageing through exogenous supplementation of these hormones, can we retard human ageing? Storer and colleagues demonstrated that 3 years of testosterone supplementation prevents the age-associated decline in muscle mass and function.19 This has been supported by Atkinson et al., who observed that 6 months of testosterone supplementation mitigates age-related loss in muscle (sarcopenia).21 Therefore, if we avoid endocrine ageing, some aspects of whole-body human ageing can be augmented. However, there are many issues associated with exogenous administration of testosterone, particularly cardiovascular events.22

EXERCISE AS A COUNTERMEASURE TO ENDOCRINE AGEING

As previously mentioned, hormones exhibit a common pattern over the life course. In females, menopause represents the major turning point in the hormonal milieu. Yet, in males the decline in ostensibly anabolic hormones is more gradual.

In the normal population, a progressive fall in GH secretion occurs with increasing age and is reflected in a parallel fall in circulating insulin-like growth factor-I (IGF-I). This fall is termed the ‘somatopause’,20 whilst the age-related reduction in testosterone is termed the ‘andropause’.23

It is of interest to know whether exercise can be prescribed as a first line treatment for falling ‘anabolic’ hormones. Several research groups have sought to answer this question, with varying results. For example, Maass et al. observed no change in GH or IGF-I following 3 months of aerobic training in older adults24, and Arnarson et al. reported a reduction in serum IGF-I following 12 weeks of resistance training in elderly adults.25 However, we have previously reported that male masters athletes (competitive athletes over 60 years of age) exhibit greater IGF-I concentrations compared with lifelong sedentary counterparts. Moreover, after high intensity interval training (HIIT), both groups experienced an increase in IGF-I (to a larger extent in the previously sedentary group).26 Similarly, we have observed this increase in IGF-I (and GH) in middle-aged individuals following an intensive training period.27 Therefore, it seems likely that a lifetime of exercise, and short term exercise training of sufficient intensity, can maintain somatotrophic hormones compared with sedentariness.

However, an interesting preliminary finding was that more of the sedentary individuals were classed as biochemically hypogonadal (clinically low total testosterone) than was the case for the masters athletes.29 This may suggest that lifelong exercise does not increase a group mean testosterone, but may protect against clinically low testosterone (possibly via avoidance of obesity and the effects of excess adiposity). When we subjected these individuals to HIIT, both the previously sedentary group and the masters athletes increased free testosterone (purportedly available for tissue uptake), but not total testosterone.30,31 Thus, HIIT appears to have the most promise with regards to increasing basal testosterone in the short term, yet much more research is required to confirm this.

CAN EXERCISE REVERSE THE TIDE OF (ENDOCRINE) AGEING?

This depends how we define ageing. If ageing is merely the passage of time, then probably not. However, if human ageing is associated with physical inactivity (which at present it is32), then the answer is probably yes. Active older individuals, particularly masters athletes, have a greater physiological capacity than sedentary older adults.33

With a focus on testosterone, whether exercise can prevent or reverse the andropause is unclear. However, I must stress that, despite most of my research into the endocrinology of ageing and exercise being focused on testosterone, this is only one factor in the hormonal milieu, and exercise is efficacious at improving other hormonal variables associated with successful ageing.3,26,27

At present, exercise is probably our best countermeasure (in terms of avoidance of side-effects) to endocrine ageing and whole-body ageing.

CHALLENGES AND SCOPE FOR FUTURE RESEARCH

There is still so much we do not know about the influence of exercise on ageing endocrinology. The complexity of the endocrine system makes this area of study simultaneously fascinating and challenging. One issue in interpreting findings concerning testosterone and exercise is that there are several upstream and downstream intermediary hormones implicated in the hypothalamic-pituitary-gonadal axis. Moreover, measurement of sex hormone-binding globulin is required (if equilibrium dialysis is unavailable) to measure free testosterone (the hormone fraction available for tissue uptake). Likewise, measurement of tissue androgen receptor number is needed for an understanding of whether testosterone can exert an effect  at the tissue level.

Advances in physiological research methodologies, particularly the popularisation of the biopsy technique and high sensitivity detection methods, will hopefully shed light on these topics in years to come.