We are in an Olympic and Paralympic year, which brings sport to the forefront of life for around 30 exciting days for sport lovers. There are also always controversies. One of the issues currently is how to define hyperandrogenism in female athletes, in particular regarding women with differences of sex development (DSD). 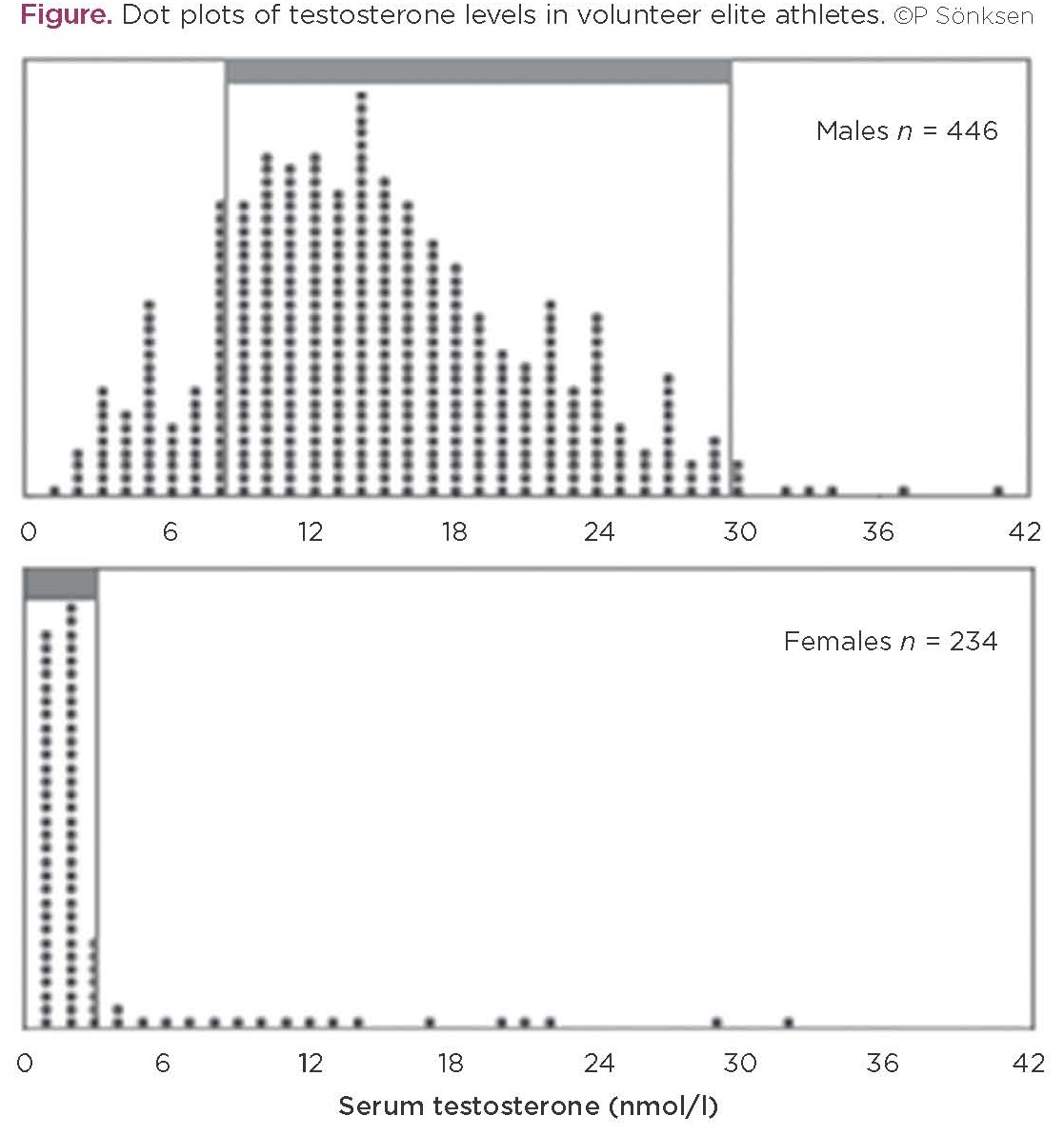 As endocrinologists, we know this is not a straightforward issue for women with DSD. As part of a multi-national European research project, aimed to develop a test to detect growth hormone misuse (GH-20001), we collected blood samples from 813 volunteer elite athletes from 4 countries and 15 sporting disciplines. At the end of the project, endocrine profiles were analysed for 693 of these which had enough serum remaining to obtain the profile (454 men and 239 women).2,3 Testosterone levels showed some surprising results in both men and women (Figure).

There was a complete overlap between men and women, although the mean values were clearly separate. Of 446 men, 74 (16.5%) had a value below 8.4nmol/l (the lower limit of the normal reference range), while 32 of 234 women (13.7%) had a testosterone level >2.7nmol/l (the upper limit of the normal reference range). Those women who had a high testosterone were taller and thinner and had a lower oestradiol level than those with a normal testosterone measurement.

WOMEN WITH DSD IN ELITE SPORT

It has been shown previously that women with DSD are over-represented in elite sport: at 1:5044 and 1:421 at Olympic Games.5,6 In these instances, DSD was established genetically, whereas in the GH-2000 series (with the very high prevalence of 1:23), the diagnosis was assumed on the basis of the elevated testosterone level. It is also interesting to note that elite athletes with (presumed) AIS were competing in rowing and swimming as well as in track and field, where all the recent publicity has occurred.

This over-representation of women with DSD in sport and its effect on the so-called ‘level playing field’ is one of the driving forces behind World Athletics (formerly the IAAF) introducing eligibility criteria that restrict access to certain events to women with testosterone levels below 5nmol/l.

There is good evidence that exogenous testosterone (and anabolic steroids) is a performance-enhancing drug in women,7,8 but this is not the same as showing that naturally occurring endogenous testosterone production (as reflected by serum testosterone concentration) in any way determines performance in female athletes. Consultants to World Athletics have exhaustively dredged data from World Athletic Championships looking for correlations between blood testosterone and performance, and have concluded that there is a relationship – but the data are not convincing to me and many others.9,10 They were, however, enough to convince two of the three CAS (Court for Arbitration in Sport) judges to allow World Athletics to introduce (yet again) rules discriminating against all the so-called ‘hyperandrogenic’ female athletes, irrespective of diagnosis.

This is grossly unfair, since the largest group of women disenfranchised by this rule are those with complete AIS, who have a defect in the testosterone receptor and cannot respond to any level of testosterone. Their overrepresentation in elite sport has been attributed to other genes on the Y chromosome that affect characteristics which could themselves affect sporting performance, such as height and lean body mass.5

Hopefully, in time, there will be more balanced judgements but, until then, we may not be seeing some talented athletes during the Games in Tokyo 2020.