The endocrine system: a friend in dark places?

For 69 days, 33 men were trapped more than 2000 feet underground in a collapsed mine near Copiapó, Chile. A huge and successful rescue effort was launched, and both the miners and rescuers were rightly praised for their tenacity and endurance. I would like, however, to consider the contribution of an unsung hero: the endocrine system.

Being trapped in a hot, dark, confined space with very limited supplies is an extremely stressful situation, both physiologically and psychologically. There are various endocrine mechanisms that respond to stress in an attempt to limit the damage. One of the best characterised of these is the release of cortisol. Stimuli such as trauma, decreased oxygen, pain, fright and starvation, all of which were features of the miners’ experience at various points, lead to an increase in the secretion of cortisol from the adrenal cortex. By stimulating gluconeogenesis in the liver, catabolism of triacylglycerol in adipose tissue, and protein catabolism, the cortisol helps to maximise energy supply to the body’s cells and ensure that fuel for the brain is prioritised.

Cortisol was not the only hormone active in the mine. The temperature  was high (30°C) and the water supply was limited. The miners’ restricted fluid intake would have led to the release of anti-diuretic hormone (ADH) from the posterior pituitary and aldosterone from the adrenals. Both hormones prevent water loss and, in addition, ADH induces vasoconstriction to maintain adequate tissue perfusion despite a decreased circulating volume. 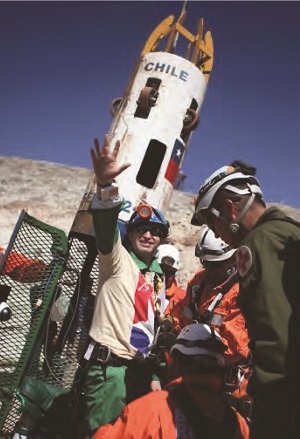 However, the endocrine response may not have been entirely beneficial. Chronically elevated cortisol, combined with extended inactivity in cramped conditions, would result in muscle atrophy and osteoporosis: exercise advice from NASA was sought.

Cortisol’s suppressive effect on the immune system was also a risk, as conditions were ideal for the spread of infection. One of the men suffered pneumonia, several had severe dental problems and many suffered skin complaints. It is conceivable that elevated cortisol made these infections worse, as has been demonstrated in people with depression, which is also characterised by high cortisol.

As well as being a very stressful place, the collapsed mine was also very dark. The body requires energy from the UV component of sunlight to convert cholesterol into vitamin D. Vitamin D is then converted into active 1,25-dihydroxycholecalciferol which maintains calcium and phosphate levels. In the mine there was no sunlight at all – to receive a dose of UV radiation equivalent to 1 minute of sunlight, the miners would have had to sit under a fluorescent lamp for 8 hours. Vitamin D deficiency, in turn, increased the risk of osteomalacia.

Low calcium can have other, potentially lethal, effects too – including cell hyperexcitability and muscle spasm. Luckily, the endocrine system can counter this by releasing parathyroid hormone, returning serum calcium back to acceptable levels. This solution, however, acts as both friend and foe: the calcium is derived from enhanced bone osteoclastic activity, compounding the bone weakening effect of elevated cortisol and vitamin D deficiency.

So, in the end, were the miners helped or hindered by their endocrine systems? This essay has tried to show how the miners would almost certainly have died were it not for their endocrine systems. It is also true that some endocrinological effects were not beneficial and may even have endangered the miners. Is this surprising? While the fantastically complex endocrine system has evolved in response to various environmental pressures, it is unlikely that these included subterranean incarceration! We should also bear in mind what Shakespeare’s Othello would have called ‘the ocular proof’: despite the endocrine system’s shortcomings, all the miners came out alive and remarkably healthy. Thus, as the Chilean government rallied to save the miners, their co-ordinated efforts were being mirrored on a much smaller, but equally important, scale 2000 feet below them, in the endocrine system of each miner.