In 2000, the Society for Endocrinology recommended an audit of adults with congenital adrenal hyperplasia (CAH). This led to a publication in 2010 by the CaHASE consortium reporting poor health outcomes in CAH, and highlighting the need for better glucocorticoid replacement. In 2021, Diurnal Ltd launched Chronocort (brand name Efmody), an oral modified-release hydrocortisone capsule that reproduces the cortisol circadian rhythm to address the unmet need in patients with CAH. This is the story of Chronocort’s development.

In 1999, I attended the Endocrine Society meeting in San Diego, USA, on my way to a sabbatical in Sydney, Australia (I can highly recommend sabbaticals!). At Sheffield, we were doing research on hydrocortisone replacement. On a boat trip in San Diego harbour, I remember talking to a senior sales manager in big pharma and trying to persuade him to invest in a programme for a delayed and sustained release formulation of hydrocortisone that we had modelled to replace the cortisol circadian rhythm.1,2 There were two things I learnt from this boat conversation…

Mind you, it took me five years before I got the message. On return from my sabbatical, at the start of the millennium, I was invited to join the Society for Endocrinology’s Clinical Committee. At my first meeting, Howard Jacobs said, “No one knows how to manage adults with CAH, so should we undertake an audit?” Being the new bug, I put up my hand to lead the audit. We quickly realised there were no standards and little evidence so, instead of an audit, we set up research.

This was the start of the CAH Adult Study Executive (CaHASE), a consortium of academic centres across the UK. The research was funded by the Clinical Endocrinology Trust and supported by the Society for Endocrinology. It proved a highly productive collaboration.3

In 2010, CaHASE published a landmark paper demonstrating poor health outcomes in adults with CAH: in large part due to inadequate glucocorticoid replacement with either too little or excess glucocorticoid exposure.4 The work was confirmed by other cohort studies showing patients with CAH have increased mortality, obesity, osteoporosis and cardiovascular risk factors and reduced fertility.5

Whilst the CaHASE consortium was collecting data on health outcomes in CAH, at Sheffield, we were looking to address the unmet need for a better glucocorticoid replacement. We had determined that we needed a delayed and sustained formulation of hydrocortisone, and the challenge was to identify a technology to make the formulation.

In 2004, Sheffield filed a patent and formed a spinout company: Diurnal Ltd. Diurnal licensed the patent to a company Phoqus. They had a technology based on photocopying that could make a bucket tablet with insoluble sides, which had hydrocortisone in the bottom in a sustained formulation, and a delayed release, eroding top coat. This Chronocort formulation provided proof of concept that delivering the overnight rise in cortisol would improve CAH control.6 However, the Phoqus technology didn’t provide reproducible results and Phoqus went in to administration. The lesson learnt was: it’s not a great idea to combine a new drug idea with a new technology, as you double the risk of failure.

In 2008, Diurnal started its own programme to develop Chronocort using established multi-particulate technology (Figure 1). The first formulations used a delayed and sustained coating of hydrocortisone which, when tested in dexamethasone-suppressed healthy volunteers, gave the correct profile but very poor bioavailability. We then tried only a delayed release layer and found it had both the right profile and the relative bioavailability to immediate release hydrocortisone.7 This Chronocort formulation showed greatly improved biochemical CAH control at phase 2 trial.8

We then undertook the first randomised controlled study of glucocorticoid replacement in patients with CAH. The phase 3 trial failed its primary endpoint because the prespecified endpoint obscured the benefit of Chronocort in the morning and early afternoon. Post-hoc analysis showed that Chronocort improved control of the main CAH biomarker 17-hydroxyprogesterone (17OHP) versus standard therapy (Figure 2). In the Chronocort safety extension study, 80% of patients showed good disease control on a median daily hydrocortisone dose of 20mg, which is an adrenal replacement dose of hydrocortisone.9 Improved biochemical control on Chronocort was associated with the patient-reported benefit of improved energy and restoration of menses with six pregnancies in the 27 women of fertile age and improved sperm count and four partner pregnancies for men with CAH. 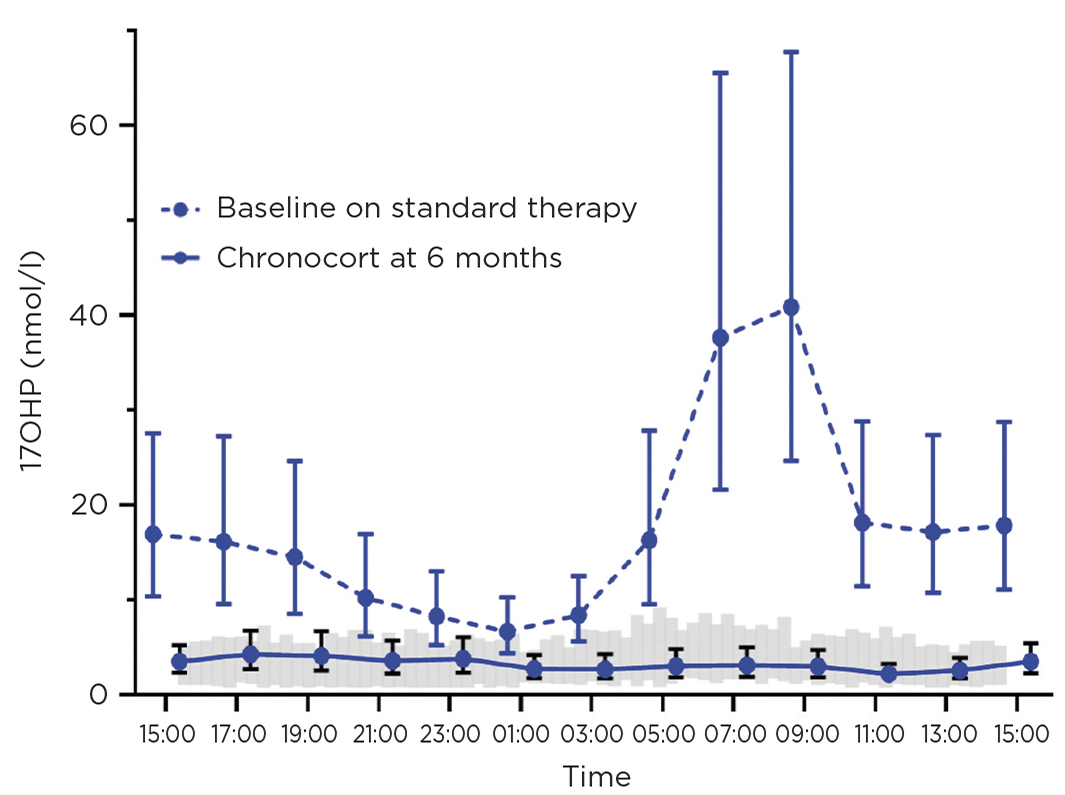 Chronocort was approved by the European Medicines Agency and the Medicines and Healthcare Products Regulatory Agency in 2021, and has been launched in Germany and the UK for the treatment of CAH patients of 12 years and older. Chronocort provides a rational, twice daily ‘toothbrush’ regimen with simplified monitoring, with morning 17OHP reflecting the night-time dose and afternoon 17OHP the morning dose.

The story of Chronocort development is one of peaks and troughs of success and failure. The over-riding lesson I learnt is ‘follow the science and keep going, as success comes from understanding why something doesn’t work’. Chronocort is an important advance in the therapy of CAH which we anticipate will improve the long term health outcomes of patients with this disease.

REPLACEMENT AND THERAPEUTIC GLUCOCORTICOIDS: TIME FOR A CHANGE
Top
TAKOTSUBO SYNDROME: THE ENDOCRINOLOGY OF CARDIOLOGY