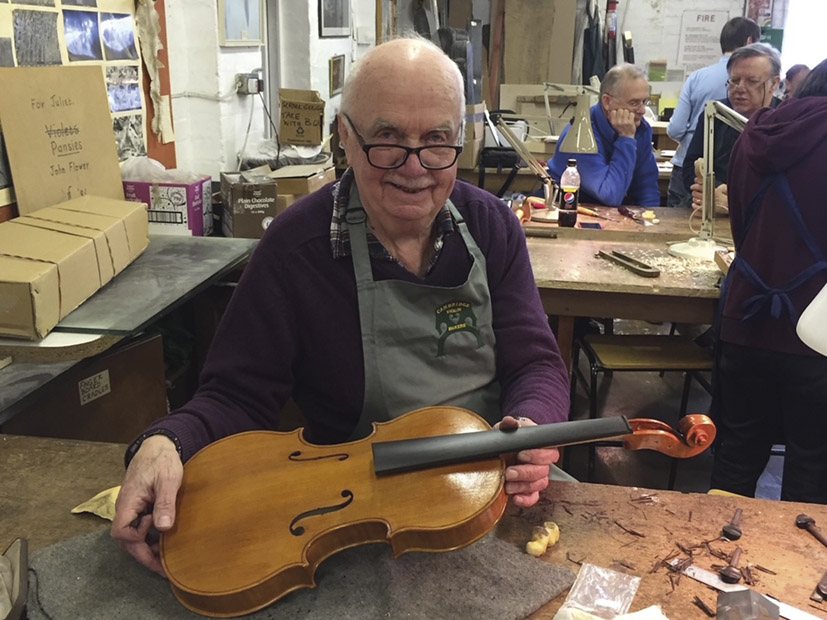 Few who knew him would not agree that Gavin Vinson was one of the truly colourful characters in British endocrinology over the last half century. Many will recall his contributions to Society meetings, not only in the lecture theatre, but also in providing the musical entertainment at our receptions, and on the dance floor after conference dinners.

Sadly, Gavin died earlier this year, after a long illness. We felt it important for members of the Society to remember this extraordinary man who strongly supported and contributed to this organisation.

Although born in Cornwall shortly before the Second World War, Gavin grew up in London during the Blitz. He excelled at school and, although considered for Oxbridge, he chose to read zoology at Sheffield University. He threw himself into university life (as he did into most things) and always retained very fond memories of his time as an undergraduate. Here, through his musical involvement in the orchestra, he met Bronwen, his future wife.

After graduation, he remained at Sheffield to undertake a PhD under the supervision of Ian Chester-Jones, on the comparative biology of the adrenal cortex and its function. This was a highly productive period with a dozen papers coming from his PhD alone (mostly published in Journal of Endocrinology). It set the focus for his lifetime research interest.

His enormous productivity continued as a junior lecturer in Sheffield with his student Barbara Whitehouse, before he and Bronwen grasped the opportunity to move to work with John Phillips in Hong Kong for a year. It was from here that, in 1967, he was recruited by Dennis Lacey to take a junior lectureship in zoology at Barts in London, so beginning a long-lasting relationship with this institution in its various manifestations.

Gavin maintained his research productivity and rose through the academic ranks, joining the Department of Biochemistry in 1980, where he became Professor of Biochemistry and Head of Department in 1985. The storm clouds were gathering over the rather tranquil ivory towers of Charterhouse Square by this time. In 1989, the preclinical schools of Barts and The London Medical Colleges were merged and moved to the Queen Mary and Westfield College campus in Mile End. This was a precursor to the complete merger of the two medical schools and their merger with Queen Mary in 1995. Gavin remained as Head of Biochemistry and became Dean of the Faculty of Basic Medical Sciences in 1994. One would be correct in thinking that this was a very difficult and highly charged time, as the individualities of three very distinct institutions were blended into one. The fact that, today, these conflicts are history is in some part due to Gavin’s leadership.

Despite these difficult times, the research productivity of the Vinson lab persisted, with the support of Joy Hinson, Pete Raven, Stuart Barker, Robert Abayasekara, John Puddefoot and many others. The focus remained on adrenal steroidogenesis, and the group was at the forefront in describing the importance of adrenocortical blood flow in the regulation of this process, as well as aspects of the roles of adrenocorticotrophin, angiotensin and other peptides in adrenal function.

Gavin had always been interested in music and had become a highly accomplished jazz and classical pianist. Not infrequently, one might be enjoying a beer or a meal with Gavin in an establishment with live jazz, and he would quietly go up to the pianist, exchange a few words with them and replace them on the stool. What followed was usually a fantastic jamming session that had everyone highly entertained. In retirement, Gavin took up making stringed instruments from their basic components. He completed a formal training in this skill and completed a viola (as shown in the photograph) and, most recently, a cello – a present for his daughter.

Gavin was a highly talented man whose science was driven by curiosity, a talented musician and a keen linguist, who supported our Society and, in particular, the careers of young endocrinologists. He leaves his wife, Bronwen, his two daughters, one son and five grandchildren, and will be missed by many former students, technicians, researchers and colleagues.

CREATING A BETTER FUTURE FOR ENDOCRINOLOGY: A JOINT EFFORT