Induction of spermatogenesis in men with gonadotrophin deficiency 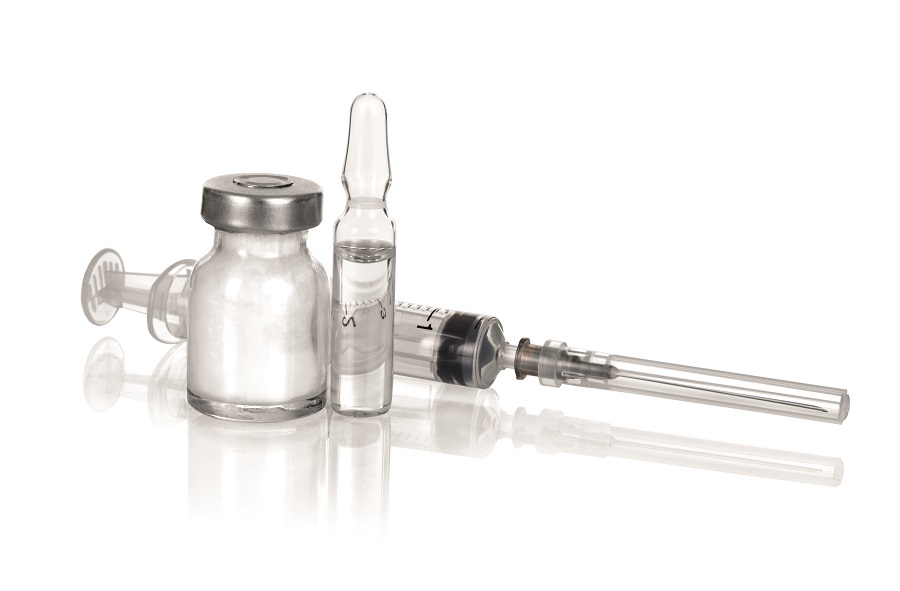 Infertility affects approximately 15% of couples, and male factors contribute to roughly half of cases. Advances in assisted reproductive technologies (ARTs) now provide men with primary (testicular) infertility with treatment options. Notably, secondary infertility is one of the few forms of infertility that can be treated hormonally. This brief overview examines the induction of spermatogenesis in men with gonadotrophin deficiency.

Whereas females have already achieved their lifetime supply of oocytes before birth, males require three distinct phases of testicular maturation to develop and sustain spermatogenesis. The first wave of testicular development begins in utero, with placental human chorionic gonadotrophin (hCG)-induced testosterone secretion (from 7 weeks of gestation). This is followed by gonadotrophin-releasing hormone-stimulated pituitary LH and FSH secretion during ‘minipuberty’ (during the first 4–6 months of life). It is completed in adolescence with the onset of puberty.

The minipuberty is a critical event for future fertility. This is a proliferative period and serum hormones reach near-adult levels. Notably, while erections may be noted on nappy changing, spermatogenesis does not occur at this point, as Sertoli cells do not express the androgen receptor until much later (around 5 years of age).

Males with absent minipuberty (i.e. in Kallmann syndrome or combined pituitary hormone deficiency) are characterised by 50% prevalence of maldescended testes (cryptorchidism), with or without micropenis, and these patients typically do not have any subsequent spontaneous pubertal development in adolescence.

Men with deficient LH and FSH secretion – hypogonadotrophic hypogonadism – have a hormonally treatable form of infertility. This, uniquely, can potentially be addressed solely in the endocrine clinic. However, it is good practice to engage with local fertility services at an early stage, in order to identify and address possible female partner subfertility, as well as to access ARTs as needed, if gonadotrophin therapy does not achieve optimal results (e.g. in vitro fertilisation (IVF), intracytoplasmic sperm injection (ICSI) or microdissection with testicular sperm extraction (micro-TESE)). Additionally, if treatment is successful, men may wish to cryopreserve sperm (by banking) prior to stopping gonadotrophin therapy.

Even prolonged hCG monotherapy rarely achieves useful spermatogenesis in men with congenital hypogonadotrophic hypogonadism (CHH), so it is pointless deferring FSH therapy until after an arbitrary period of hCG-monotherapy. However, men with HH acquired after completion of puberty (e.g. following treatment of pituitary tumours) have a much better prognosis, and fertility can often be restored with hCG monotherapy. The very short half-life of recombinant LH precludes a clinically useful role in therapeutics. Hence, hCG is used to stimulate Leydig cells, with stable serum testosterone levels achievable through subcutaneous injection two or three times per week.

Should serum oestradiol begin to rise above the male range, the hCG dose will need to be reduced to mitigate the risk of developing gynaecomastia. Treatment should target normal serum testosterone levels in trough blood samples taken just prior to injection, while monitoring haemoglobin/haematocrit and possible gynaecomastia.

If monotherapy is unsuccessful, FSH can be added. It is available in ‘pure’ recombinant form, or isomolar with LH as human menopausal gonadotrophin, with either being suitable for spermatogenesis induction in males. Stable serum FSH levels are achievable through thrice-weekly subcutaneous injection (or new long-acting FSH analogue every 10–14 days).

Urinary-derived gonadotrophins are much cheaper than their recombinant counterparts. Unfortunately, supply for urinary-derived gonadotrophins is becoming ever more precarious, which threatens the provision of spermatogenesis induction in the NHS. It is really important to get more uniform access to these specialist medications that are so important to affected couples.

Approximately 75% (CI 69–81%) of men with hypogonadotrophic hypogonadism will develop sperm in their ejaculate following mono- or combined gonadotrophin therapy. However, men with smaller TV (<4ml) do not have the same outcomes and their treatment requires a different approach. 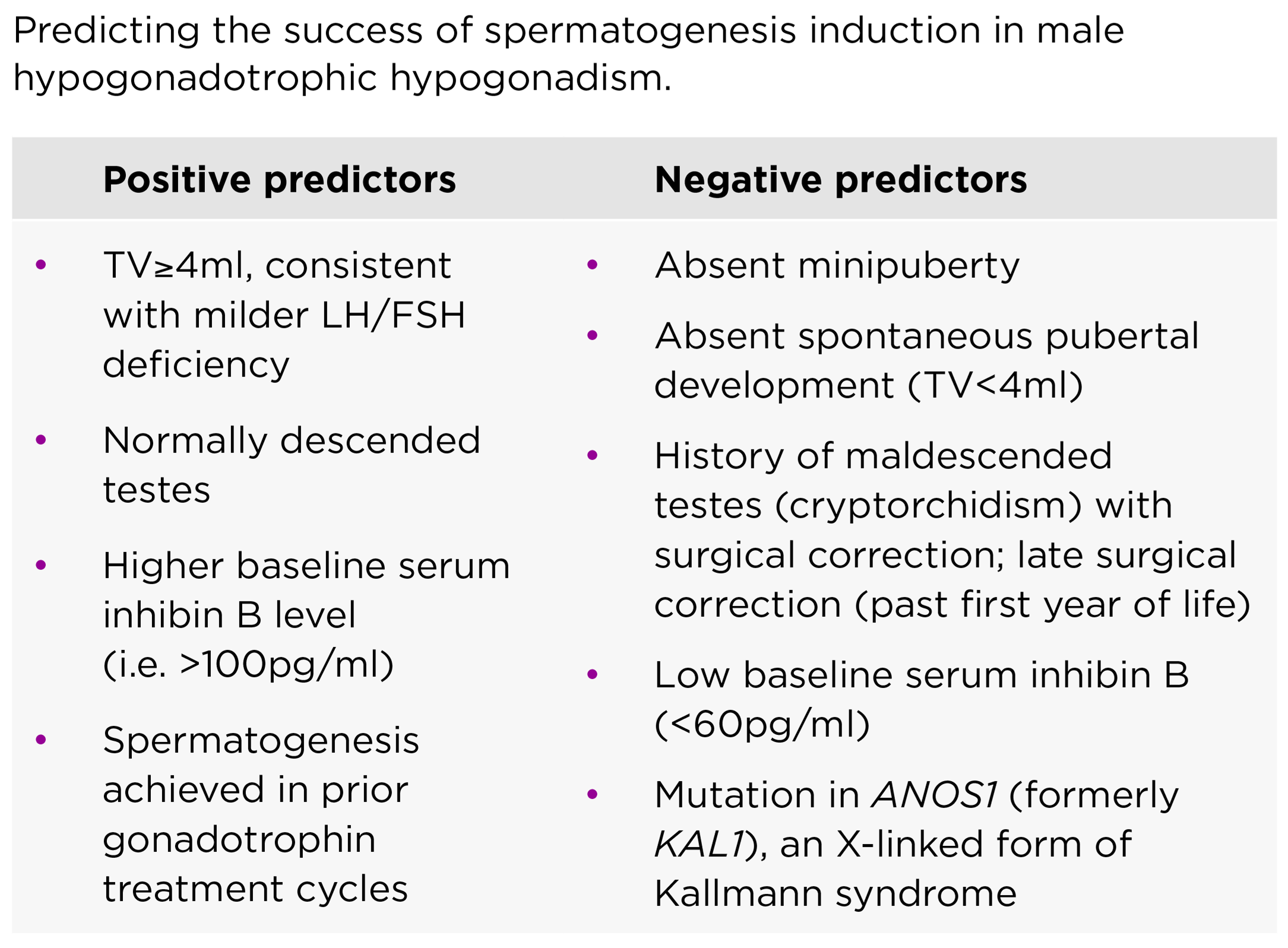 For men with severe LH/FSH deficiency, combined gonadotrophin treatment has been the traditional approach to fertility induction. More recently, a sequential approach has been used in gonadotrophin-deficient men to recreate the events of early puberty and maximise fertility potential.

In this approach, FSH ‘priming’ is achieved by FSH monotherapy for 2–4 months. This recapitulates the rise in FSH early in puberty that is critical for proliferation of Sertoli and germ cells. The addition of hCG induces testosterone secretion and Sertoli cell maturation.

Initial reports show promising results even for those men with prepubertal testes and cryptorchidism (i.e. negative predictors of outcome). However, a large international multicentre trial is needed to definitively determine the optimal treatment (i.e. combined versus sequential gonadotrophin treatment) for the most severely affected men.

In summary, men with hypogonadotrophic hypogonadism have a treatable form of infertility. The majority of men can produce sperm in the ejaculate with appropriate, tailored treatment based on predictors of outcome. It is worthwhile noting that many men will not achieve normal sperm counts by the World Health Organization standard, yet low sperm count does not preclude fertility in these men. Such patients should be appropriately counselled on fertility chances and be monitored by endocrinologists who are experienced in using gonadotrophin regimens.

Obesity in pregnancy: is the next generation at increased risk?
Top
A pregnancy audit for women with Turner syndrome and CAH