Obesity in pregnancy: is the next generation at increased risk?

Congratulations, you’re pregnant! You may now think that it is time to ‘ditch the diet’ and start eating for two. In fact, guidelines from the National Institute for Health and Care Excellence (NICE) recommend only a 200-calorie increase, in the final 3 months of pregnancy.

In addition to the promotion of healthy gestational weight gain, rising levels of obesity worldwide are increasing the pressure to emphasise the importance of entering pregnancy at a healthy weight. Maintaining a healthy diet and weight gain during pregnancy is vital in reducing the immediate adverse consequences to mother and child.

However, there is also evidence to suggest that exposure to obesity in pregnancy can increase a child’s risk of non-communicable disease in adulthood. 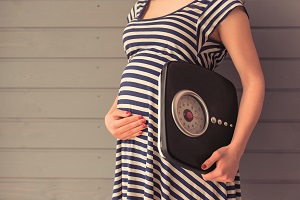 DEVELOPMENTAL ORIGINS OF HEALTH AND DISEASE

Awareness of the concept that your environment in utero and early postnatal life is important for future disease risk came about from observational studies that showed a positive association between geographical areas of high neonatal mortality and ischaemic heart disease in adulthood. It was postulated that this link could be attributed to the poor health of the mother in pregnancy and reduced fetal growth.1

Subsequent studies further investigated and supported these associations using low birth weight as a proxy marker of a poor intrauterine environment.2 As birth weight is only an indirect indicator of maternal and/or fetal health, specific exposures have been investigated which include maternal undernutrition during periods of famine, glucocorticoid exposure due to premature birth and, most recently, maternal over-nutrition and obesity.

FROM UNDERNUTRITION TO OBESITY

Obesity in pregnancy is associated with a plethora of complications in the mother that may include gestational diabetes, pre-eclampsia, inflammation and elevated lipid profiles. It is hypothesised that such an unfavourable environment can alter the molecular, structural and functional phenotype in the developing fetus, resulting in long-lasting changes that increase their risk of later adulthood disease.

A number of human studies have investigated the long term impact of exposure to maternal obesity. An Aberdeen cohort showed that offspring of obese mothers were more likely to die prematurely, and were at increased risk of hospital admission due to a cardiovascular event.3 In two Finnish studies, one showed a 35% increased risk of atrial fibrillation,4 and the other showed the highest mortality rates from coronary heart disease in offspring whose mothers had a higher body mass index during pregnancy.5

While human studies are vital, the prevalence of maternal obesity in these populations is relatively low, considering these mothers were pregnant 50–60 years ago. Frighteningly, the full impact of the current obesity situation is yet to be fully understood. This is where the use of animals is critical in our understanding, as they not only allow us to model human obesity and the impact of certain diets, but also help address mechanistic insight and causality. Furthermore, due to their shorter lifespans, they allow the study of age-associated conditions.

‘Obesity in pregnancy is associated with a plethora of complications in the mother that may include gestational diabetes, pre-eclampsia, inflammation and elevated lipid profiles.’

There are a considerable number of animal models in this field of research, ranging from large species that include sheep to the smaller and more common rodent models. These models act to induce environmental changes in the mother to mimic human obesity and/or a poor diet. However, the type of model varies according to the question posed by the research group.

Those interested in understanding the impact of maternal obesity often feed high fat/high sugar diets prior to conception and throughout pregnancy and lactation.6 This method provides an animal with both an unhealthy diet and a metabolic phenotype similar to that of an obese mother, such that they have raised body weight and fat mass, elevated lipids and insulin resistance.7 Others may wish just to look at the effect of certain diets during pregnancy, or perhaps address the influence a particular diet has on the offspring during certain developmental windows of pregnancy and/or lactation.

The laboratory where I am based utilises a mouse model of maternal diet-induced obesity. The mice become obese through the consumption of sweetened condensed milk and a high fat diet pellet. These females are heavier, fatter and more insulin-resistant.7 A causal link between offspring exposure to maternal obesity and cardiovascular disease has been consistently shown. Offspring of obese mothers have enlarged hearts from weaning, develop pathological left ventricular hypertrophy by 8 weeks of age and have impaired cardiac dysfunction coupled with enhanced activation of sympathetic tone.8,9

The long term goal of using animal models is to be able to uncover mechanistic insights into what it is about the maternal environment that is driving the offspring phenotype. These findings can then be translated back into humans, with the hope of targeted intervention strategies focused on either the mother or the offspring.

Intervention studies in humans and animals are already underway, acting through dietary modification, exercise or pharmacology, in the hope of reducing the offspring’s risk of cardiovascular disease, and improving the health of the mother both during and after pregnancy.