An ageing population: the nature of healthcare and our need to adapt

When the National Health Service was created in 1948, life expectancy at birth in England was 66 years for men and 71 for women. Nearly half the population died before they reached 65. The corresponding figure now is around 14%, with average expectancy around 20 years at age 65. Projections for 2030 are for a 50% increase in the number of over-65s and a 100% increase in over-85s – the fastest growing demographic. English men having their 65th birthday in 2030 can expect to live on average until 88 and women 91.

These compelling figures do have implications for the health and care workforce, dependency ratios (between those in paid employment and those not) and for retirement age, which we mustn’t duck. But instead of a sensationalist narrative driving ageist attitudes through phrases like ‘grey tsunami’ and ‘ticking time-bomb’, ageing isn’t all doom and gloom, but a cause for celebration.

WHY WE SHOULD CELEBRATE

First, this progress represents a victory for society through better nutrition, housing, hygiene, wealth and workplace safety. Secondly, it’s a victory for modern healthcare, with death rates in all age groups from common killers (cancer excepted) all reducing throughout the past 50 years. Thirdly, it means we all have a higher chance of a long and active life. Fourthly, despite prevalent problems such as social isolation, in population studies, most over-75s self-report relatively good health, well-being and happiness – despite media stereotypes of ‘the elderly’ routinely beset by misery. Even the economic catastrophising is debatable. Economies grow, retirement age can increase and those over 65 probably make a net economic contribution through their roles as unpaid carers, grandparents and volunteers, and through spending and continued paid employment.

Although the population over 65 is, if anything, becoming healthier, with a possible reduction or delayed onset of morbidity, ageing inevitably means a higher overall number of older people living in poor health. There are still major inequalities in absolute and healthy life expectancy at 65, with around half of all poor health in older age potentially preventable through lifestyle across the life course.

With increasing age, people live with multiple long term conditions (those over 75 have three or more on average – though not always ‘life-limiting’, explaining the apparent paradox of high self-reported well-being). These, in turn, can lead to prescription of multiple medications, despite the fact that most clinical trials exclude older people with multiple co-morbidities, and that clinical guidelines and pay for performance incentives focus on single conditions. Inappropriate or hazardous polypharmacy can lead to side effects, drug–drug or drug–disease interactions and poor adherence. 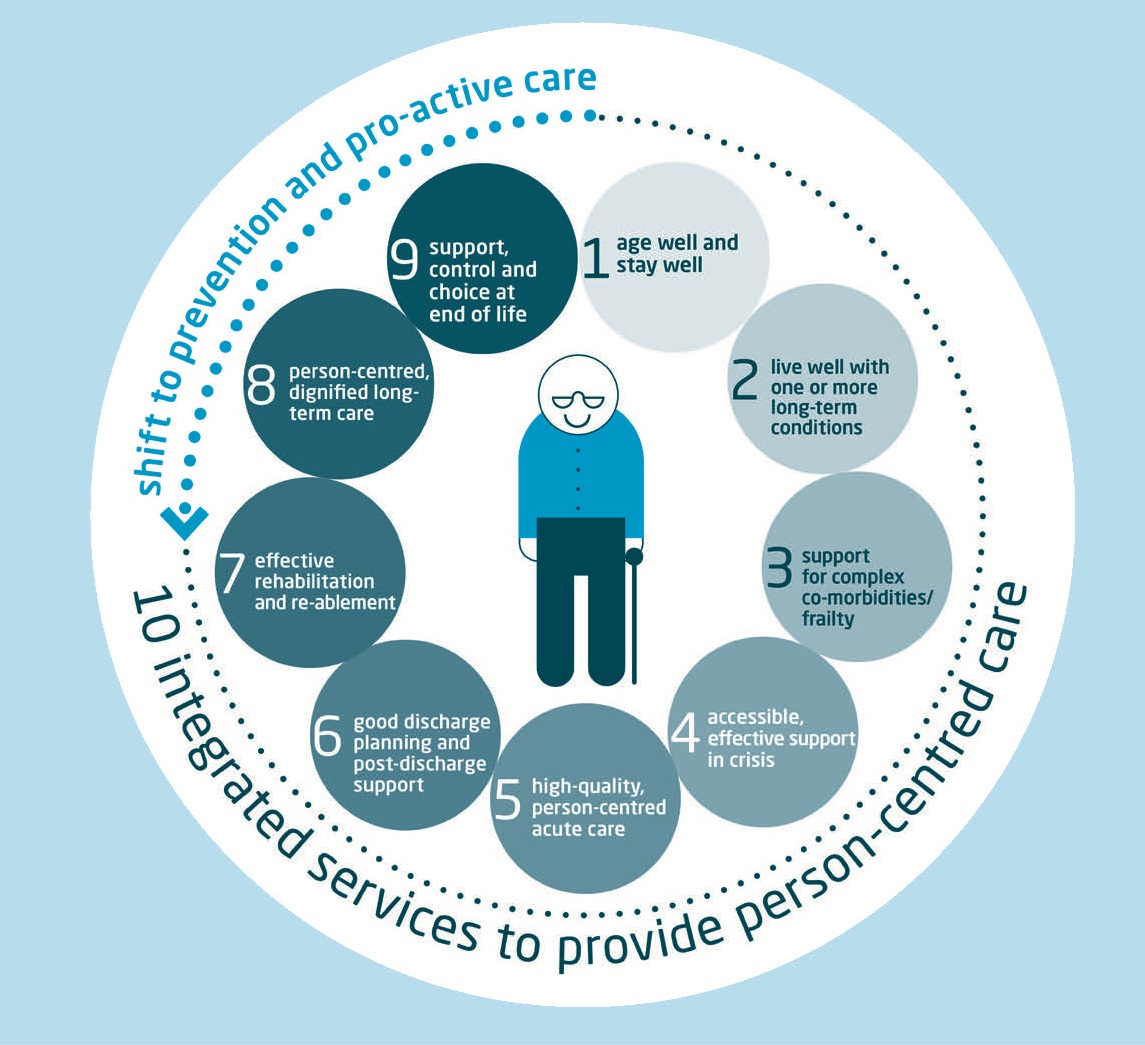 Ten components of care for older people. From Oliver et al. 2014 Making Our Health and Care Systems Fit for an Ageing Population. London: The Kings Fund.

Dementia already affects around 800,000 people in England, with the number projected to double in the next 20 years. Mobility problems, hearing and visual impairment are increasingly prevalent in older age, as is frailty syndrome.

Frailty hasn’t traditionally been discussed in plans and strategies around long term conditions, but it needs to be, as the British Geriatrics Society has set out in the recent ‘Fit for Frailty’ resource. People with frailty tend to fatigue more easily, have slower walking speed, reduced muscle strength and reduced functional reserve. A relatively small event such as infection, drug side effects or metabolic disturbance can cause rapid decompensation in people who are frail. They tend to present to health and care systems with non-textbook symptoms, falls, immobility, incontinence, acute confusion (delirium) and fluctuating disability. Frailty accounts for a big proportion of acute hospital activity, nursing home residents and users of community intermediate care services. But non-geriatricians are poorly trained in its recognition or in the skilled comprehensive geriatric assessment required to address it. All of these problems tend to travel with an older person, even if they are using health services for another reason, but require a change of approach when dealing with them.

With health and care systems under increasing financial strain, we can’t solve pressing problems without addressing the care of older people. They account for proportionately the biggest spend, the biggest activity, the biggest unwarranted variation, the group most likely to suffer from poorly co-ordinated care and at inefficient interfaces and handoffs between agencies. Improve care for older people with complex needs and we can help improve it for all.

But we need radically to change our priorities and approach away from one designed for a population who died far younger or to deal with single conditions or episodic disease. Instead we need a focus on:

Most importantly, our politicians, national and local system and service leaders, educators, regulators, priority setters, research funders and universities, and crucially people training for and entering the caring professions, need to realise that, in the 21st century, older people are no longer a minority – the last to be considered – but are the core customers  of our services.

Care and support for them will be the job of most of us, and we need to make our health and care systems age-proof and fit for purpose. Those graduating in 2015 will have trained with the youngest group of patients and clients or research participants they are ever likely to work with. And older people are ‘us’ or our parents in the future, and our own relatives right now. Even older people don’t like to see themselves as old and tend to distance themselves from ageing, but mass denial won’t help us to achieve the transformation we need in modern services. It’s time to get with the programme.

David Oliver, At the time of writing David Oliver was President of the British Geriatrics Society and Senior Visiting Fellow at The King’s Fund