Increased time spent exercising is positively linked to a reduction in all-cause mortality.1,2 Furthermore, lack of physical activity is a significant risk factor for development of many prevalent non-communicable diseases, ranging from various forms of cancer, type 2 diabetes, cardiovascular disease and hypertension to Alzheimer’s disease and depression.

Physical activity is linked to increased number of healthy years. It has  been proposed that when it comes to reducing the risk of virtually all chronic diseases simultaneously, there is probably no single intervention with a higher therapeutic potential than physical exercise, and this with  few or no adverse side effects.3

Exercise results in a plethora of changes in several different organs, including effects on the cardiovascular system, muscle and bone. This review focuses on exercise-mediated effects in skeletal muscle.

Skeletal muscle is a highly plastic and adaptive organ. Muscle contraction is a physiological stress to the muscle, which responds by remodelling gene expression to adapt to increased functional demands. The well-trained muscle is characterised by changes in contractile proteins and function, and enhanced mitochondrial function and content.4

The trained skeletal muscle is stronger, has higher endurance, and is able to more efficiently utilise and switch between different nutrient sources. While exercise-induced muscle growth is perhaps a more intuitively appreciated response to muscle use, it is the exercise-mediated changes in the capacity for substrate metabolism and insulin sensitivity that probably have the more important implications for overall health. 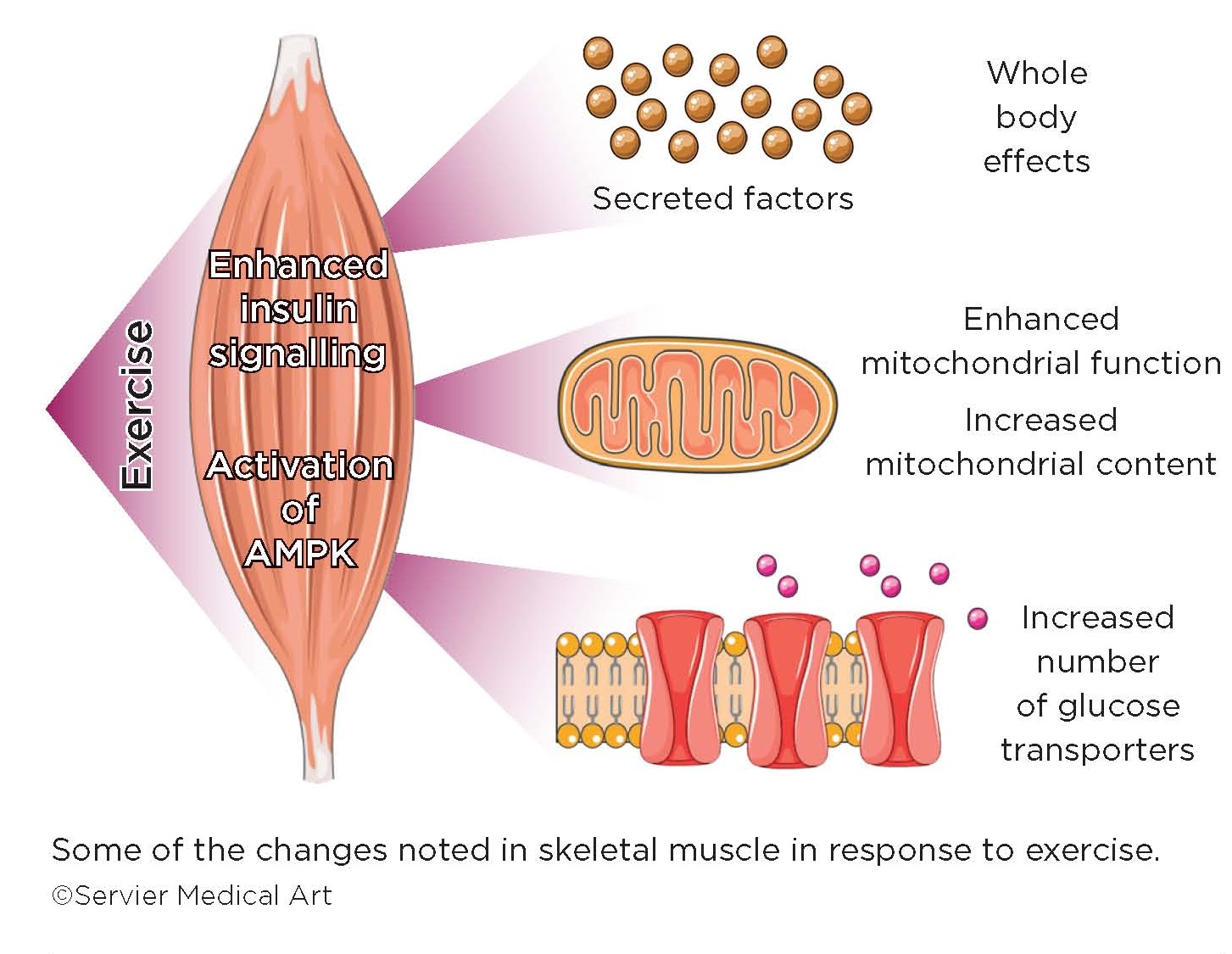 In response to a rise in blood glucose, insulin is rapidly released from the pancreas, leading to increased glucose uptake, primarily into skeletal muscle and adipose tissue. Muscle contraction also results in a similar and rapid increase in glucose uptake into the working muscle. Contraction-activated glucose uptake does not utilise the same molecular pathways as insulin, and occurs also in the absence of insulin, making this pathway an attractive target for bypassing insulin resistance.

Uncovering the molecular mechanisms that mediate this insulin-independent glucose uptake has been the focus of much recent research, and has led to the identification of a number of different pathways, with the most emphasis being placed on activation of AMP-dependent protein kinase (AMPK). As the muscle performs work and consumes ATP, the ratio of AMP to ATP increases in the muscle, which leads to activation of AMPK. Activated AMPK inhibits energy-consuming biosynthetic and anabolic pathways, while increasing glucose uptake and promoting β-oxidation of fatty acids within the mitochondria, thus serving to restore cellular energy balance. Targeted activation of the contraction-mediated pathway to glucose uptake is a potential strategy to promote glucose uptake into insulin-resistant muscle.

In response to training, i.e. several bouts of repeated exercise, skeletal muscle adapts to increase the number of glucose transporters and number of mitochondria, thus facilitating both the uptake of glucose and the rapid generation of ATP, to meet increased demands.

Activation of AMPK mediates some of the muscle remodelling noted in response to exercise training. However, several other molecular pathways are known to play important roles in both the acute and chronic response to exercise. These include (amongst others) contraction-mediated activation of stress kinases, changes in redox balance and reactive oxygen species, and pathways responding to changes in intracellular Ca2+.

HOW MUCH EXERCISE IS EFFECTIVE?

While training leads to persistent effects in skeletal muscle, even one single bout of exercise leads to an enhancement in skeletal muscle insulin sensitivity. This phenomenon is probably most sharply appreciated by people with insulin-dependent (type 1) diabetes, who need to reduce their insulin doses after performing exercise. The enhanced insulin sensitivity persists for several hours post-exercise and, although the precise mechanisms that mediate this effect are less well explored, there is evidence that activation of AMPK may also play an important role in this effect of exercise.

EFFECTS ON OTHER ORGANS

In addition to local changes within the exercising muscle itself, the contracting muscle generates factors secreted into the circulation with potential to alter the metabolism and function of other organs. For example, brain-derived neurotrophic factor increases in skeletal muscle in response to exercise7 and has been implicated as a potent mediator of exercise-dependent enhancements in learning and memory. Recent evidence also indicates that exercise training alters muscle enzymes that directly modulate circulating levels of kynurenine metabolites to protect from stress-induced depression.8

Numerous other factors have been described which are released from muscle in response to exercise, ranging from hormones to cytokines to microRNAs. However, the nature of the precise signals produced, and the subsequent target tissues, remain to be fully explored.

FACILITATING THE BENEFITS OF EXERCISE

While unravelling the molecular machinery that remodels muscle in a way to promote overall health may lead to new therapeutic insights, a separate challenge is encouraging better exercise habits in the population. Given that lack of time is the most common explanation for failure to exercise, identification of the most beneficial and time-efficient form of exercise should be valuable.

Clearly, not all people respond in the same way, or with the same magnitude, to any given exercise intervention, and a proportion of people have disappointing clinical outcomes even when the exercise appears to have been adequately performed.9 Careful analysis of the exercise response at a molecular level in high as well as low responders will give insights into the relative roles of different exercise-activated molecular pathways, and may be able to inform personalised exercise intervention programmes to ensure maximum benefits.

It is likely that exercise low-responders are over-represented amongst people developing diseases linked to lack of exercise. Since this population is likely to also include people who are less able to exercise, finding effective pharmaceutical exercise mimetics will be helpful, although to date this has been challenging. In the meantime, identifying the most effective type of training programme for each person should improve the efficacy of exercise interventions, and lead to important public health benefits.

An ageing population: the nature of healthcare and our need to adapt
Top
Beyond the ovary: steroids and PCOS