Despite this, there remains a worryingly high recurrence rate for many patients who have undergone chemotherapy and/or biotherapy. Indeed, ERα-positive breast cancer patients treated successfully with surgery and aromatase inhibitors still have an approximately 20% chance of breast cancer recurrence. Thus, there remains an unmet need to develop new drugs to improve outcomes.

THE PATHWAY TO DRUG DEVELOPMENT

I have been fortunate to have been immersed in this research area for most of my scientific career. Indeed, through my work and the collaboration of many others, I’ve seen most aspects of the drug development of various novel compounds that target both hormone-dependent and hormone-independent cancers. Moreover, irosustat (a compound that I did much pre-clinical research on) has entered clinical trials and is now being considered for a range of hormone-dependent malignancies. However, this drug development path has been fraught with difficulties, but is an interesting story of the rollercoaster and sometimes brutal route from drug discovery to patient care.

Let’s start in 2004 when I joined Sterix Ltd, a spin-out company of Imperial College London, supported by Ipsen. It was my second postdoctoral position, and I had limited knowledge of drug discovery or even steroids. The next few years rapidly reversed this ignorance.

Unfortunately, I cannot claim to having discovered and initially developed irusostat (also known as STX64 or 667Coumate), a highly specific, highly potent

‘Initial promising results were somewhat undermined due to a poorly designed follow-up clinical trial that had limited input from the original scientific team who had identified irusostat in the first place.’

STS catalyses the desulfation of generally inactive sulfated steroids and thus is considered an important activating step for hormones. With regards to hormone-dependent breast cancer, the key steroid is oestradiol, which binds ERα to stimulate growth. Blocking oestradiol synthesis and action has been the cornerstone of breast cancer therapy for over 40 years. Aromatase and STS both synthesise oestrogen from steroid precursors (see Figure) and so inhibition of these pathways is an attractive therapeutic target. 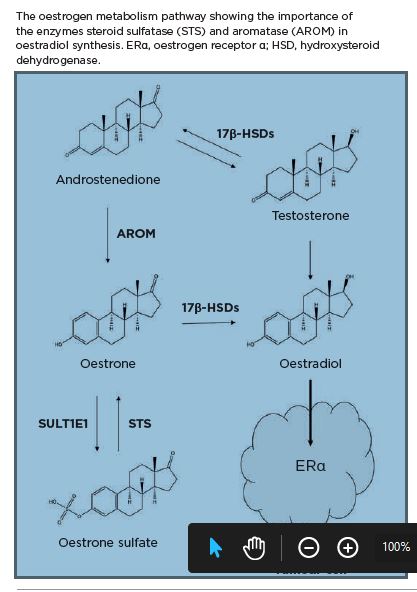 After preclinical success, irusostat was taken forward to a ‘first-in-class’ phase 1 clinical trial for patients with hormone-responsive breast cancer. Initial results were hugely encouraging, with a 5mg/kg oral dose of irusostat for 5 days resulting in 98–99% inhibition of tumour STS activity and significant reduction of serum levels of oestrone (by 76%), oestradiol (by 39%), dehydroepiandrosterone (by 41%), androstenediol (by 70%), androstenedione (by 62%) and testosterone (by 30%). Importantly, 4 out of the 14 patients recruited showed signs of stable disease: no mean feat in these difficult-to-treat patients who had progress on standard therapies.1

Frustratingly, these initial promising results were somewhat undermined due to a poorly designed follow-up clinical trial that had limited input from the original scientific team who had identified irusostat in the first place. This second trial did not stratify patients and thus allowed all breast cancer patients, irrespective of their hormone status, to be treated with irusostat. Consequently, treatment was significantly less effective when compared with the first trial which had focused only on ERα-positive breast cancer patients. This was a significant setback for the continued development of STS inhibitors, and was a lesson on how poor planning can dent even the most robust drug development projects.

Irusostat received a further knock to its progress through another clinical trial, this time in patients with endometrial cancer. Irosustat performed well, with an increased number of patients with more stable disease (47%) compared with the current standard therapy (32%) – the progestin megestrol acetate (MA). However, overall, there was no statistically significant difference between the groups with regards to patient response or survival rates.2 Thus, the trial was halted early.

These setbacks made it increasingly challenging to garner support for STS inhibitors to advance further into clinical trials. But we had another therapeutic strategy up our sleeves that would help drive further irusostat clinical trials. This was the concept of dual aromatase sulfatase inhibitors, or DASIs.

As part of our company’s drug pipeline, we had been developing DASI compounds since the mid-2000s; these had shown excellent efficacy in preclinical models of breast cancer.3 Targeting both aromatase and sulfatase was a no-brainer and provided interesting chemical entities and novel dual action efficacy. These studies informed the way forward: clinical trials overseen by Cancer Research UK to test irusostat in combination with an aromatase inhibitor (the IRIS trial). This trial reported in 2017 and showed evidence of clinical benefit which underpinned the scientific concept of STS inhibition.4 Larger studies are now required, with further clinical development still on the cards.

Although I have now moved on from the further development of irosustat, my own research laboratory still heavily focuses on these areas of research, albeit in new, emerging ways. We have recently shown that STS inhibition may be beneficial in treating a subset of colorectal cancer tumours that are oestrogen-responsive5 and we continue to develop novel STS inhibitors with excellent potency.6 Thus, there remain many new drug development avenues in this area that should see new inhibitors of oestrogen metabolism playing an important role in cancer research for the foreseeable future.