UEMS: much more than an acronym 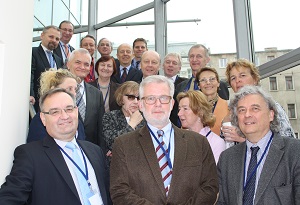 Members of UEMS Endocrinology at their 2015 meeting

The UEMS (Union Européenne des Médecins Spécialistes) is central to the development of standards for training and education in European endocrinology, and in representing the field at the highest level politically. Here, colleagues from the UEMS Section & Board of Endocrinology (UEMS Endocrinology) update us on the recent review of the training curriculum, and contemplate the impact of Brexit.

FIFA, UEFA … UEMS: we know what they do (well, the first two at least), but what do the acronyms actually stand for? In fact, all these bodies date from the pre-Anglosphere mid-20th century era when French was still the international language of diplomacy. Otherwise, we would have had IFFA (International Federation of Football Associations), EUFA (European Union of Football Associations) and EUSD (European Union of Specialist Doctors).

The national medical associations of the countries in the EU and European Economic Area (EEA) are full members of the UEMS, with adjacent countries having observer status. Fifty medical disciplines are represented, not including general practice, of which the most important are covered by 39 specialist sections, including ‘Endocrinology, diabetes and metabolism’.

THE ROLE OF UEMS

The UEMS represents medical specialists at the level of the European Commission and other EU bodies, and sets standards for the accreditation of training and of continuing medical education. Over the past decade, many of the specialty sections and boards have also established specialty certifying exams, akin to those of the UK Royal Colleges, with endocrinology being set to follow soon. For this reason, we identified a need to revisit our training curriculum.

Back in 1991, UEMS Endocrinology produced an outline curriculum under Chapter 6 of the UEMS Charter, known as the ‘Leuven/Louvain Document’. It now seems utterly sensible and uncontentious, simply because so much of it has been implemented (2 years of core training in general internal medicine (GIM), plus 4 years of higher training in endocrinology), but it was truly progressive and radical at a time when the UK and Ireland didn’t even have fixed entry and exit points for training.

As an exchange Senior House Officer working in The Netherlands in 1991, Richard Quinton was asked by AJ van der Lely (then a fellow trainee, now President of the European Society of Endocrinology) whether or not he was ‘in opleiding’ (training). To this, he could only reply that, in the UK, this would only be revealed in the future, depending on whether or not he was eventually appointed to a consultant post! For other countries, the suggestion of a ‘common stem’ of GIM prior to entry into training proved equally traumatic to die-hard traditionalists.

In 2016, UEMS Endocrinology established a working group to dust-down the original 1991 curriculum and bring it into the 21st century. We had anticipated that this might be an onerous task, given the passage of time, but we found that it remained scintillatingly relevant.

The revised version maintains the ‘2+4 year’ model (of which, 1 of the 4 years can be spent undertaking related experience, e.g. in a clinical or research laboratory, or in GIM). But it also incorporates advances in disease genetics, diagnostic imaging and multidisciplinary team-working, and it emphasises the centrality of communication/negotiation skills to our specialty. Like the original document, its purpose is as a broad outline, intended to underpin curricula developed by European national bodies or specialist/scientific societies.

And what of Brexit? Provided the UK remains within the EEA, then nothing changes. However, if it finds itself outside the EEA, then the UK delegate will retain observer status without voting rights, like their Turkish counterpart. However, UK training will still need to conform to the European model, in order to retain mutual specialist training recognition, and the Royal College of Physicians will probably need to continue paying its annual membership fee to the UEMS.

Now, does that sound like a wider metaphor for the post-Brexit UK’s relationship with the EU?

The authors are all National Delegates to UEMS Endocrinology from their home countries. Anton Luger is President of the Endocrinology Section, and Hans Perrild is Executive Committee Member with responsibility for Continuing Professional Development/ Continuing Medical Education.