What do endocrinologists and psychiatrists have in common? No doubt, some readers of The Endocrinologist will have reflected on this already, possibly tongue in cheek, but here are a few more earnest observations.

Both disciplines concern themselves with diseases that influence cognitive functions, sleep pattern and appetite. Stress often seems to have a destabilising impact on a patient’s condition. Psychiatrists typically have no hang-ups about the role of emotional stress in destabilising their patients. Endocrinologists, on the other hand, tend to be a little prudish.

Maybe it’s a cultural thing? Ask a German or a Dutch endocrinologist whether they advise their adrenal patients to up-dose for emotional stress and they are fairly permissive.1 Ask a British endocrinologist and you are likely to receive some bracing remarks about bone density and a stiff upper lip.2

THE HISTORICAL RECORD ON STRESS AND STABILITY 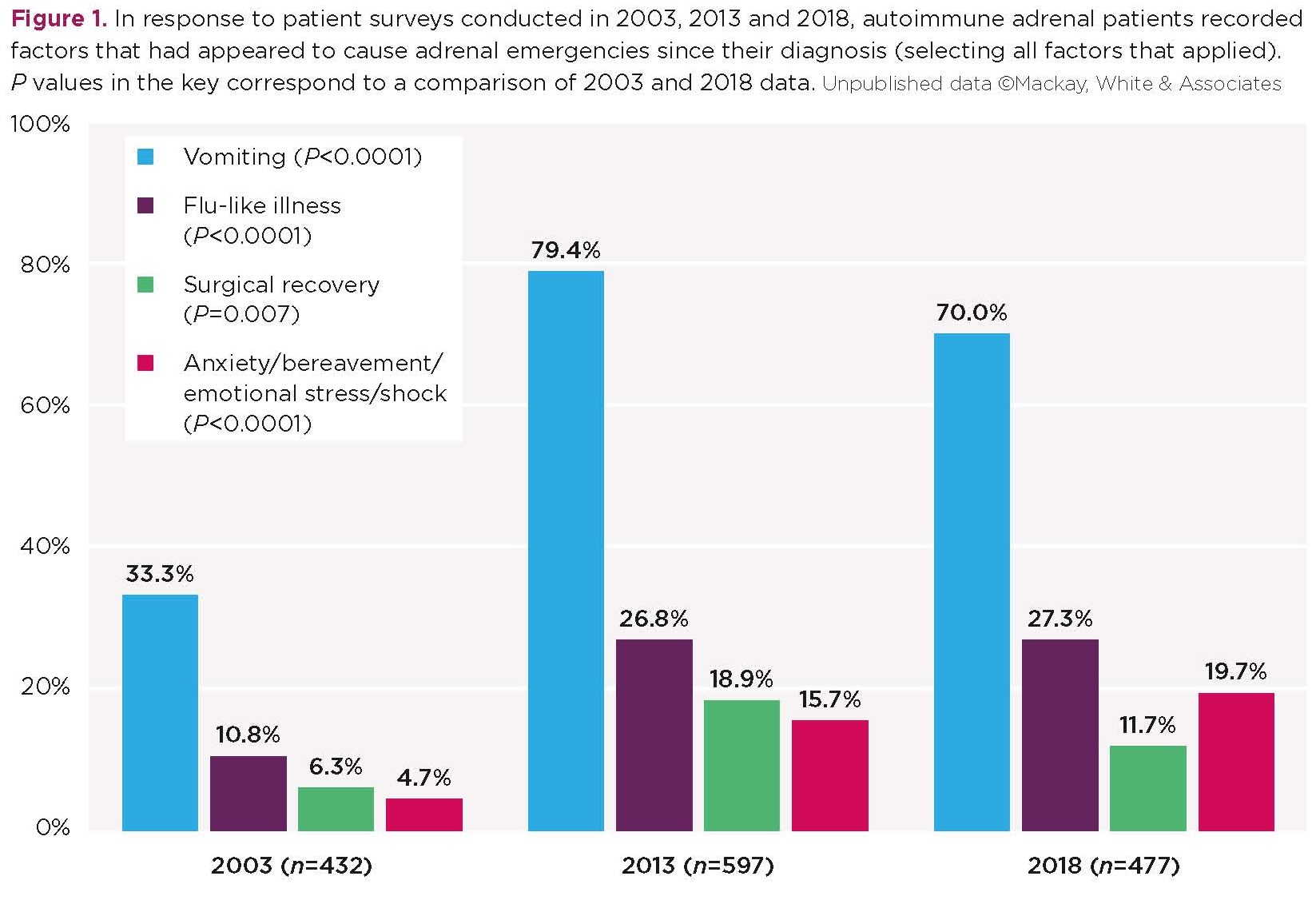 So, other than clinic anecdata, what is the evidence base for hydrocortisone stress-dosing for psychological as well as physical challenges? Patient questionnaires give a useful starting point.

In three consecutive patient surveys, conducted 10 and then 5 years apart (2003, 2013 and 2018), we asked adrenal patients to list the trigger factors that had contributed to their previous episodes of adrenal crisis (Figure 1). The questionnaire offered a tick box list of prompted items, plus space to write comments.

Respondents in all three surveys were members of various adrenal support groups (Table). The average time since diagnosis was broadly consistent: 12.8 years in 2003, 12.2 years in 2013; 11.5 years in 2018. The 2013 and 2018 surveys were conducted online using Survey Monkey, while the 2003 questionnaire was distributed as a paper copy with a pre-paid return envelope. Here’s what patients reported.

In 2018, one in five adrenal patients checked the box to say that anxiety, bereavement or emotional stress had been a trigger factor for a previous adrenal crisis. That’s 94 of 477 replies, or 19.7%.

Five years earlier, in 2013, we asked the same question. There were small differences, but they were not statistically significant. Fifteen years earlier, in 2003, the question about causation had been worded less specifically, asking if ‘shock’ had been a trigger factor. Just 3.6% (27 of 432 replies) said yes. Another 1.1% wrote in that psychological upset had triggered an adrenal crisis, making 4.7% in total. 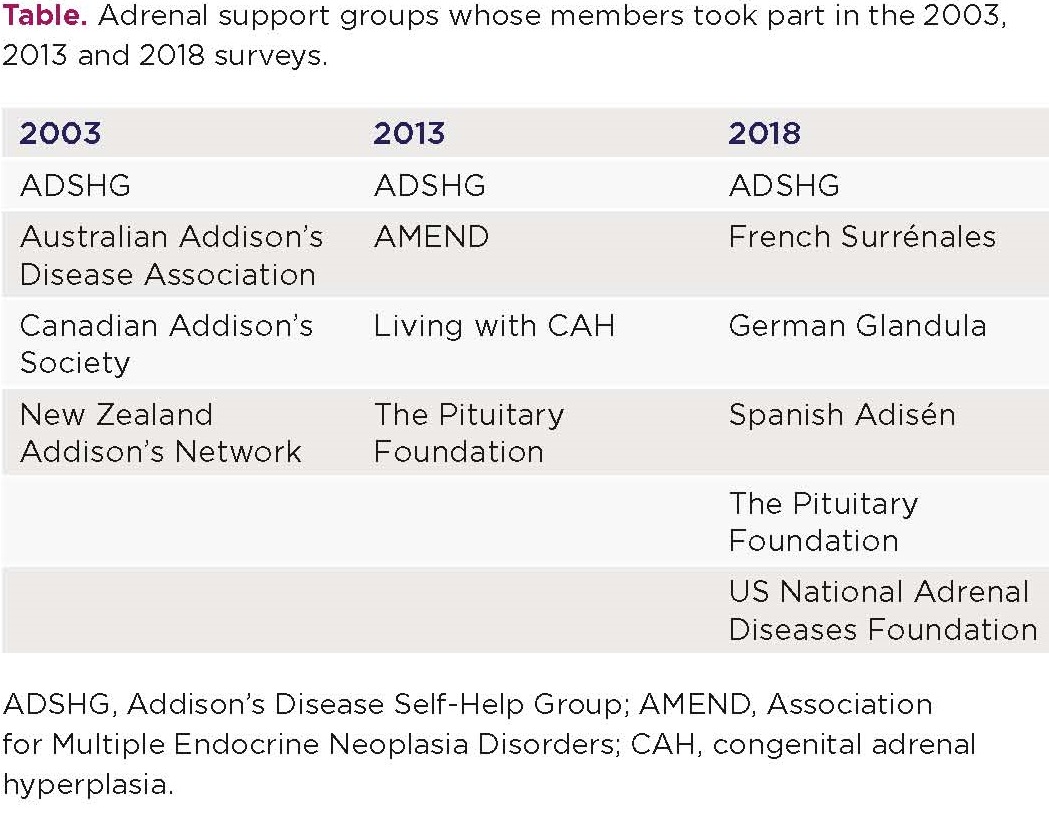 Over the same 15-year interval, the proportion of patients reporting a previous adrenal crisis also went up markedly. In 2003, over half of all respondents (54.5%) said they had never experienced an adrenal crisis post-diagnosis. That crisis-free cohort shrank to one-third of respondents (32.4%) by 2018 (Figure 2). 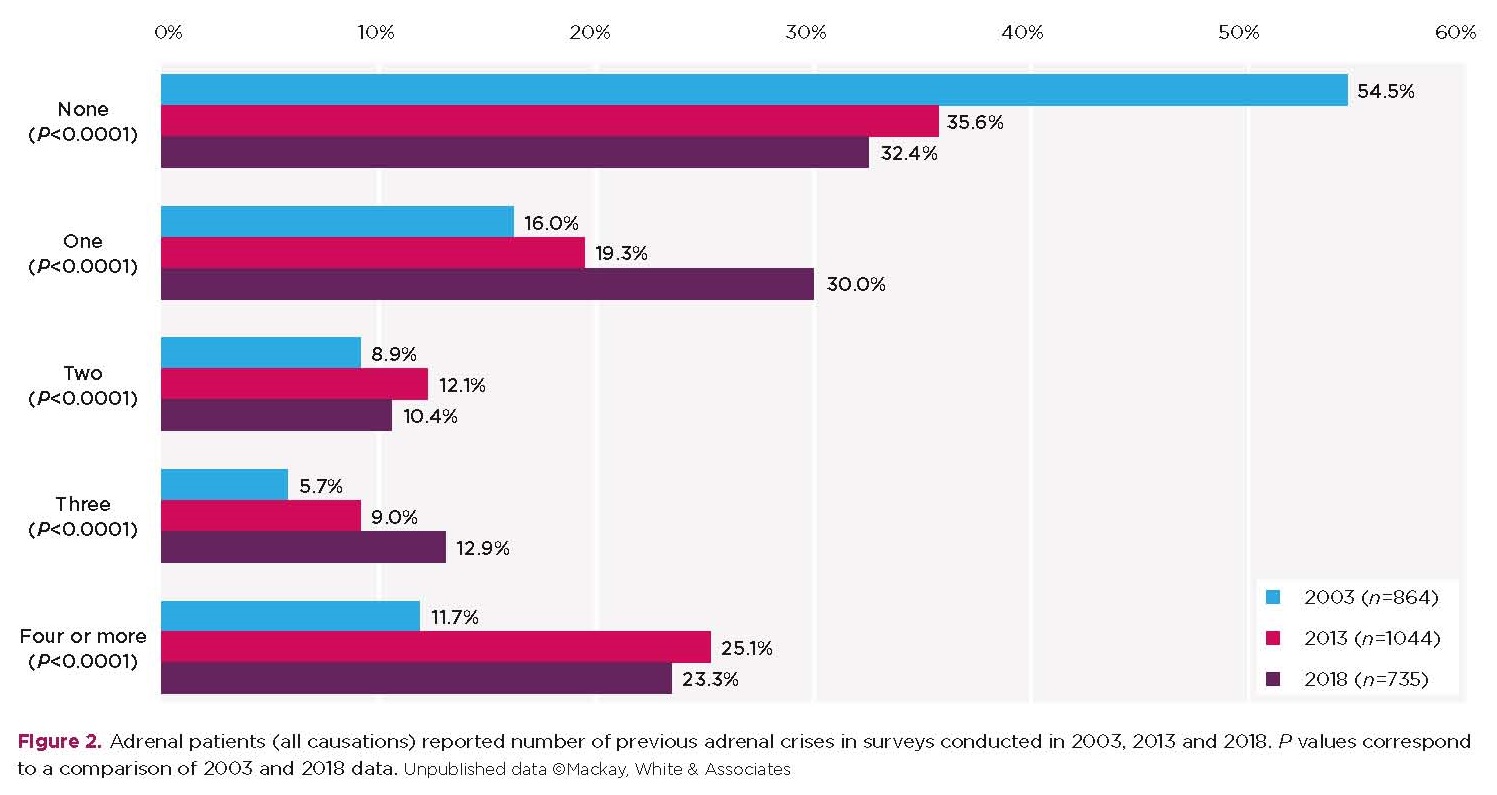 So what has changed to destabilise adrenal patients? Are NHS endocrine units now so severely under-resourced that clinicians are neglecting patient education about sick day rules, perhaps?

We can discount that hypothesis because these datasets are wholly derived from patients belonging to an endocrine charity, the majority being members of the Addison’s Disease Self-Help Group. Over the 15-year period, the range of informational materials produced by the various adrenal charities has been considerable, and patient access to these materials through social media has transformed patients’ educational opportunities.3 By the time of the latter two surveys, the patients in these datasets were considerably better informed about the necessity for dosage adjustments and/or injected steroids in the event of intercurrent illness or major injury, when compared with those in 2003.

Over the same 15 years, daily hydrocortisone doses reduced appreciably, as many readers will be aware. While maintenance doses are now believed to be more closely aligned with ‘normal’ physiological values,4,5 this appears to leave patients twice as vulnerable to adrenal crisis when faced with infectious illness or surgical stress,6 and more than four times as vulnerable to adrenal crisis in emotionally challenging social situations. Patient survey findings suggest that the stiff upper lip just isn’t cutting it.

We must conclude that anxiety and emotional distress need to be taken seriously as destabilising factors with an adrenal safety risk, and newly diagnosed patients should be guided in the development of a tailored self-treatment plan for psychological upset.

Katherine is currently studying towards a PhD and is available for small consultancy projects (kgwhite@mackaywhite.co.uk).