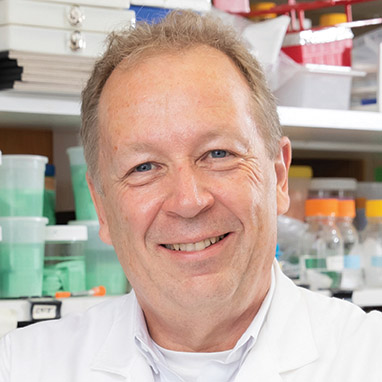 Philipp Scherer is Professor and Director of the Touchstone Diabetes Center at the University of Texas Southwestern Medical Center in Dallas, TX, USA. Throughout his career, he has maintained an interest in processes related to cellular and systemic energy homeostasis, with a special focus on the adipocyte. He identified adiponectin, one of the first secretory factors to be described that almost exclusively originate in adipose tissue.

He presented his Transatlantic Medal Lecture ‘Adipose tissue organ crosstalk in health and disease’ at SfE BES 2022. We caught up with him to learn more about his career, research and academic inspiration.

Tell us about your career so far

I was born and raised in Switzerland, and ended up undertaking my PhD in biochemistry at the University of Basel. I then moved on to the Whitehead Institute at Massachusetts Institute of Technology as a postdoc, before accepting a faculty appointment at the Albert Einstein College of Medicine in New York. I was there for 10 years and built a programme in the area of adipose tissue physiology.

In 2007, I joined the University of Texas Southwestern Medical Center as the head of the Touchstone Diabetes Center. Here, my primary focus is on adipose tissue, biology and physiology, and how this fits into the bigger picture of a number of pathophysiological states, including diabetes. I’ve now been there for 15 years, and try to carry the heritage of the Swiss mountains with me to the flatlands of Dallas and the heat of the southwest USA.

How has the study of diabetes changed?

We have definitely moved into the era of omics large-scale generation of data at every level, which includes a lot of data from preclinical models and is our strength. Mouse genetics, and how we analyse these mice, have also made major technological leaps forward. Recently, we developed high spatial resolution, in terms of actually applying these omics technologies to relatively small, defined areas within tissue, even down to the level of the single cell. That has been quite the game changer, in terms of how we approach the disease state at many different levels.

What achievements are you most proud of, so far?

I’ve certainly contributed to some key findings, including a number of molecules that are considered important in our field. One of those molecules is adiponectin. Another that’s becoming rapidly more ‘popular’ is endotrophin. In my area of research, we take pride in the fact that we’ve hopefully managed to put the fat cell ‘centre stage’ as an endocrine cell and defined its interactions with other cell and organ types.

In academia, I also take pride in my academic offspring, including the ability to place many of my trainees in tenure-track positions at universities, or to see them flourish in a pharmaceutical or biotech environment. That’s a legacy that I’m very proud of.

Who has had the biggest impact on your career?

Mentors, during the early stages of your career, play a major role. I was mentored in my PhD by Gottfried Schatz, renowned for his contributions in defining the biogenesis of mitochondria. My postdoctoral mentor, Harvey Lodish from the Whitehead Institute, brought the adipocyte to my attention as an interesting cell type. I certainly learned a lot from Harvey, not only about the science, but also in terms of running a scientific programme. This included growing a lab, and managing all the different demands you face day-to-day when you have a large number of people working around you. Those are the two key people from the formative years of my career that had a great impact.

I’ve also profited a great deal from my colleagues at the Albert Einstein College including, amongst many others, Michael Brownlee and Luciano Rossetti, who both contributed significantly to my career development. The field of metabolism is great to work in, with a lot of good people and a healthy competitive environment.

What are the biggest challenges in your field?

We have a lot of unsolved problems. We are 100 years beyond the discovery of insulin, yet we haven’t cured diabetes per se. Major leaps have been made, but many big questions remain concerning the set points for our adiposity.

The holy grail of adipose tissue research is how to learn more about fat as a signalling entity. How is the initial set point for adiposity established and maintained in a way that the body returns to its maximal adiposity, even after pharmacological intervention, which can see 20–25% weight loss?

What was the focus of your lecture at SfE BES 2022?

I emphasised the endocrine role of adipose tissue and its multifaceted actions in influencing both the local microenvironment and cross-communication with a range of other organ systems. We still have so much to learn about adipose tissue-derived communication. Fat is one of our major endocrine organs in terms of size and absolute amount. So, I tried to share some of the excitement that is developing in the field around the multiple aspects of adipose tissue physiology and endocrinology.

What are your words of wisdom for future endocrinologists?

We still have a lot of problems to solve, which ultimately means this is a research area that it’s worth getting into. Particularly as an endocrinologist, you’re at the interface between the clinic and the bench, where you can address issues more mechanistically. It’s a rapidly evolving and exciting field. There is a very broad set of techniques that we can apply to our research, so it’s never going to be boring. I recommend getting into the field and interacting with key people. I hope we can continue to recruit talented people into the areas of metabolism and endocrinology.

Find out about the Society's medal programme 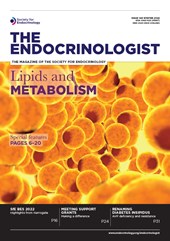